Before I actually talk about this book, can I just say how exciting it is to finally win a Goodreads First Reads giveaway? Thank you, Goodreads, and thank you, McSweeney’s McMullens! It’s quite a treat to win a book that I would have been eager to read no matter what.

The Expeditioners books are set in a steampunk-ish world, where computers have been proven to be failures, travel is steam-driven, and the world that we know turns out to be missing quite a bit — such as all the previously unknown, secret lands. The Bureau of Newly Discovered Lands (BNDL) controls the discoveries and plunders their resources, and the most important people in the new economy may be Explorers of the Realm, who set out on expeditions of all sorts to discover the planet’s secrets, often risking life and limb.

Our main character is Kit West, a teen-aged boy whose father went missing under mysterious circumstances, leaving Kit, older brother Zander, and younger sister M.K. orphans. In the first book, Kit is given a clue left by their father, which propels the siblings on a cross-country adventure to solve the puzzles and cryptic maps strategically hidden by their father.

In the 2nd book, Kit, Zander, and M.K. are students at the Academy, a training ground for the next generation of Explorers. (Think Hogwarts, minus magic, plus gadgets and missions.) Kit is still puzzling over a new map which they found at the end of their first adventure, sure that it contains yet another lead from their father, one that may bring them closer to understanding his secrets and his disappearance. A competition to design and lead the school’s annual expedition leads the three, along with best friend Sukey and arch-nemesis Leo Nackley, to a sea voyage to the equivalent of the Bermuda Triangle. There, Kit believes the unexplainable ocean phenomenon that has led to countless shipwrecks will also reveal their father’s next clue — but Leo Nackley and his powerful father think they’ll discover oil, which in turn will allow the Realm to wage war against other empires by fueling more deadly weapons of destruction.

The Wests and Sukey end up shipwrecked, and that’s not all. The book includes submersibles, pirates, constrictor eels, telepathic turtles, Caribbean islands, and intrigues and conspiracies galore. There’s also a smattering (but not too much) of teen angst, as Kit’s crush on his close friend Sukey turns to hurt and anger when she seems to fall for Zander instead.

One thing I love about the Expeditioners books is how smart and gifted the characters are. Kit is a cartography expert, Zander studies biology and wildlife, M.K., the youngest of the family, is a marvel when it comes to engineering, and Sukey is a talented aviator. Girls are just as strong and competent as the boys, and just as likely to wield a sword against dangerous pirates or fight off a new enemy with an amazing piece of technology. Kit and the gang use their wits to survive and outsmart their opponents, but they never have it easy and nothing comes without new risk.

Black and white illustrations by Katherine Roy enhance the story’s flow and add greatly to the sense of the characters and their world. The inside of the dust cover includes schematics for M.K.’s submersible, and there are maps and old journal pages sprinkled throughout as well.

The action never stops, and while it’s occasionally a chore to keep straight the various government agencies and the geopolitical factions, the main thrust of the story is the West kids and their quest to follow their father’s clues. By the end of this book, there are cracks forming in the siblings’ unwavering commitment to their quest, however, and Kit and his family seem about to be heading off in different directions, scattered by their new assignments and moving forward separately instead of as a team.

Expeditioners #2 (sorry, that’s a lot easier than typing out the full title) has an open-ended conclusion, clearly laying the groundwork for more to come. From what I’ve seen mentioned on a few websites, The Expeditioners is expected to be a six-part series, which means there’s plenty of excitement ahead.

I highly recommend this series for anyone who enjoys kids’ adventure tales — and that includes grown-ups too! My 12-year-old and I made this a joint reading project, and we both loved it. I can see The Expeditioners appealing to Harry Potter fans as well as fans of Philip Pullman’s His Dark Materials trilogy… and as a fan of both, I don’t say that lightly. The Expeditioners has a rich and unusual world for its super-smart and super-engaging characters to explore. I can’t wait to see what’s next!

Want to know more? Check out my review of the first book in the series, and also this great Q&A with author S. S. Taylor. 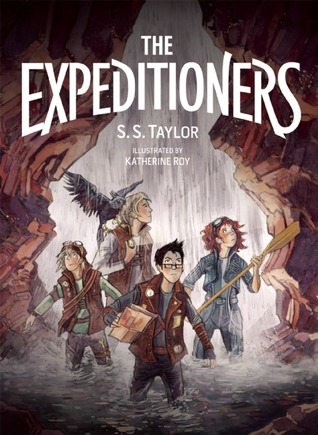