From Marie Benedict, best-selling author of The Only Woman in the Room and Lady Clementine, comes a captivating work of historical fiction about a young female spy who may have changed the course of American History.

The tide is turning against the colonists in the Revolutionary War, and 18-year-old Elizabeth Morris cannot sit by idly. Quietly disdainful of her Tory parents, who drag her along to society events and welcome a British soldier into their home during their occupation of New York City, Elizabeth decides to take matters into her own hands. She realizes that, as a young woman, no one around her believes that she can comprehend the profound implications of being a nation at war – she is, effectively, invisible. And she can use this invisibility to her advantage. Her unique access to British society leads her to a role with General George Washington’s own network of spies: the Culper Ring.

Based on true events, Agent 355 combines adventure, romance, and espionage to bring to life this little-known story of a hero who risked her life to fight for freedom against all odds.

Agent 355 takes a mysterious historical figure, imagines who she might have been, and gives her a moving and powerful story of her own.

Little is known about the real-life Agent 355. She was believed to be a spy in the Culper Ring, the network providing key intelligence to George Washington during the Revolutionary War. Agent 355 was female, and is believed to have been someone well-connected, with access to British officers through social settings. Her identity has never been firmly established, although there are many theories (see Wikipedia) as well as a variety of pop culture interpretations.

In Marie Benedict’s version, Agent 355 is young socialite Elizabeth Morris, daughter of affluent New York Loyalists who regularly socialize with the British officers quartered in New York. Elizabeth is bored and frustrated, and aches for a way to make a difference. While at a party that her parents have forced her to attend, she realizes that the officers talk openly in her presence, as the women in attendance are not taken seriously, seen as pretty decoration and nothing more.

A chance encounter with Robert Townsend, a merchant and rebel sympathizer, provides Elizabeth with the means to put a plan into motion. Soon, she’s providing key intelligence to the Culper Ring, including data on troop movements and information about possible traitors within Washington’s own corps of officers.

The audiobook is short but powerful. As Elizabeth tells her story, we enter into the dangerous life of a brave woman who knows that any mistakes could cost her everything. The pace becomes more and more breathtaking as the story moves forward, and by the end, it’s both tragic and a moving testament to the courage of a woman lost to history — but who may have made all the difference.

Author Marie Benedict’s concluding notes describe her mission to tell the stories of the women who get overlooked in the historical records. Here, she succeeds in bringing this Revolutionary War hero to life. I look forward to reading more of her work.

Agent 355 is a free selection for Audible members this month. I strongly recommend checking it out!

My book group is continuing with our slow and steady re-read of book #8 in the Outlander series, discussing two chapters per week (and with 145 chapters, as you can imagine, it’ll take us a while yet to get through it all!) Here’s a snippet from one of this week’s chapters that made me smile — a little exchange between a Quaker and a Scot/Mohawk who are soon to become brothers-in-law:

A certain tenseness in Denny’s shoulders relaxed. “Scouts are not required to kill the enemy, are they?”

“No, we’ve our choice about it,” Ian assured him, straight-faced. “We can kill them if we like — but just for the fun of it, ken. It doesna really count.”

Everyone once in a while I feel like writing about something other than books (shocking, I know!)… and one of my favorite non-reading activities is watching TV. The spring season has just wrapped up, and I find myself with only three ongoing series on my DVR queue. Which is a good thing, in a way — more reading time in the evenings! I’ve cut way back on my commitment TV, but there are some shows that I absolutely love, and some that have only recently joined the list of my TV favorites.

One of the newer-to-me shows is AMC’s TURN. Close to the end of its second season, Turn has grown on me steadily since the beginning, and at this point, I’m totally hooked.

Turn is the story of the legendary Culper Ring, George Washington’s network of spies whose intelligence gathering changed the course of the American Revolution.

Check out the season 2 preview trailer for a taste:

I’m seriously into this show. The development has been something of a slow burn, and it took me a few episodes of the first season to really get a handle on the players and the stakes. Ultimately, the characters are what make the show, and they’re terrific.

There are the biggies — George Washington and Benedict Arnold, among other well-known historical figures. Other people from the history books may be less immediately recognizable, but were in fact the key members of the Culper Ring: Abraham Woodhull, Benjamin Tallmadge, and Caleb Brewster, among others.

I hate to admit it, but I’ve become a little unreasonably infatuated with British spymaster John André, who is portrayed on the show with oodles of swagger and sex appeal (and has an endearing side braid that fascinates me all by itself):

If you need more convincing, how about this:

Why do I love Turn?

The acting is terrific, the story is fast-paced and twisty-turny, and the stakes are incredibly high. We all know how it turns out… but do we really know why? The intrigues are fascinating, and while we may think of redcoats and muskets as quaint elements of the past, seeing them in action makes the danger feel real. The weaponry is from the 1700s, but the human lives on the line are as vulnerable as ever.

I was surprised by how much tension and suspense a show about historical events could deliver. After all, we do know so much about the time — but seeing how these events unfold is constantly a thrill, especially as we’ve come to know the characters and understand who they are and what they’re risking for their beliefs.

The cast is superb (and okay, really good-looking). There are heroes and villains, some totally crazy-pants bad guys, dashes of romance, and even some rather funny bits mixed in… Hey, on the last episode, there was even a wooden mini-submarine. (It’s from HISTORY, yo. The Turtle — go look it up!)

As a side note — because I never do seem to write many posts that don’t mention Outlander in one way or another — the time period ties in nicely with the events in books 7 and 8 in the Outlander series, An Echo in the Bone and Written In My Own Heart’s Blood. Fans of the book series will especially enjoy seeing some of the people, places, and occurrences familiar from the books from a new and different perspective. (No Jamie Fraser, but you can’t have everything.)

Want to know more about the history of the Culper Ring? Here are some good basics.

Meanwhile, if you’re looking for something intelligent and absorbing to occupy your vacant TV-watching hours, give Turn a try!

Do you watch Turn? What do you think of it so far? Share your thoughts in the comments!

Flashback Friday is a weekly tradition started here at Bookshelf Fantasies, focusing on showing some love for the older books in our lives and on our shelves. If you’d like to join in, just pick a book published at least five years ago, post your Flashback Friday pick on your blog, and let us all know about that special book from your reading past and why it matters to you. Don’t forget to link up!

This week on Flashback Friday: 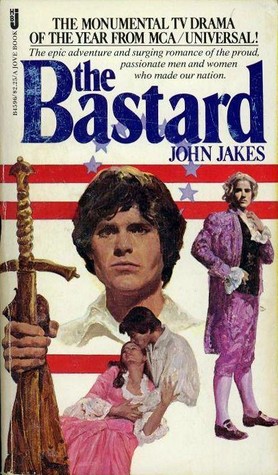 Meet Phillipe Charboneau: the illegitimate son and unrecognized heir of the Duke of Kentland. Upon the Duke’s death, Phillipe is denied his birthright and left to build a life of his own. Seeking all that the New World promises, he leaves London for America, shedding his past and preparing for the future by changing his name to Philip Kent. He arrives at the brink of the American Revolution, which tests his allegiances in ways he never imagined. The first volume of John Jakes’s wildly successful and highly addictive Kent Family Chronicles, The Bastard is a triumph of historical fiction

Happy 4th of July! In honor of Independence Day, I thought it would be appropriate to choose an historical novel set during the American Revolution — and how can you beat The Bastard, book #1 in John Jakes’s eight-book Kent Family Chronicles?

The books has had several reprintings over the years, but in my mind, you really need this particular cover — with that cheese-tastic 70s feel — to truly grasp the glory of The Bastard. Does it help to know that this was made into an oh-so-popular mini-series as well?

But seriously, beneath the melodrama, The Bastard does what historical fiction does best: Invest historical events with a personal story revolving around compelling fictional characters, drawing readers in and making the real events from the past come alive on the page.

So… Happy 4th, one and all! And tonight, while you’re watching the fireworks, raise a cup to fictional heroes like Philip Kent as well!

What flashback book is on your mind this week?

Note from your friendly Bookshelf Fantasies host: To join in the Flashback Friday fun: