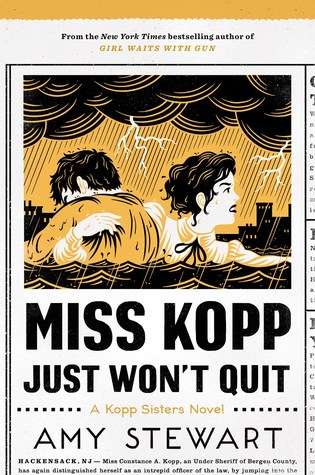 After a year on the job, New Jersey’s first female deputy sheriff has collared criminals, demanded justice for wronged women, and gained notoriety nationwide for her exploits. But on one stormy night, everything falls apart.

While transporting a woman to an insane asylum, Deputy Kopp discovers something deeply troubling about her story. Before she can investigate, another inmate bound for the asylum breaks free and tries to escape.

In both cases, Constance runs instinctively toward justice. But the fall of 1916 is a high-stakes election year, and any move she makes could jeopardize Sheriff Heath’s future–and her own. Although Constance is not on the ballot, her controversial career makes her the target of political attacks.

With wit and verve, book-club favorite Amy Stewart brilliantly conjures the life and times of the real Constance Kopp to give us this “unforgettable, not-to-be messed-with heroine” (Marie Claire) under fire in Miss Kopp Just Won’t Quit.

Four books in, the Kopp Sisters series is going strong! Constance Kopp is an independent, strong, career woman — at a time when these were not considered desirable attributes for a female. She works as a deputy sheriff at the Hackensack jail, where she essentially does double duty, both capturing criminals and carrying out deputy funtions, and serving as the jail’s matron for female inmates, whom she views as her charges.

Both Sheriff Heath — a fair-minded man who treats Constance as a colleague and professional, a rarity in the law-enforcement world — and Constance believe in prison reform, the idea that treating prisoners as people with options for redemption will actually lead to less crime overall. Constance takes a particular interest in the young women who often find themselves incarcerated for being wayward or otherwise uncontrollable, working with a sympathetic judge to get them released on probation, under her supervision, and finding them safe living situations, opportunities for decent work, and the chance to educate themselves and improve their lives.

All this is threatened by the 1916 elections. Sheriff Heath has termed out of his role and is running for Congress, and the sheriff’s position is hotly contested beween a man who detests Constance and a man who sees her as a cute affectation. In describing the tone of the campaign, author Amy Stewart adeptly shows how dirty politics isn’t new to today’s political climate. Sheriff Heath, perhaps naively, believes that elections can be won or lost on the merits of a candidate:

“Miss Kopp, Don’t you see that it’s better for us this way? He’s putting all his worst qualities right out on display for the public to see. You notice that he hasn’t said a word about what a sheriff’s actual duties might be, or why he’s best qualified to carry them out. A man who does nothing but cast out hate and blame couldn’t possibly be elected to office.”

As always, Constance Kopp — who is a real person, and whose history Amy Stewart draws upon for the events of the novel — is a stunningly strong, honest, and dedicated woman. She believes in her purpose, and constantly puts her own interests second to her duty to the public and to her inmates. In Miss Kopp Just Won’t Quit, we spend a bit less time with Constance’s sisters Norma and Fleurette, who feature much more prominently in earlier books. Still, their home life and interesting personality dynamics are always entertaining to read about.

By the end of the novel, circumstances have changed dramatically for the Kopp sisters, and it would appear that their lives are about to enter an entirely new phase. And while I’m sad to see the partnership between Constance and Sheriff Heath reach an ending of sorts for the moment, I’m still as invested as ever in these people and their lives, and can’t wait to see where they go and what they do next.

I’ll wrap up by repeating almost exactly what I wrote at the end of my review for the 3rd book, Miss Kopp’s Midnight Confessions:

A final note: I listened to the audiobook, and it’s wonderful! Narrator Christina Moore has a gift when it comes to these characters, making each sister distinct, as well as the rest of the characters, whether working class New Jersey girls or glad-handing politicians or downtrodden housewives. Their voices are sharp and funny and full of personality, just like Amy Stewart’s characters themselves.

If you haven’t had the pleasure of reading the Kopp Sisters books yet, start with Girl Waits With Gun, and then keep going!