A novel based on the forgotten true story of one of the nation’s first female deputy sheriffs.

Constance Kopp doesn’t quite fit the mold. She towers over most men, has no interest in marriage or domestic affairs, and has been isolated from the world since a family secret sent her and her sisters into hiding fifteen years ago. One day a belligerent and powerful silk factory owner runs down their buggy, and a dispute over damages turns into a war of bricks, bullets, and threats as he unleashes his gang on their family farm. When the sheriff enlists her help in convicting the men, Constance is forced to confront her past and defend her family — and she does it in a way that few women of 1914 would have dared.

Guys, Girl Waits With Gun may be the most enjoyable audiobook I’ve listened to all year! Fantastic story and characters, and narration that really pulls you into the mood of the story.

But stepping back a moment…

Author Amy Stewart has written several highly successful non-fiction books (with absolutely aweseome titles), including Wicked Plants and The Drunken Botanist. Girl Waits With Gun is her first novel, and is the first in what’s projected to be a series about the historical figures at the heart of the novel.

The Kopp sisters were real people who lived in New Jersey in the early part of the 20th century. After an unfortunate run-in with a powerful, corrupt factory owner, the sisters were threatened and terrorized for months on end. Led by oldest sister Constance, the Kopp sisters sought help from the local sheriff, and persisted in seeing that their tormentor would be brought to justice, no matter the risk to themselves.

The novel fleshes out these historical women and brings them to life, so that we really get to know the personalities and inner workings of the three sisters. Narrated by Constance, we see events through her eyes, and come to understand their small family, the state of politics, unions, and factory owners at the time, and the limitations placed on women by the traditions and societal expectations of the time. 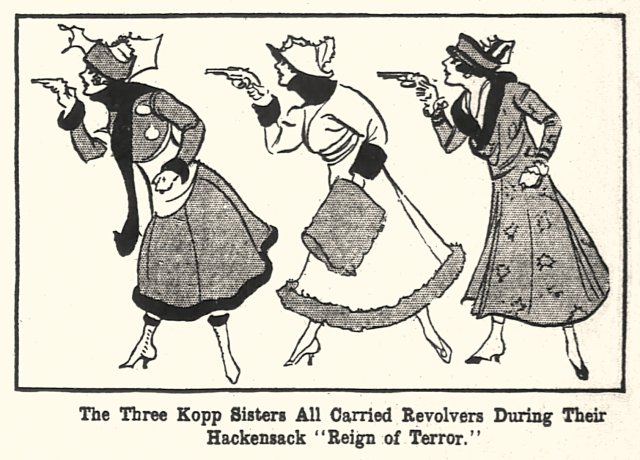 The three sisters are sharply developed, so that we get to know their personalities, their quirks, and their unique voices — both in terms of how they’re written in the story, and how the narrator portrays them. The text and the narration play up Fleurette’s girlish naivete, Norma’s brusque no-nonsense approach to life at large, and Contance’s bravery and wisdom. I loved the character of Sheriff Heath as well, who comes across as a good, honest man dedicated to justice and decency, who’s willing to buck the system in order to see that the innocent are protected. (And I love the fact that it’s Sheriff Heath who gives the sisters their revolvers and makes sure they know how to use them.)

The author makes the historical setting feel real and vibrant, giving us the tastes and smells of factory towns and farms, the sense of busy streets crammed with horse-drawn wagons and sleek automobiles, and the hidden underbelly of society, where the factory workers live in company-owned boarding houses and work in abusive, unhealthy conditions.

The writing here is fast-paced, often funny, and always sharp, catching the nuances of the relationships and the characters, and capturing the colloquialisms and social niceties of the times. Even as the tension and threats mount, there are little moments of humor to keep things moving along.

I really, truly enjoyed listening to Girl Waits With Gun, and I plan to start book #2, Lady Cop Makes Trouble, a bit later this month. I love the Kopp sisters, and can’t wait to see what’s next for them.