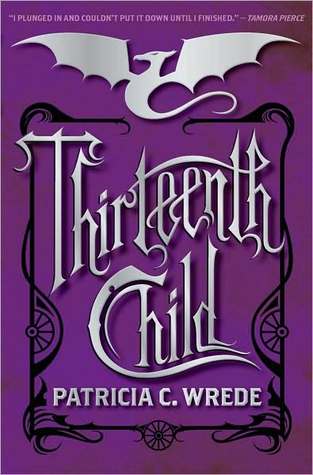 Eff was born a thirteenth child. Her twin brother, Lan, is the seventh son of a seventh son. This means he’s supposed to possess amazing talent — and she’s supposed to bring only bad things to her family and her town. Undeterred, her family moves to the frontier, where her father will be a professor of magic at a school perilously close to the magical divide that separates settlers from the beasts of the wild.

I recently finished reading Thirteenth Child with my son, and while we both enjoyed it, I hesitate to declare this book an unmitigated success.

First, the good: In the world of Thirteenth Child, the American frontier is redefined as a place in which magic is the only thing standing between people and all sorts of deadly beasts. In the country of Columbia, the Mammoth River marks the barrier between civilization and the wild, and as settlers venture west, they rely on magicians to provide the protective spells needed to keep out the wild. The world-building here is quite imaginative — a world in which magic is commonplace, used on a basic level to manage household chores and day-to-day tasks, and on a more complex level, to provide the means of human survival.

Main character Eff is a girl whose powers are just beginning to emerge by the end of this book. Brought up believing herself to harbor some inner evil, thanks to being a thirteenth child, Eff is hesitant and uncomfortable when it comes to using magic, until a gifted teacher introduces her to non-Avrupan (read non-European) approaches to magic. Eff’s worldview is expanded, and she starts to tap into non-traditional approaches to magic, realizing that her talents may be positive after all.

The not-quite-as-good: Thirteenth Child is the first book in the Frontier Magic trilogy, and as such, has to cover a lot of ground in terms of exposition and explanation. Likewise, quite a lot of time is covered, as we follow Eff from age five to age eighteen. Because of the length of time covered in a relatively short book, many of the chapters feel more like summaries than actual events — basically, well, that year, not much happened except Eff’s brother went away to school, or, that year, Eff was sick for a while, missed a lot of classes, and ended up having to repeat a grade.

The author is building a world system from scratch, and at times the jargon threatens to overwhelm the plot. We have Avrupan magic, Hijero-Cathayan magic, and Aphrikan magic, as well as Rationalists, the North Plains Territory Homestead Claim and Settlement Office, and circuit magicians.

The climax of this volume involves a plague of grubs that threaten the western settlements, and Eff’s role in fighting the bug invasion. The solution to the problem comes across like convoluted mumbo-jumbo, not that it’s not exciting to read.

Finally, on the negative side, I’d be remiss in not mentioning the to-do over this book from when it first came out concerning the lack of a Native American population. The only people in the book are the (presumably) white settlers, with a couple of people of color mixed in among the townsfolk and school magicians. There isn’t a native culture, at least not one that’s mentioned at all in this book. Apparently, there was quite a bit of criticism over this when the book came out. As a work of fantasy fiction, I suppose it’s the author’s right to create whatever world she sees fit… but I leave it to potential readers to decide whether or not this is a deal-breaker for them.

Bottom line: My son and I enjoyed Thirteenth Child enough to continue with the series. Despite uneven pacing, the story itself is fresh and intriguing — so that the duller parts are easily outweighed by chapters and sequences that are suspenseful and highly engaging.

4 thoughts on “At A Glance: Thirteenth Child by Patricia C. Wrede”