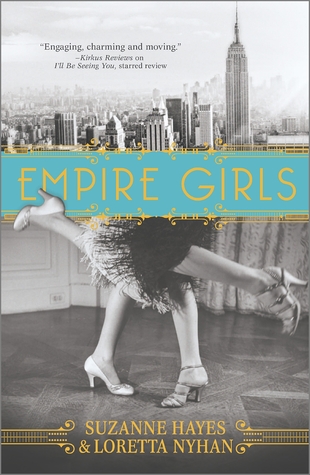 Flapper-era New York is having a moment. The 1920s in Manhattan seems to be the setting of choice for novel after novel right now — not without good reason, of course. What could be more perfect than the glamour, danger, and reckless freedom of the era, with young women living large, gin flowing freely, and a country going a little bit crazy after the trauma of war years?

Fitting in nicely with this trend is the new novel Empire Girls, focusing on two sisters, Rose and Ivy, and their adventures in the big city. Rose and Ivy have been raised by their widower father in a quiet home in upstate New York. Ivy is the free spirit, going off with her father on explorations and adventures, while Rose is the responsible one, tending the house, making sure dinner is served on time, and trying to keep her family together. But when their father dies suddenly, the girls receive shocking news: They have an older brother, last seen in New York City, who will inherit the house — and unless they can find him and get him to deal with the estate’s debts, they’ll be turned out of their home.

With no other options, the girls set out for the city — Ivy excited, Rose in absolute dread — and head for their brother’s last known address, the Empire House, a semi-respectable establishment renting rooms to young ladies under the watchful eye of a not-terribly-friendly landlady. Once there, the girls have to find their way through the temptations and risks of the city. Never close before, the sisters fight and come together, each finding new facets of herself as they navigate gin joints and speakeasies, charming gents and wild girls, while piecing together the clues to track down their elusive brother.

Empire Girls succeeds in painting the New York of the 1920s, capturing the sights, smells, and unbearable heat of summer in the city. The novel vividly describes the allure of freedom for two country girls, and what they must give up in order to thrive. At the same time, it’s not all fun and abandon: In Empire Girls, we also get a taste of the sacrifices made by the men who lived through the Great War, and come face to face with the darker side of the 1920s in the damaged soldiers who are left to rebuild lives for themselves.

Empire Girls is written by two authors, each taking on the voice of one of the sisters, so that Rose and Ivy each get to “speak” for themselves. This mostly works, although the narrative occasionally feels choppy, and it was sometimes difficult to sort out whose voice we were hearing without referring back to the chapter headers.

Stylistic issues aside, I found the plot to be quite enjoyable, nicely layering the mystery of the missing brother on top of the story of two young women finding themselves and rediscovering each other.

Maybe the New York jazz age thing is getting a bit overdone — but here, it really works. As a showcase for Rose and Ivy and their newfound independence, the Manhattan of the 1920s is a great vehicle for illustrating the changing opportunities available to young women, the wild freedom embraced by people who’ve lived through the awful war years, and the prospect of a future without rigid rules and societal expectations.

And even more importantly, Empire Girls is just plain fun. I enjoyed the characters, the setting, and the plot. It’s a quick book, light but with real emotion, and a great choice for a summer read.