A little note for 2019: For the next short while, I think I’ll focus specifically on books I’ve picked up at our library’s fabulous annual sales. With all books $3 or less, it’s so hard to resist! And yet, they pile up, year after year, so it’s a good idea to remind myself that these books are living on my shelves. 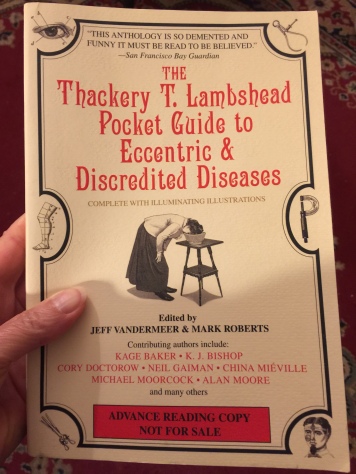 “Imagine if Monty Python wrote the Mayo Clinic Family Health Book, and you sort of get the idea. Afraid you’re afflicted with an unknown malady? Finally you have a place to turn!” —Book Sense

You hold in your hands the most complete and official guide to imaginary ailments ever assembled—each disease carefully documented by the most stellar collection of speculative fiction writers ever to play doctor. Detailed within for your reading and diagnostic pleasure are the frightening, ridiculous, and downright absurdly hilarious symptoms, histories, and possible cures to all the ills human flesh isn’t heir to, including Ballistic Organ Disease, Delusions of Universal Grandeur, and Reverse Pinocchio Syndrome.

Lavishly illustrated with cunning examples of everything that can’t go wrong with you, the Lambshead Guide provides a healthy dose of good humor and relief for hypochondriacs, pessimists, and lovers of imaginative fiction everywhere. Even if you don’t have Pentzler’s Lubriciousness or Tian Shan-Gobi Assimilation, the cure for whatever seriousness may ail you is in this remarkable collection.

This looks so incredibly silly and inspired. And look, somehow or another I ended up with a signed copy! Thank you, public library sale’s $1 table! 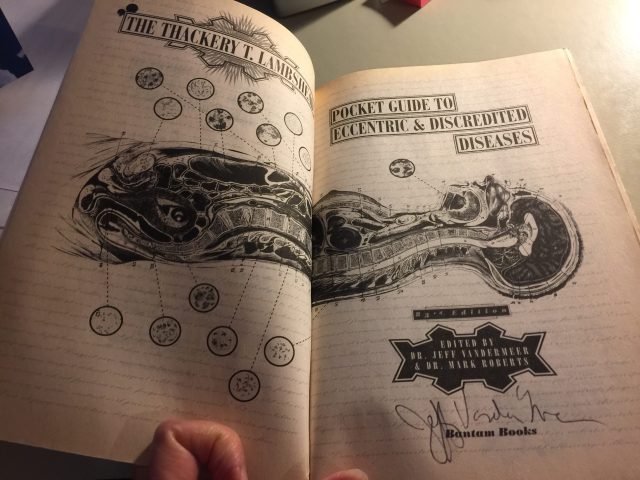 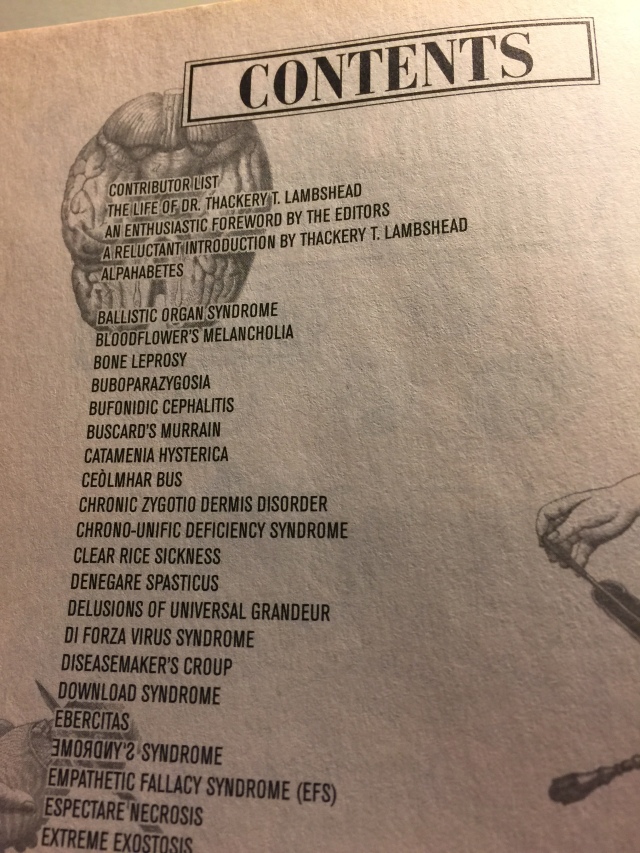 Huh. I just now realized that I’ve been committing hyper-punctuation in regard to this book, whose title does in fact include a comma and an apostrophe, but not a question mark — which I have egregiously added in several tweets and emails. Mea culpa.

Be that as it may, I have to say that I just adored Where’d You Go, Bernadette. (See? No question mark). Author Maria Semple has crafted a social satire that is uproariously funny, hits on a ton of memes and flashpoints of today’s hyper-plugged in society, and yet is also quite touching and surprisingly sweet in places.

Given the title, it’s not a spoiler to say that the plot revolves around events leading up to the disappearance of 50-year-old Bernadette Fox, once a brilliant rising star in the world of architecture, now an eccentric, possibly agoraphobic mother and housewife, whose life is one long string of odd behaviors. Bernadette, her 15-year-old super-talented daughter Bee, and her workaholic Microsoft exec husband Elgin, live in a run-down former reform school for girls atop a Seattle hill. The house is falling apart at the seams, literally, as blackberry vines force their way up through the foundations and the damp ceilings and walls crumble around them. (Keep an eye on those blackberry vines — they’re key to some early developments that lead to a disaster at once appalling and hilarious.)

Bee attends the Galer Street School, described in its mission statement as “a place where compassion, academics, and global connectitude join together to create civic-minded citizens of a sustainable and diverse planet.” Children are graded on a scale of “Surpasses Excellence”, “Achieves Excellence”, and “Working Toward Excellence”. Bernadette is happy that her daughter is thriving, but hates everything about Seattle, including the meddling, fussy, over-involved parents of the school, whom she refers to as gnats. Things go from bad to worse when Bernadette’s neighbor Audrey hosts a prospective parents brunch at her home in an attempt to lure “Mercedes Parents” to their Suburu-level school. To say that Bernadette and Audrey don’t quite get along would be the understatement of the year.

Further complications: Bernadette has hired a virtual assistant named Manjula to handle all of her personal business by internet — everything from travel plans to prescriptions to ordering clothing and household repairs. Before you can say “identity theft”, Bernadette has provided Manjula with her entire family’s bank account numbers, birthdates, passport numbers, and social security numbers.

When Bee comes home one day with a report card full of S grades and a brochure for a trip to Antarctica, events and disasters begin to snowball. Neither parent says no, plans for this exotic trip are set in motion, and Bernadette soon begins to fear that she’s in way over her head. By the time the date of the trip rolls around, psychiatrists, FBI agents, Microsoft admins, school chums, and gardeners have all played a role in the unfolding crisis… and Bernadette disappears without a trace.

Precocious, talented, determined Bee is left behind to put the pieces together, and what we’ve been reading all along is Bee’s compilation of documents pertaining to these events. Where’d You Go, Bernadette is told via emails, faxes, school reports, letters, magazine articles, and captain’s logs; Bee has assembled everything she can that may shed light on her mother’s disappearance, and through quick thinking and connecting of dots, believes she may have found pieces of the puzzle that will lead to answers about her mother.

Let me just say that I enjoyed this book immensely. The writing is crisp and deft, and the author does an outstanding job of capturing some of the nuttiness that is so deeply ingrained in today’s world of helicopter parenting, the cult of self-esteem, the worship of tech, and the increasing isolation experienced by individuals in a world of constant “connectitude”. One character writes impassioned screeds about her Victims Against Victimhood support group, whose members TORCH one another (Time Out! Reality Check) when they speak in victim-lingo; Bernadette’s husband Elgie is revered because he gave the 4th-most watched TEDTalk ever; the school hosts a constant series of concerts and events featuring multiculturalism so extreme that it’s practically a religious devotion. This all rings true in a way that is both slightly sad and hilariously funny.

And yet, there is an underlying sweetness in much of this story as well. As the book unfolds, some of the most self-deluded characters find ways to acknowledge hard truths. The bad guys aren’t necessarily all that bad after all. What seems charming and eccentric is revealed to be a cover for deeper problems that must be addressed. The perfect schools may not be what all children need. Little by little, the beliefs held by the characters at the start of the book fall away, until just about all find their way toward something closer to honesty and decency.

My only quibble about Where’d You Go, Bernadette has to do with the last section of the book, which is told mostly through Bee’s narration and loses some of the oddball charm built into the stream of constant emails and faxes. At times, this section reads a bit too much like a travelogue and loses a bit of the punch provided throughout so much of the book. Still, this is a minor complaint; the book wraps up in a way that’s completely satisfying yet still surprising, and I walked away a) smiling and b) resolved to read whatever Maria Semple decides to write next.

If you enjoy quirky fiction with a bite, this is a book for you.