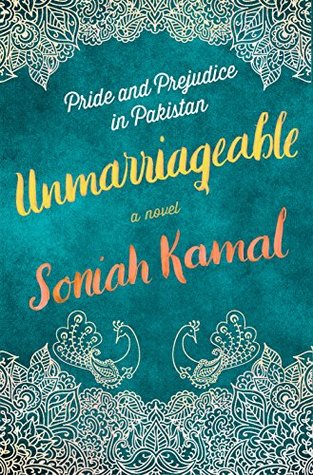 In this one-of-a-kind retelling of Pride and Prejudice set in modern-day Pakistan, Alys Binat has sworn never to marry—until an encounter with one Mr. Darsee at a wedding makes her reconsider.

A scandal and vicious rumor concerning the Binat family have destroyed their fortune and prospects for desirable marriages, but Alys, the second and most practical of the five Binat daughters, has found happiness teaching English literature to schoolgirls. Knowing that many of her students won’t make it to graduation before dropping out to marry and have children, Alys teaches them about Jane Austen and her other literary heroes and hopes to inspire the girls to dream of more.

When an invitation arrives to the biggest wedding their small town has seen in years, Mrs. Binat, certain that their luck is about to change, excitedly sets to work preparing her daughters to fish for rich, eligible bachelors. On the first night of the festivities, Alys’s lovely older sister, Jena, catches the eye of Fahad “Bungles” Bingla, the wildly successful—and single—entrepreneur. But Bungles’s friend Valentine Darsee is clearly unimpressed by the Binat family. Alys accidentally overhears his unflattering assessment of her and quickly dismisses him and his snobbish ways. As the days of lavish wedding parties unfold, the Binats wait breathlessly to see if Jena will land a proposal—and Alys begins to realize that Darsee’s brusque manner may be hiding a very different man from the one she saw at first glance.

Told with wry wit and colorful prose, Unmarriageable is a charming update on Jane Austen’s beloved novel and an exhilarating exploration of love, marriage, class, and sisterhood.

Pride and Prejudice retellings come in so many flavors and varieties — but Unmarriageable by Soniah Kamal makes it all feel new and fresh again by setting the familiar story in her native Pakistan in the early 2000s.

It is a truth universally acknowledged that a girl can go from pauper to princess or princess to pauper in the mere seconds it takes for her to accept a proposal.

So begins this enchanting story. You know the basics, of course. A formerly prosperous family, rather down on their luck, has five daughters in need of husbands. Their small-town life gets a dose of excitement when a new, very eligible, very wealthy young man arrives on the scene and instantly attracts attention from all the mothers dying to make good matches for their daughters.

In Unmarriageable, the Binat family lives in the less-than-exciting town of Dilipabad. Having been cheated out of the family fortune, they’ve adapted to their reduced circumstances, and meanwhile mother Pinkie obsesses over the futures of her single daughters, exhorting them to make sure to “grab it” whenever they have a chance to meet a wealthy man. The oldest two sisters, Jena and Alysba (Alys) teach English at a private school for girls. In their early 30s, the sisters are practically over the hill, but Pinkie has not given up on them just yet. When the family is invited to the big society event — the NadirFiede wedding — it’s another opportunity to find eligible men for the girls to make “you-you eyes” at.

Alys, our main character, is smart and independent, not willing to accede to her mother’s insistence on marriage as the be-all and end-all of a woman’s purpose. She loves her family and her friends, loves to read and think, and is not about to pursue a man or agree to a match because it’s expected or provides access to a fortune. At the wedding, she and Jena meet Bungles, a lovely young man who’s instantly smitten with Jena, but his friend Darsee is rude and stand-offish, and Alys takes an immediate loathing to him.

We all know where the story goes, right? Unmarriageable hits all the major marks of the Pride and Prejudice story, but the Pakistani setting keeps it fun and different. Some retellings just don’t work within a 21st century timeframe, because the emphasis on social standing and marrying for money doesn’t necessarily translate well in a way that makes sense. Here, though, we’re led to understand that among the upper class society circles (and those longing for acceptance into those circles), the pursuit of successful marriages is everything. It’s really entertaining to see the traditional butting up against the modern, whether through the descriptions of the clothing, the marriage rituals, or the expectations for women to fulfill their prescribed roles in respectable society.

I loved the introduction to Pakistani culture — the foods, music, clothing, literature, and unique ways that the English and Pakistani languages are interwoven. The use of close-but-not-exact names to mirror Austen’s characters is really clever too.

My only minor quibble is that it doesn’t quite work for me to have an Austen retelling in which the characters read Jane Austen! In many of the modern-day retellings I’ve read, it’s never acknowledged that the original stories even exist. But here, in Unmarriageable, Alys teachers Pride and Prejudice in her English classes, and returns again and again to thinking about Austen’s themes. So given that, how does she understand her own life and the people in it — sisters Jena, Mari, Qitty, and Lady; her suitor Kaleen; Darsee and his sister Jujeena; and the dastardly Mr. Jeorgeullah Wickaam? Wouldn’t you think she’d end up in some sort of existential crisis, wondering if she really exists or if she’s just a character in a book?

That silliness aside, I do love the writing in this story, which captures some of the archness and intelligence we’d expect in a P&P retelling:

The story doesn’t dwell on serious matters for too long, but there are little moments that let us know that the lives of women are particularly fraught at that time, and that the issues facing women go well beyond securing a rich husband:

She grabbed the newspaper no one had opened yet and flipped through the usual news of honor killings, dowry burnings, rapes, blasphemy accusations, sectarian violence, corruption scandals, tax evasions, and the never-ending promises by vote-grubbing politician to fix the country.

But overall, there’s plenty of lightness and joy to go around:

And finally, something that I know will ring true for all the booklovers out there:

It was a truth universally acknowledged, Alys suddenly thought with a smile, that people enter our lives in order to recommend reads.

It’s my pleasure to recommend Unmarriageable! If you love Austen and are ready for a new take on a well-loved story, definitely check this one out!