From their faithful camper van to boats, kayaks, bicycles, and motorbikes, join stars of Outlander Sam and Graham on a road trip with a difference, as two Scotsmen explore a land of raw beauty, poetry, feuding, music, history, and warfare.

Unlikely friends Sam and Graham begin their journey in the heart of Scotland at Glencoe and travel from there all the way to Inverness and Culloden battlefield, where along the way they experience adventure and a cast of highland characters. In this story of friendship, finding themselves, and whisky, they discover the complexity, rich history and culture of their native country.

Take two actors, put them in a rickety camper van, and turn them loose in the Scottish Highlands. What do you get? Clanlands, the new book by Outlander stars Sam Heughan and Graham McTavish — part road trip memoir, part bromance, part history lesson, and all good fun.

Sam and Graham met thanks to their work on Outlander, and in Clanlands, they set out together to explore their native land, traveling from site to site in search of deeper meaning and connection, with the occasional adventure and crazy stunt thrown in along the way.

Reading or listening to Clanlands, we learn about the history and role of the clans in Scotland, the various wars and rebellions, and how Scotland’s history is still very much a part of the land and its people today.

We’re also treated to Sam and Graham’s ongoing banter, in which they complain, ridicule, and criticize one another (while making it clear how very much they actually do value each other’s friendship.) It’s pretty adorable.

There are also stories shared about the filming of Outlander and how the show has changed their lives, as well as stories from their earlier acting days and the various roles and opportunities that led them to where they are today.

Plus, Sam seems to delight in making Graham as uncomfortable as possible at all times, so besides hair-raising near-misses while driving, there’s also kayaking, bicycling, climbing rocks and rocking boats, a motorcycle sidecar ride that nearly ends in disaster, and so much more.

I’d originally picked up a hard copy of the book, then had to get the audiobook once I realized it was narrated by Sam and Graham. I highly recommend going the audio route! The two narrators put so much of their personalities into their narration, and listening, we’re treated to their bickering and comedic moments in a way that the printed page doesn’t capture nearly as well.

Outlander author Diana Gabaldon wrote the book’s forward, and she reads this on the Clanlands audiobook, so yet another treat for fans.

The book includes pages of terrific photos, as well as maps and various lists and glossaries, but fortunately, these are also available with the audiobook as a downloadable PDF.

I think Clanlands is especially a treat for Outlander lovers — you really do need to know who the two authors are and have a sense of what they’re like to appreciate their chemistry and how funny they are together. Still, there’s a lot of truly interesting information included about Scottish culture, history, and locations, so a non-fan could enjoy much of the book too.

The road trip that Sam and Graham describe in Clanlands was taken while filming the upcoming Starz series Men in Kilts, which I personally cannot wait to see.

If you’re looking for a holiday gift for the rabid Outlander fan in your life who already has ALL of the Outlander books and assorted memorabilia, consider getting them Clanlands. They’ll love you for it.

And if you yourself are an Outlander fan, particularly a fan of the TV series, then treat yourself to the audiobook. For me, it’s been a laugh-inducing, silly, informative, and overall delightful way to spend 10 hours!

It’s really not that bad…

I’m getting on a plane today, flying home from East Coast to West — so what did I read yesterday? Why, just three different short stories about air travel. And why did I choose to do that on the day before a flight? No idea, really… because they were there?

In any case, they didn’t all freak me out. They’re not all scary, but still — an odd choice, given the timing.

Here’s what I read: 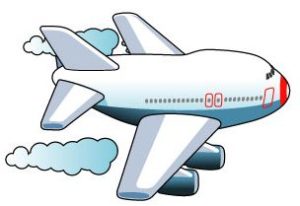 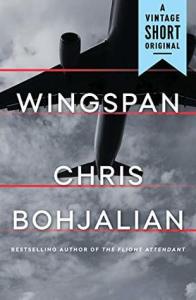 Wingspan by Chris Bohjalian: This is a one-act play by an author who’s always terrific. The action centers on two flight attendants, one young and inexperienced, one closer to middle age and with enough years of flying and life to be both practical and somewhat jaded. As they prepare for takeoff, the younger woman’s fear of flying is obvious, and as they talk, she begins to reveal her long-held secrets that led her to this point. The dialogue is sharp and clever, showing the slow development of trust and support between the two characters. Wingspan is not frightening from a flying perspective, but it is disturbing in terms of what is revealed and what the younger woman has experienced. This is a great short read (32 pages), available as an e-book standlone. Definitely recommended.

Next, two shorts by the amazing Seanan McGuire, both originally Patreon stories:

Carry On: Published on Patreon in 2016, available to read online at Nightmare Magazine (https://www.nightmare-magazine.com/fiction/carry-on/):

A creepy tale that’s not too implausible. Airlines charge for legroom, carry-on bags, food, earlier boarding, the privilege of choosing seats… what’s next? Carry On takes that question to an answer that’s not all that far-fetched. Instead of making larger people buy two seats while having skinnier folks get to sit in comfort by virtue of their smaller size, why not charge by total weight? You buy a ticket based on the combined weight of you and your carry-ons — and you’d better hope you pass the pre-flight weigh-in!

Wow, this is one creepy story! It’s not terrifying from the flying perspective — nothing bad happens to the engines or the rest of the plane. But what happens when you’re in the air on a routine flight and learn that the rest of the world has maybe just been wiped out? This story is horrifying and disturbing in all the best ways.

So, really, nothing to put me off flying too badly, and all great reads!

And hey, at least I didn’t dive into this collection, which keeps showing up in my recommendations list:

A collection of 17 horror stories about… yes… flying, edited by Stephen King, with this tasty hint in the description:

All the ways your trip into the friendly skies can turn into a nightmare, including some we’ll bet you’ve never thought of before… but now you will the next time you walk down the jetway and place your fate in the hands of a total stranger.

I actually wouldn’t mind reading this — but not today, thanks! 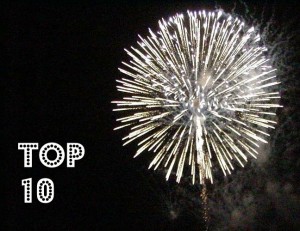 This week’s theme is Top Ten Books Featuring Travel In Some Way (road trips, airplanes, travelogues, anything where there is traveling in the book) . Great topic for kicking off all that summer reading we’re just dying to get to… and for getting in the mood for summer vacation!

I may be stretching a bit for some of these, but here are the top ten books I’ve read that involve planes, trains, automobiles… ships, horses, spaceships… So long as it’s a form of transportation, it counts! (Note: I’m providing links to the books on this list which I’ve reviewed here at Bookshelf Fantasies. Click if you want to find out more!)

1) Voyager by Diana Gabaldon. Book three in the amazing Outlander series features a whole boatload of travel, literally, as our heroes make a perilous Atlantic crossing, back in the days before luxury cruise ships. 18th century sea voyages were not pretty, people.

3) Beauty Queens by Libba Bray. Think of a cross between Drop Dead Gorgeous and Survivor, and you get an idea of the weird zaniness that is Beauty Queens, an amazingly funny young adult novel about a group of teen beauty contestants stranded on a deserted island after a plane crash.

5) The Revised Fundamentals of Caregiving by Jonathan Evison. This affecting, sad-with-a-touch-of-humor tale of a caregiver and his young charge includes an ill-advised road trip through the American West, with stops at bizarre roadside attractions such as the world’s biggest pit. (review)

6) Snow Mountain Passage by James D. Houston. Talk about a terrible journey. You really can’t get much worse than the horse and wagon caravan crossing the Sierra Nevadas in the middle of winter. Yes, this book is about the Donner party — but quite a bit of it is about the caravan’s ill-fated early stages as the wagons cross mile after mile of wilderness in hopes of making it to the golden land of California before first snow.

7) Wild: From Lost to Found on the Pacific Crest Trail by Cheryl Strayed. My only non-fiction title on this week’s list, Wild is a travelogue within a memoir — or is a memoir within a travelogue? Take one terribly unprepared hiker, put her on a months-long journey by foot from Southern California to the Washington/Oregon border, and you get a riveting tale of travel and self-discovery. And lots of drama about the condition of the author’s feet. (review)

8) NOS4A2 by Joe Hill. Maybe not an obvious choice for a list about travel, but this super-creepy horror novel revolves around several key vehicles: a Rolls Royce Wraith,  a Triumph motorcycle, and a Raleigh Tuff Burner bicycle. Hell on wheels, indeed. (review)

9) Mrs. Queen Takes the Train by William Kuhn. Main character Elizabeth (as in, her royal highness the Queen of England), bored one day, decides to get on a public train and go visit her decommissioned yacht. Mrs. Queen quite enjoys her train voyage, rubbing elbows with her unsuspecting subjects and visiting the snack car. Quite a remarkable outing, all in all. (review)

10) I did say something about spaceships, didn’t I? For my #10 entry, it’s a toss-up between several sci-fi books that feature long and important journeys by spaceship to far-off worlds. Hey, it’s a kind of travel!  My favorite space travel books are:

Because I never seem to be able to stop at just ten, I’ll include a few other books that popped out at me before I could hit “publish”.

Okay, stopping now. What did I miss? What are your favorite books featuring travel? In looking back at my list, I see an awful lot of awful travel experiences. I hope you came up with a cheerier batch of books than I did!

If you enjoyed this post, please consider following Bookshelf Fantasies. Thanks for stopping by!