The Old Man’s War series has occupied a place of honor on my TBR list for years now… I almost feel like I’m breaking with tradition by actually reading these books, rather than featuring them in yet another January post about my reading resolutions for the year.

Ever since discovering John Scalzi’s amazing books, I’ve know that I needed to make time for this series, but after talking about it for so long, it started feeling like a huge undertaking — and I’m not quite sure why. Now that I’ve dived in (and read three books in the space of a week), I can tell you that this series contains all the trademark Scalzi wit and smart-assery (is that a word? it should be a word) that we know and love from books like The Android’s Dream, Redshirts, and Lock In. I was afraid that Old Man’s War would be all hard sci-fi, serious and full of space battles, and I’m happy to say that that’s not the case. I mean, yes, there are space battles and the eradication of planets and species… but these books are funny, dammit, even while containing moments of deep emotion and moral dilemmas. 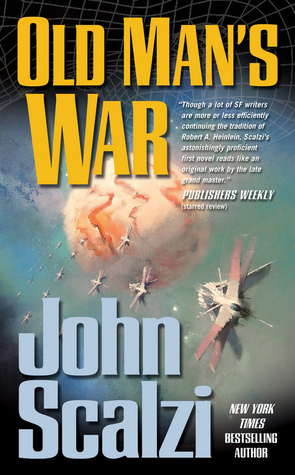 The series kicks off with Old Man’s War, which sets up quite a neat bit of world-building. From the opening lines, we know we’re in for a treat:

I did two things on my seventy-fifth birthday. I visited by wife’s grave. Then I joined the army.

John Perry is the main character — a nice, decent man who misses his late wife, and has nothing much tying him to life on Earth. So, John enlists in the Colonial Defense Forces, a space-based military whose purpose is to protect human colonists across the depths of space, as they fight other species for possession of habitable planets. Why would a 75-year-old enlist? Because the CDF only accepts senior citizen recruits, enticing them with the prospect of technology that can make them young again. Sure, there are a few catches, like never being able to return to Earth again, and — oh yeah — going out and killing aliens in battle after battle, but the elderly recruits are all eager for a new chapter in their lives, so off they go.

What follows is an intriguing story of warfare, military training, the bonds between squad-mates, unimaginable danger from unimaginable aliens, and a rip-roaring good adventure. The morality is decidedly grey, and John Perry becomes more and more aware of the fallibility of the CDF powers-that-be. Danger, adrenaline, and even love come into play. It’s an awesome start to the series, although Old Man’s War can certainly stand on its own as a single-volume story, for those not looking to make a long-term investment in a series. 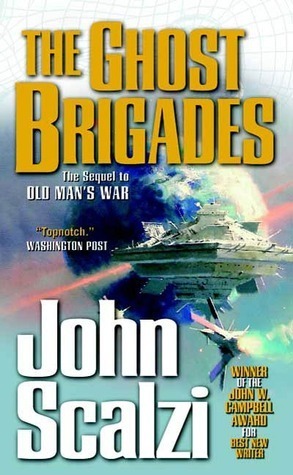 The question of free will and consciousness is front and center. What does it mean to be a person? Are you still a person if your consciousness has been manufactured? Can a non-self-aware species become self-aware through technology? And if so, should they?

The adventure here feels much more personal, as it focuses on a few key people and their struggle to do the right thing, even when the right thing isn’t always obvious. The technology in this book expands on what we know from Old Man’s War, and is quite fascinating.

I did feel that the first third or so of the book was rather slow-moving, as it throws us into a new situation amidst new people and species, and spends a lot of time laying out the framework of the current conflict. I missed John Perry quite a bit (he’s absent from this story), although by the later sections of the story, I found myself just as invested in the new characters’ lives.

Things definitely pick up by the end — I couldn’t put this book down, and had to immediately move on to the next book to see what happened next… 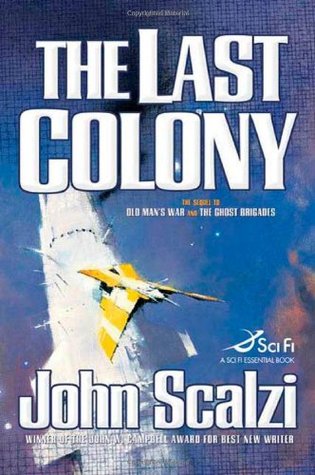 Which brings us to The Last Colony, the third book in the series. As you might guess from the title (and as is clear from reading the author’s acknowledgements), The Last Colony was meant to be the end of the story. And a great end it is! Although apparently enough people loved these books for the author to continue the story for three more books, but I haven’t gotten there yet!

In The Last Colony, we’re reunited with John Perry, who’s once again at the center of a galactic battle for domination between the CDF and the non-human species who have allied together to put a limit to non-authorized planetary colonization. John is sent to head up a new colony on a new planet (which the CDF names Roanoke, not that that’s ominous or anything).  But the aliens aren’t particularly happy with this bold move by the humans, and they’re willing to do something about it.

I won’t give away too much about what actually takes place. It’s quite a good story, full of military maneuvering, intelligence gathering, high technology… and also domestic drama, snarky colonists, and plenty of awesome wordplay and quippy, snippy arguments. I was completely engrossed by this book… and now that I’ve finished, I’m trying to force myself to hit pause and read something different before diving into the 2nd half of the series.

Yes, there are three more books in the Old Man’s War series, and at this point, I can safely say that I’ll be reading them all… probably very, very soon. 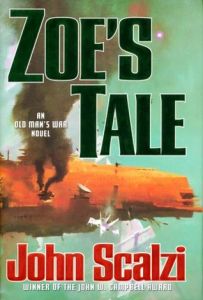 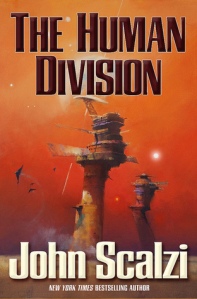 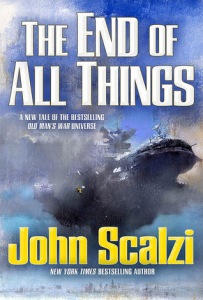