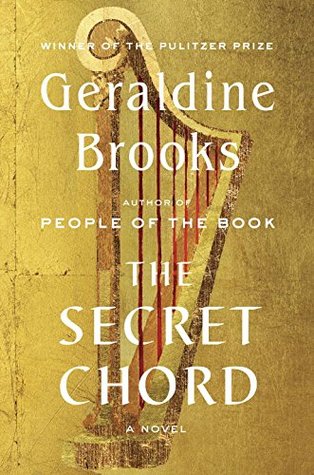 Peeling away the myth to bring the Old Testament’s King David to life in Second Iron Age Israel, Brooks traces the arc of his journey from obscurity to fame, from shepherd to soldier, from hero to traitor, from beloved king to murderous despot and into his remorseful and diminished dotage.

The Secret Chord provides new context for some of the best-known episodes of David’s life while also focusing on others, even more remarkable and emotionally intense, that have been neglected.  We see David through the eyes of those who love him or fear him—from the prophet Natan, voice of his conscience, to his wives Mikhal, Avigail, and Batsheva, and finally to Solomon, the late-born son who redeems his Lear-like old age. Brooks has an uncanny ability to hear and transform characters from history, and this beautifully written, unvarnished saga of faith, desire, family, ambition, betrayal, and power will enthrall her many fans.

Sadly, The Secret Chord wasn’t nearly as engaging as it should have been.

Geraldine Brooks is an amazing writer, but good writing alone isn’t enough to elevate this book to a must-read. I think part of the problem is the perspective. The story of King David should be exciting and dramatic — but in The Secret Chord, we only rarely see first-hand drama. The book is narrated in the first-person voice of the prophet Natan, and a great deal of his narration consists of him relaying stories told to him by others. So, rather than seeing David’s early victories or the intrigues, we often get other characters telling Natan about these events. I always felt that I was seeing the story from a distance, rather than becoming immersed in it.

Additionally, the chronology of the novel is full of jumps and out of sequence bits and pieces. We start with David as an aging king, then jump back in time as we hear stories about his youth and Natan’s, then come back to the original time period, then angle off into stories of David’s earlier relationships, then pick back up again and move forward. It’s muddled — and I felt that the mixed-up timeline was yet another factor, on top of the distanced storytelling voice, that kept me from ever feeling that I truly got a picture of David, which is the entire point of the book.

As a side issue, I was frustrated while reading by a presumption of knowledge of places and names. The author chooses to use the Hebrew versions of the more commonly Anglicized Biblical names, so that Solomon is Shlomo, Saul is Shaul, the tribe of Benjamin is referred to as the Binyaminites, etc. This wasn’t a huge problem for me, but on top of this, the places are not easily connected with their modern day equivalents, so only someone familiar with Biblical geography would know that Yebus is the ancient version of modern-day Jerusalem, where Moab and Mitzrayim are, or be able to connect other unusual place-names with their 21st century locations.

[Note: I received an ARC of this book via a Goodreads giveaway. I just now looked up the book on Amazon, and I see that the finished book includes a glossary of characters and maps of ancient Israel — these would have been incredibly helpful to have while I was reading the book.]

Such a pity, overall. The story should be fascinating, and in truth, there are some moments of beauty and of horror that make for compelling reading. Unfortunately, though, there just aren’t enough of these.

I’m a huge fan of three of Geraldine Brooks’s books: Year of Wonders, March, and People of the Book. The Secret Chord isn’t boring, but it also doesn’t rise to the high level I’d expected.

As for the subject, King David, nothing will ever replace my fondness for the late Joseph Heller’s marvelous God Knows.

3 thoughts on “Take A Peek Book Review: The Secret Chord by Geraldine Brooks”