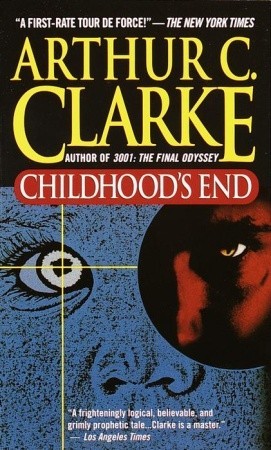 The Overlords appeared suddenly over every city–intellectually, technologically, and militarily superior to humankind. Benevolent, they made few demands: unify earth, eliminate poverty, and end war. With little rebellion, humankind agreed, and a golden age began.

But at what cost? With the advent of peace, man ceases to strive for creative greatness, and a malaise settles over the human race. To those who resist, it becomes evident that the Overlords have an agenda of their own. As civilization approaches the crossroads, will the Overlords spell the end for humankind… or the beginning?

I’m so glad to have read this sci-fi classic! I recently watched the incredibly well-done TV version of Childhood’s End (a three-part mini-series on Syfy), and couldn’t wait to read the original novel for more insights and explanations.

Where to start? The book differs from the TV show in many ways, but the overall storyline remains more or less the same. In some ways, the book has fewer big, dramatic set-pieces, and we get less involved with certain characters or places. The book is a story of all of Earth and the fate of mankind. It’s fascinating to see the evolving relationship between the humans and Overlords, and what this relationship will mean for the next chapter of life on Earth.

The writing is intelligent and though-provoking. We see the events unfold through many different characters’ perspectives, and come to understand the role of the Overlords as well as the way Earth’s inhabitants grow over the years from fear to acceptance, curiosity to complaisance.

The moment of the Overlords’ arrival, as seen by an astrophysicist, is an early indication this book is really something special:

He felt no regrets as the work of a lifetime was swept away. He had labored to take man to the stars, and, in the moment of success, the stars — the aloof, indifferent stars — had come to him. This was the moment when history held its breath, and the present sheared asunder from the past as an iceberg splits from its frozen, parent cliffs, and goes sailing out to sea in lonely pride. All that the past ages had achieved was as nothing now: only one thought echoed and re-echoed through Reinhold’s brain:

The human race was no longer alone.

If you’re interested in classic science fiction, this is a great place to start. While it was written in 1953, Childhood’s End really does not feel dated. As an aside, at least one small moment where a character expressed dissatisfaction with what passes for the arts in this golden age seems quite prescient:

Do you realize that every day something like five hundred hours of radio and TV pour out over the various channels? If you went without sleep and did nothing else, you could follow less than a twentieth of the entertainment that’s available at the turn of a switch! No wonder that people are becoming passive sponges — absorbing but never creating. Did you know that the average viewing time per person is now three hours a day? Soon people won’t be living their own lives any more. It will be a full-time job keeping up with the various family serials on TV!

Childhood’s End is fascinating, beautifully written, and with so much food for thought and discussion. Highly recommended!