Bookshelf Fantasies is participating in the blog tour for the release of Second Life, author S. J. Watson’s second novel following the huge hit Before I Go To Sleep. 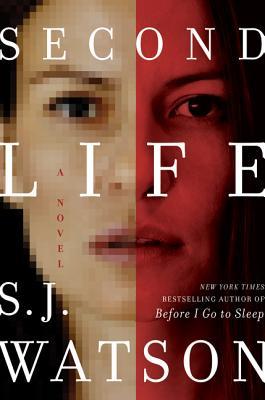 From the New York Times bestselling author of Before I Go to Sleep, a sensational new psychological thriller about a woman with a secret identity that threatens to destroy her.

How well can you really know another person? How far would you go to find the truth about someone you love?

When Julia learns that her sister has been violently murdered, she must uncover why. But Julia’s quest quickly evolves into an alluring exploration of own darkest sensual desires. Becoming involved with a dangerous stranger online, she’s losing herself . . . losing control . . . perhaps losing everything. Her search for answers will jeopardize her marriage, her family, and her life.

A tense and unrelenting novel that explores the secret lives people lead; and the dark places in which they can find themselves, Second Life is a masterwork of suspense from the acclaimed S. J. Watson.

In Second Life, Julia is a part-time professional photographer married to a successful surgeon named Hugh. Julia and Hugh have adopted the baby son born to her sister Kate, now grown into a teenage boy, Connor. Life is good — until Julia gets the horrifying news that Kate has been murdered, apparently the victim of a random mugging.

Distraught and wracked with guilt, Julia decides that there’s more to the story. She begins to dig into her sister’s life, uncovering bits and pieces of a world that her estranged sister never shared with her. Kate lived a free and easy life in Paris, and was an active participant in the “hook-up” lifestyle, meeting men online for cyber and real-world sexual encounters.

Julia decides that Kate’s hidden life must hold a clue to her murder, and begins to explore. But at some point, the exploration stops being about Kate, as Julia gets sucked into an online flirtation with a stranger that turns sexual, and before long, Julia is consumed by the affair she’s stumbled into.

We know early on that Julia has a history of addiction, involving both alcohol and heroin, and the temptation of a drink is ever-present in Julia’s mind as she deals with her guilt and grief over Kate’s death. It’s easy to see that she’s channeled her out-of-control emotions into yet another addiction, her obsession with the online world — and the seemingly perfect and sexy man she meets there.

Second Life spends a great deal of time detailing Julia’s headlong rush into an affair, and unfortunately, the emphasis on the seedy details of Julia’s seemingly willful endangerment of her marriage and family takes center stage for far too much of the book. For large sections, the mystery of Kate’s death is almost an afterthought. Julia throws herself completely into the affair, and the book bogs down in the sexual encounters and hotel trysts.

After a somewhat slow start, the book picks up momentum by about the halfway mark, as Julia starts to realize that her perfect lover is hiding all sorts of secrets from her, and as her affair starts to overshadow everything else in her life that she values. Eventually the pace quickens and the plot becomes more intriguing, as the dangers closing in on Julia become connected back to Kate, as well as to Julia’s hidden young adult past.

I hate to say it, but Second Life overall didn’t really work for me. The main plotline was highly unappealing, with its voyeuristic emphasis on the details of Julia’s infidelity. I understand that Julia was acting out her grief and loss, giving in to her addictive tendencies and flirting with danger to numb herself in some way from the pain of losing her sister. But I just couldn’t sympathize, and felt that her horrendous choices were so clearly illogical and bad for her family (including the son she claims to love so much) that the plot teetered on the edge of becoming completely implausible.

As my own personal bias, I think it’s only fair to add that a book about infidelity had better have a lot of other compelling elements going for it if it’s going to appeal to me in any way. Otherwise, it’s a turn-off — and that was the case for me with Second Life.

I did find myself hooked for the last 100 pages or so… until the abrupt and unsatisfying ending. I won’t say more about it, but the answers to the mystery were fairly prediction, and what’s more, the final scene was a lousy payoff for the tense build-up.

I really enjoyed Before I Go To Sleep and ended up recommending it to lots and lots of reader friends. Sadly, Second Life does not live up to the promise of the earlier book.

I usually try to find a reason to recommend or praise a book if I’m participating in a blog tour. While Second Life didn’t work for me, I could imagine that readers who are into thrillers and aren’t bothered by the subject matter the way I was might enjoy this book. If you read it and have a different opinion, please share your thoughts!

S. J. Watson was born in the Midlands and lives in London. His first novel was the award-winning Before I Go to Sleep, which has sold over four million copies in more than forty languages around the world. It was recently adapted into a major motion picture starring Nicole Kidman, Colin Firth, and Mark Strong.