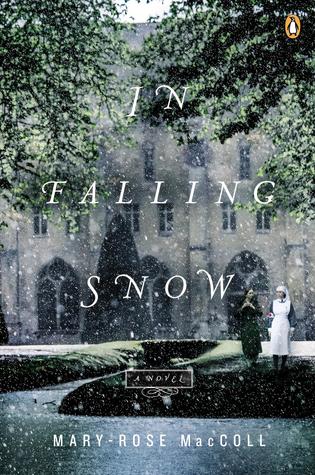 Iris Crane’s tranquil life is shattered when a letter summons memories from her bittersweet past: her first love, her best friend, and the tragedy that changed everything. Iris, a young Australian nurse, travels to France during World War I to bring home her fifteen-year-old brother, who ran away to enlist. But in Paris she meets the charismatic Dr. Frances Ivens, who convinces Iris to help establish a field hospital in the old abbey at Royaumont, staffed entirely by women—a decision that will change her life. Seamlessly interwoven is the story of Grace, Iris’s granddaughter in 1970s Australia. Together their narratives paint a portrait of the changing role of women in medicine and the powerful legacy of love.

In Falling Snow was my book club’s pick for March, and chances are it would never have crossed my radar otherwise. Written by an Australian author, In Falling Snow creates a fictional portrait of life at Royaumont, a real-life field hospital run by a completely female staff during World War I. I found the historical elements of this book the most compelling, witnessing the amazing bravery of the women doctors, nurses, orderlies, and drivers who refused to be pushed aside or belittled, who didn’t accept that women weren’t skilled or tough enough to perform surgery and treat wounded soldiers. The fact that this hospital really existed as described is so inspiring, and I was thrilled to read the author’s afterword with citations of her non-fiction sources.

The fictional characters and the structure of the novel are only middling successful, in my opinion. The storyline shifts between Iris as an old woman and her granddaughter Grace, an Australian obstetrician, and Iris’s memories of her war-time experiences at Royaumont. We’re meant to focus on Iris’s friendship with a fellow hospital staffer named Violet; Iris abruptly cut ties with all of her friends from that time immediately after the war, and it’s around Violet that her thoughts circle, but I didn’t feel the chapters on life at the hospital ever really convinced me that their friendship was so exceptionally special.

Iris is tormented by guilt over her younger brother Tom, and learning his fate and what it meant for Iris is one of the more compelling parts of the story. Early on, I was much more interested in Grace and her family, but her story comes and goes throughout the book and loses steam somehow, even though all the pieces come together by the end.

Overall, I’d say this historical novel is quite interesting in parts, but lacks momentum until about the last third of the book, making big pieces of it feel like a slog. I can’t quite put my finger on why, but there’s an odd detachment in long sections of the book. The events of Iris’s experience are described, but I couldn’t get any sense of feeling from them. On the positive side, the elements of the war experiences taken from the historical record are fascinating and horrifying, especially reading about the senseless deaths and terrible experiences of the young men who suffered so horribly in the trenches and battlefields. By the end, the revelation of the secrets that Iris carries throughout her life is a good one, and helps make sense of certain pieces of the novel that seemed random or disconnected.

In Falling Snow takes a bit of patience in parts, but ultimately, I’m glad to have read it. I recommend In Falling Snow for anyone interested in women’s roles in medicine and in reading about World War I- era history.

4 thoughts on “Take A Peek Book Review: In Falling Snow by Mary-Rose MacColl”