There are certain books and series that I tend to rave about — a lot — and anyone who visits my blog from time to time has probably stumbled across my random gushes about one or another of my favorites. One book series that I’m always pushing on unsuspecting friends is Fables, the comic book series by Bill Willingham (available in trade paperback volumes, which is how I read them). 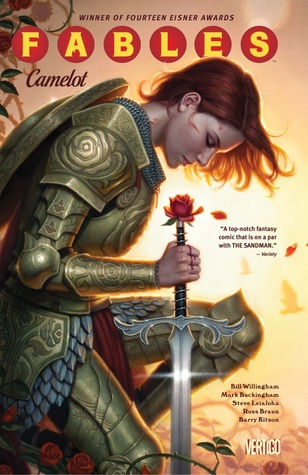 The newest volume in the series is #20, Camelot. Let me tell you, #19 was a heart-breaker, and I opened #20 with trepidation. Would the pain continue? Would there be any happiness left anywhere in the world of #20? How could the story possibly move forward?

I just read #20 today, and — big surprise — loved it. I won’t say too much about the story. If you’re already a Fables fan, you’ll want to go into this one with no advance knowledge. What I will say is that the story moves forward in new and unexpected ways, with a narrative that follows several storylines simultaneously, so that it’s not all tragedy, all the time. The groundwork is prepared for new conflict, and while ominous signs abound, in many ways this volume serves as a bridge from the awful events of the previous book to the next big challenge for our beloved characters. There’s some hope, but also a clear warning that we readers aren’t going to get everything we want — not by a long shot.

Most devastating of all is the fact that there are only two volumes remaining in the series, as creator Bill Willingham has announced that he’s wrapping up the series. How can this wonderful world be done? I can’t even.

So, if you’ve never read Fables, why should you? Here are five reasons why this series deserves to be on your must-read list:

1) World-building extraordinaire: The world of Fables is huge and magnificent. The premise is that all storybook creatures and magical beings are real, and having been banished from their own lands by an evil emperor, now live in hiding in the human world. The laws of Fabletown are complex, with layers upon layers of history and mythology. With each new chapter, the world expands in different and surprising directions, and the internal logic of the series expands to encompass each new facet of the Fables cosmos.

2) Incredible characters: At first glance at volume 1, you may think that the female characters are too comic-style feminine, with their short skirts and heels and flowing long hair. Look again. The women here rock, from tough-as-nails Snow White to bad-ass superspy Cinderella. These women are nobody’s damsels in distress, and while there are love stories and dashing princes, the women are the ones to watch. Not that the male characters are anything to sneeze at. My two favorites are Bigby Wolf — yes, the Big Bad Wolf who’s a chain-smoking tough guy in his human form, and Ambrose, aka Flycatcher, aka the Frog Prince, whose story is surprisingly tragic and heroic. But scratch the surface of any of the books, and you’ll find richly developed characters to care about.

3) Tragedy and triumph: Good versus evil plays out throughout the series, but it’s not all black and white. There are power struggles, horrible losses, wars that threaten all of existence, and heroes who are ready to sacrifice all for the greater good. It doesn’t get more dramatic than some of the long-running story arcs of Fables.

4) Storytelling that takes its time: Because there are so many volumes in the Fables saga, the storytelling can unfold with its own rhythm. Pieces come together that may only have been hinted at; characters and events come back in unexpected ways; an event that seems like a happy ending in one volume may have unforeseen (and usually dire) repercussions down the road.

5) A sense of humor: Even at its bleakest, the writing and dialogue in the Fables books is sharp, witty, and not without its own wicked sense of humor. There’s usually a lighter story thrown in amidst the sadder parts, and there are certainly enough comic relief characters around to lighten the mood whenever needed. Sure, you may be heartbroken at certain places in the story, but I guarantee you’ll be smiling at least a few times during each of the volumes of the series.

I said I’d stick to five, so there you have it. But if I were to go on, I’d just add that the 20 volumes published so far make up the main Fables storyline, but aren’t the entire Fables world. There’s a spin-off series about Jack of Fables that fills up another 9 volumes, stand-alone stories about Cinderella and Snow White, and yet another spin-off series, Fairest. In other words, it’ll take a very long time to run out of reading material!

Even if you don’t normally read comics/graphic novels, give Fables a shot. For excellent storytelling set in a fantasy world overflowing with fascinating characters and complicated plotlines, you really can’t do much better.

10 thoughts on “Five reasons why you should read Fables”