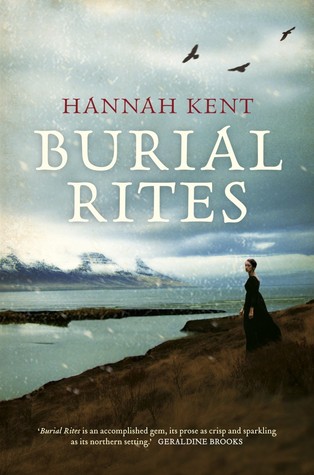 In northern Iceland, 1829, Agnes Magnusdottir is condemned to death for her part in the brutal murder of two men.

Agnes is sent to wait out the time leading to her execution on the farm of District Officer Jon Jonsson, his wife and their two daughters. Horrified to have a convicted murderess in their midst, the family avoids speaking with Agnes. Only Toti, the young assistant reverend appointed as Agnes’ spiritual guardian, is compelled to try to understand her, as he attempts to salvage her soul. As the summer months fall away to winter and the hardships of rural life force the household to work side by side, Agnes’ ill-fated tale of longing and betrayal begins to emerge. And as the days to her execution draw closer, the question burns: did she or didn’t she?

Based on a true story, Burial Rites is a deeply moving novel about personal freedom: who we are seen to be versus who we believe ourselves to be, and the ways in which we will risk everything for love. In beautiful, cut-glass prose, Hannah Kent portrays Iceland’s formidable landscape, where every day is a battle for survival, and asks, how can one woman hope to endure when her life depends upon the stories told by others?

Burial Rites, by debut author Hannah Kent, received heaps of critical praise when it was released in 2013. I finally caught up to this unusual book in time for its paperback release this month, prompted by my commitment to a book group.

Burial Rites is based on real events in Iceland’s history, and provides a fascinating look into a little seen world. The landscape is bleak, harsh, and unforgiving, and the people who live there must deal with the elements and the isolation of their land. Even the families who are well enough off to have servants live in dirt-walled crofts heated by dung fires and peat; the cold is everywhere, and the indoors is consistently portrayed as smoky, dark, and generally unhealthy.

In this world, a woman on her own has no chance to change her life. When we meet Agnes, her death sentence has been declared, and all she can do is wait for it to be carried out. Escape is not an option; there’s no place to run to, and no way to survive in the wild. Agnes is feared and reviled, treated with utter contempt and placed into inhuman living conditions, until she is transferred into the care of a farm family for her last months. With no district jails, the burden and responsibility for housing prisoners falls on the local population, and Agnes moves in with a minor official’s family, where she sleeps in the same room with them and works alongside them. Over time, the family begins to view her as a person rather than as a fearsome murderess, and Agnes in turn opens up and finally reveals the truth about the night of the murders.

I started reading Burial Rites not knowing the outcome of the story, and it wasn’t until I was about 50 pages into it that I finally read the back flap and found out the historical facts of the matter. In a way, I’m sorry that I did; my mood while reading the book changed very much once I knew what would happen — but given that the synopsis above doesn’t give much away, I won’t go into details about it either.

The feel of life in 19th century Iceland really comes through in the writing, and we get a sense of the vastness of the empty landscapes, the far-removed farms, and the struggle to make ends meet that features in all of the characters’ lives. Agnes is an enigma when we first meet her, but as her story unfolds, we receive insights into her wants and fears, and it’s impossible not to feel our hearts break for her by the end of the book. The family dynamic is quite interesting, as a simple, hard-working family with two daughters is forced to live alongside a convicted criminal, and the author does an effective job of showing their feelings change from mistrust and dislike to sympathy and even affection.

I struggled a bit early on to get into the story as it unfolded slowly, and found the place and people names quite difficult to decipher and keep straight at first. Once I got into it, though, the story pulled me along, and I ultimately found Burial Rites to be both very interesting and very moving.

6 thoughts on “At A Glance: Burial Rites by Hannah Kent”