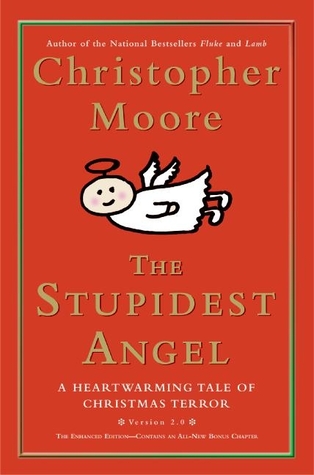 The Stupidest Angel: A Heartwarming Tale of Christmas Terror by Christopher Moore
(published 2004)

What’s a holiday without a little bit of heartwarming terror?

Christmas crept into Pine Cove like a creeping Christmas thing: dragging garland, ribbon, and sleigh bells, oozing eggnog, reeking of pine, and threatening festive doom like a cold sore under the mistletoe.

And a BONUS Thursday Quotables selection:

One of my very favorite holiday-themed literary treats is this zombie insta-classic, ‘Twas The Night Before the Uprising by Mira Grant:

‘Twas the night before Christmas,
when all through the house
Not a creature was stirring, not even a mouse.
The boards had been nailed ‘cross the windows with care
In hopes that the dead would pass by, unaware.

Want more? See the full poem (with convenient, printable PDF!) here, on the website of the nice folks at Orbit.

Book Review: The Girl With All The Gifts by M. R. Carey

The synopsis for The Girl With All the Gifts is certainly intriguing:

Every morning, Melanie waits in her cell to be collected for class.

When they come for her, Sergeant Parks keeps his gun pointing at her while two of his people strap her into the wheelchair. She thinks they don’t like her. She jokes that she won’t bite. But they don’t laugh.

Melanie is a very special girl.

What kind of gifts does Melanie have? Superpowers? Some sort of incredible strength? A secret radioactive aura?

Stop reading now if you don’t want to know!

The Girl With All The Gifts is an incredibly inventive, original, and unpredictable… zombie story.

Yes, it’s a zombie story. And I kind of wish I’d known that from the start. Instead, I began the book wondering what was so special and important about this one little girl and what makes her so dangerous, expecting… oh, I don’t know, outbursts of deadly gamma rays or the ability to kill people with her brain.

But before long, we start to hear about “hungries” — the bands of undead, hungry for human brains, who’ve been preying on the remaining live people in the twenty years since the global disaster known as the Breakdown. Melanie and other children are being held as part of a scientific study conducted at a secure army base, the subjects of experimentation designed to test the fungus responsible for destroying host bodies and taking over. Most hungries are mindless beings, driven only by their need to feed — but Melanie and the other children are something more: Actual, sentient beings with the ability to think, to learn, and to feel. Are they human? Hungries? Or some sort of hybrid?

Teacher Helen Justineau is drawn to Melanie’s quick mind and sensitive heart, and feels compelled to shield her from the cruelties of Sergeant Parks and the cold laboratory of Dr. Caldwell. When the base is overrun, Justineau, Parks, Private Gallagher, Dr. Caldwell, and Melanie form a small band and attempt to survive on the road to the only safe place left in Britain, a sanctuary city called Beacon. But the road is dangerous and deadly, and the odds are very much against them.

As The Girl With All The Gifts moves into road trip territory, we get to know each of the characters as individuals and see them fleshed out from one-dimensional stock figures (teacher, soldier, scientist) into people with histories, desires, pains, and complexities. There are surprises along the way, and all are proven to be much more nuanced than they originally seemed.

The adventure aspects are well-drawn and suspenseful — sometimes almost unbearably so. There’s danger, and lots of skin-crawlingly disgusting encounters with the undead. Unlike the hungries, the plot never shambles — instead, it’s a fast-paced tear from one deadly scene to another. Survival is not guaranteed. Heck, it’s not even very likely. And as the body count rises, we get more and more clues into the origins of the Breakdown, who Melanie really is, and what the future may hold.

I absolutely could not put this book down. With echoes of The Road and Never Let Me Go, The Girl With All The Gifts tell a chilling tale of a future that’s scary and almost — but not quite — hopeless. A recurring theme of this book is the myth of Pandora, who unleashes all manner of woes upon the world but also introduces hope. Melanie herself is but the newest iteration of the disaster that’s destroyed the world as we know it, but she does also represent some sort of glimmer of hope for a world that’s fundamentally different, but perhaps not entirely horrible.

With an ending that’s completely unexpected and yet surprisingly fitting, The Girl With All The Gifts is a fascinating, thrilling read that should not be missed. Whether you’re a fan of zombie stories, post-apocalyptic worlds, or just plain good storytelling, this is one book that you definitely should check out.

The concept is to post about one book from our wish lists that we can’t wait to read. Want to play? Here’s how:

My Wishlist Wednesday book is:

World War Z: An Oral History of the Zombie War by Max Brooks

The Zombie War came unthinkably close to eradicating humanity. Max Brooks, driven by the urgency of preserving the acid-etched first-hand experiences of the survivors from those apocalyptic years, traveled across the United States of America and throughout the world, from decimated cities that once teemed with upwards of thirty million souls to the most remote and inhospitable areas of the planet. He recorded the testimony of men, women, and sometimes children who came face-to-face with the living, or at least the undead, hell of that dreadful time. World War Z is the result. Never before have we had access to a document that so powerfully conveys the depth of fear and horror, and also the ineradicable spirit of resistance, that gripped human society through the plague years.

Why do I want to read this?

Well, I’m definitely late to the party on this one. World War Z has been sitting on my shelf for years, and I’m a little tired of the zombie craze, to be honest… but then I saw the movie trailer for the upcoming Brad Pitt production, so how can I resist?

Plus, I love novels that masquerade as journalism, and this book of “eyewitness” accounts of the zombie war sounds right up my alley.

Quick note to Wishlist Wednesday bloggers: Come on back to Bookshelf Fantasies for Flashback Friday! Join me in celebrating the older gems hidden away on our bookshelves. See the introductory post for more details, and come back this Friday to add your flashback favorites!