Book Review: The Girl You Left Behind by Jojo Moyes

Quick: When you think of looted art and reparations, what do you think of? Nazi Germany? So do most of the bystanders in this novel, which mixes a modern courtroom drama and love story with a devastating glimpse back at a wartime tragedy, with a missing (perhaps stolen) painting serving as the focal point. The twist in The Girl You Left Behind is that the painting in question went missing during the German occupation of northern France during the first World War — but that doesn’t stop popular opinion from tarnishing the main character’s reputation by accusing her of exploiting Nazi theft for her own personal gain. To say it’s complicated is putting it mildly.

In The Girl You Left Behind, we follow two timelines. In 1916, we meet Sophie Lefevre, devoted wife of up-and-coming artist Edouard, who is serving on the front lines with the French forces battling the invading German army. Sophie has been left behind in her home village, helping her sister manage the family inn and struggling to survive with ever-dwindling rations and a hostile German battalion occupying the town. Beautiful young Sophie catches the eye of the German Kommandant, and he is mesmerized as well by Edouard’s portrait of Sophie, which hangs in a back hallway of the inn. Ultimately, Sophie is forced into a decision that pits her own life and honor against the survival of her family and her husband.

Meanwhile, in modern day London, young widow Liv Halston lives alone in a beautiful glass house built by her late husband David, a remarkable and renowned architect who died suddenly four years previously. On their honeymoon, David had bought a beautiful portrait of an enigmatic young woman as a gift for Liv, and this portrait is literally the only spot of color in Liv’s bleak world. Liv meets handsome, gallant Paul and finally feels a spark of life returning — but Paul is an ex-cop now specializing in tracking and returning works of art stolen during wartime. When he is hired by the Lefevre family to find their missing painting and realizes it’s in Liv’s possession, legal drama threatens their blossoming love — as well as David’s legacy and Liv’s reputation.

The Girl You Left Behind tells both parts of the story quite effectively. The first several chapters are devoted to Sophie, and it was somewhat wrenching to have to leave her once the narrative switched to the modern era. Likewise, Liv’s story is affecting and engrossing, and I soon wanted to know much more about this lonely woman and the husband she’d lost. Sophie and Liv are both strong women dealt a series of painful blows in horrible circumstances, and in both streams of the story we see how their personal strength informs their decisions and actions.

The moral dilemma posed is an interesting one. It would appear that the Lefevre descendants are seeking the painting for its monetary value alone, whereas Liv truly loves the painting and feels a connection and fondness for Sophie herself, despite knowing nothing about her story until the legal case gets underway. So who is right in this situation? Are the artist’s descendants entitled to the painting based on their assertion that it was stolen during wartime? Or, barring convincing evidence, is Liv entitled to keep this artwork that she cherishes, even knowing that it may have made its way to her through questionable circumstances?

The story is compelling and well thought-out, and the alternating timelines prolong the suspense and the mystery. We know that something terrible happened to Sophie; we know that the painting disappeared; but the how and why of these occurences is not revealed until close to the end of the book. Author Jojo Moyes gives just enough detail to keep us guessing (although I’ll admit that I’d made an assumption about a key revelation that turned out to be correct), and both pieces of the story wrap up in a way that feels both right and satisfying.

My only quibble with this book is that I wanted to know a bit more about the relatives who started the legal proceedings. They’re referred to as descendants of the Lefevre family, but the exact relationship to the artist isn’t revealed, and we never actually meet them other than seeing them on the other side of the courtroom. I would have liked to have seen their role in the story fleshed out. While it’s implied that they’re only in it for the money (and I suppose their motivation is immaterial if the painting is in fact rightfully theirs), it would have helped me view their side of the proceedings more sympathetically if I’d gotten to know them in any way.

That issue aside, I found The Girl You Left Behind to be quite moving and well thought out. It reveals a piece of history that doesn’t get much attention, while hammering home a universal truth about the horror of war and the irreparable damage done to so many lives. In the contemporary pieces of the story, The Girl You Left Behind is also emotionally involving and very interesting as well — as a legal drama, as a love story, and as a portrait of a woman who has to figure out how to live again.

I’ve been hearing a lot about Jojo Moyes this year, especially since the publication of her highly praised novel Me Before You. The Girl You Left  Behind is the first book I’ve read by this author, but it certainly won’t be the last. Jojo Moyes is a skilled storyteller with a great eye for capturing the small details that make a character feel real, and I look forward to exploring more of her work. 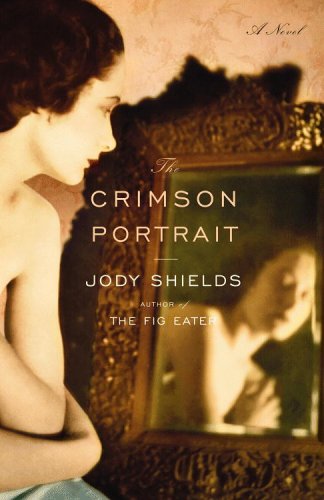 The Crimson Portrait by Jody Shields

Spring 1915. On a sprawling country estate not far from London a young woman mourns her husband, fallen on the battlefields of what has been declared the first World War… But the isolated and eerie stillness in which she grieves is shattered when her home is transformed into a bustling military hospital to serve the war’s most irreparably injured. Disturbed by the intrusion of the suffering men and their caretakers, the young widow finds unexpected solace in the company of a wounded soldier whose face, concealed by bandages, she cannot see. Their affair takes an unexpected turn when fate presents her with an opportunity: to remake her lover with the unwitting help of a visionary surgeon and an American woman artist  in the image of her lost husband. Inspired by the little-known but extraordinary collaboration between artists and surgeons in the treatment of wounded men in the First World War, The Crimson Portrait peels back layers of suspense and intrigue to illuminate the abiding mysteries of identity and desire.

The Crimson Portrait is an atmospheric novel, creating the feeling of life during the Great War. I read this several years ago in the days before Downton Abbey, but now I can’t help but picture this book in a Downton-like setting, with stretchers full of hideously wounded young men filling the elegant rooms of the manor. In The Crimson Portrait, the wounded at this particular estate all suffer from facial injuries, from mild to complete disfigurement. We witness the early stages of facial reconstructive techniques, as doctors and artists work together to alleviate suffering and give these poor young soldiers a chance at something resembling a normal life. Meanwhile, the young widow of the estate sets in motion a plan to alleviate her heartbreak; it’s twisted and unhealthy, sure, but it’s also terribly sad and I couldn’t help but feel compassion for this young woman and her struggle to make sense of her loss.

I always find that WWI-era novels like this one, taking place in the most genteel of settings, pack a huge emotional punch, as they convey the utter horror of war and the mindless tragedy of the losses suffered — all in stark contrast to the lovely greenery of the English countryside. In The Crimson Portrait, we see the waste and ruin of a generation of young men, and the terrible, unending ache left to their survivors. It’s a beautifully written story, fascinating and sorrowful, and I recommend it for anyone interested in reading about that particular time in history.