Bookish and proper Percival Tunstell finds himself out of his depth when floating cities, spirited plumbing, and soggy biscuits collide in this delightful conclusion to NYT bestselling author Gail Carriger’s The Custard Protocol series.

Percival Tunstell loves that his sister and her best friend are building themselves a family of misfits aboard their airship, The Spotted Custard. Of course, he’d never admit that he belongs among them. He’s always been on the outside — dispassionate, aloof, and hatless. But accidental spies, a trip to Japan, and one smart and beautiful doctor may have him renegotiating his whole philosophy on life.

Except hats. He’s done with hats. Thank you very much.

Reticence is a fun, enjoyable wrap-up to a delicious series. The Custard Protocol is four books of fluffy good times, as an odd crew of misfits and eccentrics set sail through the aether on their giant spotted dirigible, seeking danger and adventure all around the globe.

In Reticence, the last remaining unmatched member of the Spotted Custard’s officers finally meets his true love in the form of Dr. Arsenic Ruthven, a Scottish doctor whose no-nonsense approach and absolute devotion to learning and libraries secures her a spot in Percy’s antisocial little heart.

As Arsenic learns to love the crew and vice versa, they set off on a trip first to Egypt and then to Japan, seeking out more supernatural shapeshifters and a missing spy, and discovering all sorts of new and exciting mysteries to solve. With plenty of explosions, tea, and parasols along the way.

As the conclusion to both the Custard Protocol series and, it would appear, the Parasol-verse at large, Reticence features cameos by a who’s who of characters from all of the related books (including the Parasol Protectorate and Finishing School series). Because really, how could we possibly leave this amazing world without one more check-in with Alexia, Conall, Ivy, Lord Akeldama, not to mention Sophronia, Lady Kingair, and more? 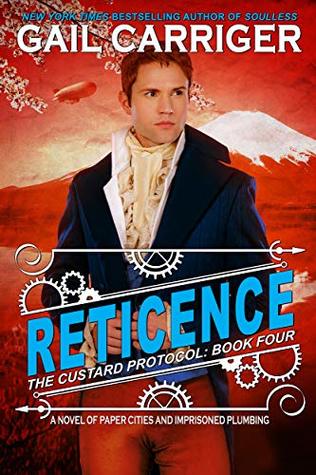 The adventure itself is fun, and seeing Percy lose his heart in the most awkward way possible is highly entertaining. With Percy at center stage, I did miss spending time with Rue and Quesnel, who are much more my favorites, and the wonderful character Tasherit spends most of this book literally asleep.

Once again, the audiobook is a total delight — so much so that I can’t imagine enjoying this series quite so much on the printed page. Narrator Moira Quirk is outstanding, giving each character a unique voice, capturing the silliness to perfection, and keeping the action sequences exciting and easy to follow.

I’m sorry to see the series come to a close. I know there are more related novellas in the works, but I do hope the esteemed Ms. Carriger decides to treat us to yet more full-length books (or, dare I suggest, four-book series?) set in this oh-so-special world. The Custard Protocol is a treat. Highly recommended.

All alone in Singapore, proper Miss Primrose Tunstell must steal helium to save her airship, the Spotted Custard, in a scheme involving a lovesick werecat and a fake fish tail.

When she uncovers rumors of a new kind of vampire, Prim and the Custard crew embark on a mission to Peru. There, they encounter airship pirates and strange atmospheric phenomena, and are mistaken for representatives of the Spanish Inquisition. Forced into extreme subterfuge (and some rather ridiculous outfits) Prim must also answer three of life’s most challenging questions:

Can the perfect book club give a man back his soul?

Will her brother ever stop wearing his idiotic velvet fez?

And can the amount of lard in Christmas pudding save an entire species?

Did all that imagining make you feel light and bubbly, maybe even a little giddy? Well, that’s a bit what reading the Custard Protocol books feels like, start to finish. The books in this delightful series are clearly fantasy, feel-good adventures, featuring exotic locales and extravagant fashion mixed with plenty of tea, camaraderie, and mid-air shenanigans.

As Competence is the third book in the series (with one more still to come), it’s worth taking a moment to reflect on the story so far. In book #1, Prudence, we’re introduced to the young leading lady, Prudence Alessandra Maccon Akeldama, daughter of a preternatural and a werewolf (who themselves are the stars of the phenomenal Parasol Protectorate series). Known as Rue, she’s feisty, independent, and itching for adventure. When her adoptive father, the vampire Lord Akeldama, gives her her very own dirigible, Rue takes to the skies with her best friend Primrose, Prim’s twin brother Percy, the flirty Frenchman Quesnel as ship’s engineer, and a crew full of oddball characters. All sorts of chaotic escapades ensue, including run-ins with weremonkeys and a very attractive werelioness.

In the 2nd book, Imprudence, the crew once again floats off on adventure, this time to Egypt, where they’re pursued by various bad guys, meet a ghost, and befriend some airborne nomadic tribes, And in the midst of all this, Rue discovers the pleasures of physical intimacy and love, and enjoys both immensely.

Competence picks up the story just a little while later, but this time around, Primrose takes over as lead character, occasionally ceding the POV spotlight to her brother Percy. Through their eyes, we continue on to new adventures on board the Spotted Custard (Rue’s dirigible), first in Singapore and then across the ocean to Peru. Prim is a very proper young woman, a steadfast friend to Rue and one heck of a ship’s purser, responsible for keeping the dirigible stocked, fueled, and ready to float off at a moment’s notice. Despite being determined to achieve a society-approved good marriage, Prim finds herself increasingly drawn to Tasherit, the exotically beautiful werelioness who is now a full member of the crew. Prim can’t quite bring herself to venture so far outside the bounds of approved English standards as to enter into a relationship with a woman, but there’s no denying the spark between the two, and as Prim acknowledges, cats can be very persistent about getting what they want.

Meanwhile, the Spotted Custard’s adventures include the discovery of a strange and endangered breed of vampires, unusual weather patterns and weird pirate ships, and a spontaneous heist of helium from an unsuspecting tourist vehicle. Plus, the usual shipboard quibbles and romances, as well as philosophical discussion groups and scientific theorizing.

Competence is just as much fun as the first two books in the series. In this book, the romances in focus do not fit the mold of Victorian social acceptability — but the author’s depiction makes it clear that Rue and friends are open-minded and refuse to be bound by meaningless judgment. On the Spotted Custard, love is love, period… and that’s a very good thing, for the characters as well as for the readers. Prim takes a very long time to make up her mind, but the banter and flirtation between her and Tasherit light up the page, so you know it’s just a matter of time…

Looking back, I’m a little shocked at myself to discover that on first read, I didn’t fall in love with Prudence. It makes me itch to go back and rewrite my original review! Sometimes, though, it’s just a question of mood and timing. Maybe I wasn’t in the right frame of mind to appreciate the Custard Protocol when I first read the first book. When I revisited book 1 as an audiobook, I adored it, and loved the 2nd book just as much.

A note on the audiobooks: They’re amazing! Narrator Moira Quirk does an outstanding job with the characters, capturing their voices, their accents, and their personalities, and making each one distinct and instantly recognizable. She’s also great with the action scenes, and really brings out the humor of Gail Carriger’s fantastically quippy dialogue.

The Custard Protocol series is truly delectable, and Competence is a wonderful addition. And now, we wait… Book #4, Reticence, is due out in 2019.