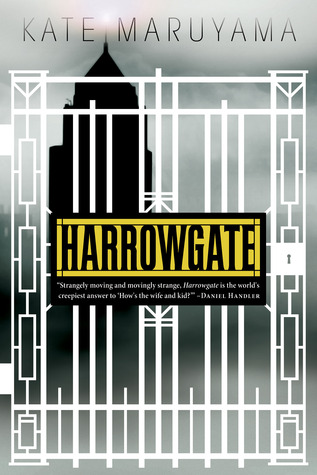 A horror story that is really a tale of love and loss, Harrowgate surprised me with its deep emotional impact and sheer hypnotic pull.

As Harrowgate opens, geologist Michael is rushing home to his pregnant wife Sarah. He’d been out in the field on a remote assignment, and after receiving a cryptic message about an emergency, it has taken him close to two weeks to navigate the Jeep rides and multiple airplane transfers that finally bring him to his New York apartment building. Unable to reach his wife or anyone else, Michael is unsure what to expect. It’s early for the baby to arrive, but surely not so early as to be dangerous. Or is it? Michael is relieved to arrive home and find his wife and healthy son waiting for him — but his bliss is tempered by the presence of an odd stranger, a doula named Greta, who seems to have some sort of hold over Sarah.

At first, Sarah insists that Michael shouldn’t touch the baby — but soon after, Greta urges Michael to be with Sarah and baby Tim as much as possible, to not leave the apartment for any reason, not even to pick up diapers or groceries. Greta’s encouragement sounds more like a warning or a threat, though, and there’s something not quite right about this person who just keeps showing up.

Questions begin to pile up: Why doesn’t Sarah want Michael to answer the phone or go out? Why does the doorman give him such pitying looks? Is Sarah so exhausted by new motherhood that she hasn’t noticed the refrigerator full of spoiled food?

The answers, as they come, are chilling and awful. Michael uncovers the truth about his family’s tenuous grip on happiness — but knows too that this happiness has a dark side, and that his ability to hold onto his family may be slipping away.

To go into any further plot details would be a huge disservice, as Harrowgate is a book to be explored and savored, best enjoyed without any advance knowledge of what is really going on. Looming dread and dismay permeate the book, and while this isn’t a gore-filled horror novel, it does leave the reader thoroughly spooked.

There’s something so creepy about horror stories revolving around birth and babies. Perhaps it’s the contrast of joy and innocence with the darkness looming on the other side. I’ve heard this book compared to Rosemary’s Baby or Breed, but beyond the New York setting and the strange events around a birth, the storylines have little in common.

What Harrowgate actually put me in mind of the most, while reading, was The Silent Land by Graham Joyce, one of my very favorite books. In both, there’s a central story of love that should be perfect — except the reader can feel the edge of something wrong surrounding everything joyful that happens.

And there is quite a lot of joy in Harrowgate, despite the fact that it’s also very, very sad. At its core, Harrowgate is a love story. The love between Michael and Sarah, and the love they both feel for their baby Tim, creates a power in the little haven inside their apartment that keeps the rest of the world at bay.

While I wish the ending has explained things a little more clearly, I was mostly satisfied with the wrap-up. The emotional depths explored in this book carry such strong notes of tragedy and relentless loss, and yet the journey Michael takes in exploring how very much he loves his wife and child is also quite lovely to read.

You don’t have to be a horror fan to enjoy Harrowgate. For anyone who enjoys a touch of creepy gothic mystery set within a familiar landscape, I’d recommend giving Harrowgate a try. Well-written and compelling, this brief novel sucked me in and made it impossible to quit reading before the end.