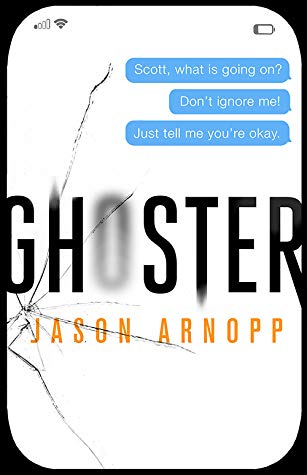 Jason Arnopp – author of acclaimed cult hit The Last Days of Jack Sparks – returns with a razor-sharp thriller for a social-media obsessed world. Prepare to never look at your phone the same way again . . .

Kate Collins has been ghosted.

She was supposed to be moving in with her new boyfriend Scott, but all she finds after relocating to Brighton is an empty apartment. Scott has vanished. His possessions have all disappeared.

Except for his mobile phone.

Kate knows she shouldn’t hack into Scott’s phone. She shouldn’t look at his Tinder, his calls, his social media. But she can’t quite help herself.

That’s when the trouble starts. Strange, whispering phone calls from numbers she doesn’t recognize. Scratch marks on the walls that she can’t explain. And the growing feeling that she’s being watched.

Kate refuses to leave the apartment – she’s not going anywhere until she’s discovered what happened to Scott. But the deeper she dives into Scott’s digital history the more Kate realizes just how little she really knows about the man she loves.

That seems to be the thesis statement of this horror novel in a nutshell.

Smartphones, and people’s obsession with them, may literally be the root of all evil.

Kate is a successful paramedic who has only recently kicked a very nasty smartphone habit. She finally recognized that she was addicted to stalking exes through Facebook, Twitter, and Instagram, and hooked on the mini-highs caused by the dopamine rush she gets each time someone likes her posts or tweets.

And then she meets Scott, someone she first noticed on Tinder, who shows up in the flesh at a digital detox retreat she attends. Their connection is instant and powerful, and Kate is swept up in a fast-moving romance with this hot guy who seems too good to be true.

And ya know… if something seems too good to be true, it probably is.

After an intense few months, Scott asks Kate to move in with him, and she delightedly agrees, giving up her job and apartment and moving hours away to live with him in Brighton. But when she arrives, he’s not there, and his apartment is completely empty. Except… she finds his smartphone, and her old obsession kicks back in, leaving her no room for any other thought but cracking Scott’s password and seeing what his phone can tell her about him and where he might have gone.

But this goes beyond a woman being ghosted by a skanky boyfriend. Weird stuff is happening — like ghostly blue figures who show up in the apartment in the middle of the night, and strange phone calls on Scott’s phone warning Kate to get out. Kate can’t shake the conviction that there’s more to the story than just being cruelly dumped, so she keeps digging, to such an extent that it’s affecting her new job (okay, among other things, she shoots up amphetamines so she can stay awake for her 12-hour ambulance shifts), and her best friend Izzy has to swoop in to pull her back from the edge.

As Kate digs into Scott’s phone, she discovers creepy images and disturbing videos, evidence of his pursuit of other women, and connections to other people who may have also disappeared. And the more Kate digs, the weirder and more disturbing and dangerous it all becomes.

Ghoster is a fast read that drew me in from the beginning… but I didn’t really think it was all that great a read. Sure, it’s entertaining and never dull, but it’s awfully preachy about the downfalls of social media and the need for approval online. And I just had a problem with Kate as a character. She simply didn’t feel real to me at all. Her attitudes, her habits, her social media usage, the way she speaks — none of it felt authentic to me. On top of that, Kate is just hard to like as a person. She makes terrible choices and is a pretty lousy and irresponsible friend.

On top of all that, the reveals we get late in the book about Scott’s inner truths and the key to his personality and behavior seems like revisionist history. We’re led to believe one version of Scott, and it turns out that he’s quite different than first presented. A twist like that can be a good thing, but in this case, I didn’t find it believable.

As for the supernatural aspects of the story, it’s a neat twist, but not as well developed as I would have liked, and too many of the odd occurrences end up having fairly pat, mundane explanations.

I realize this sounds like a pretty negative review, but if I had to assign a numerical rating, I’d give this book 3 stars. Ghoster definitely held my interest and kept me turning the pages, despite the simplistic point it seems to be making about our society’s dependence on social media and the character/plot elements that bugged me.

I’d be interested in hearing opposing views from other readers!