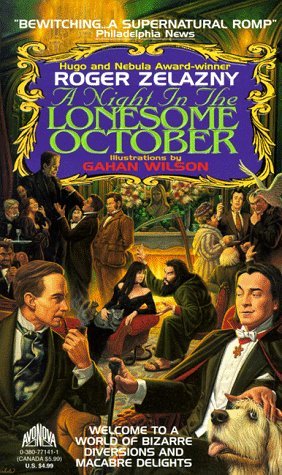 Loyally accompanying a mysterious knife-wielding gentleman named Jack on his midnight rounds through the murky streets of London, good dog Snuff is busy helping his master collect the grisly ingredients needed for an unearthly rite that will take place not long after the death of the moon. But Snuff and his master are not alone. All manner of participants, both human and not, are gathering with their ancient tools and their animal familiars in preparation for the dread night. It is brave, devoted Snuff who must calculate the patterns of the Game and keep track of the Players—the witch, the mad monk, the vengeful vicar, the Count who sleeps by day, the Good Doctor and the hulking Experiment Man he fashioned from human body parts, and a wild-card American named Larry Talbot—all the while keeping Things at bay and staying a leap ahead of the Great Detective, who knows quite a bit more than he lets on.

Boldly original and wildly entertaining, A Night in the Lonesome October is a darkly sparkling gem, an amalgam of horror, humor, mystery, and fantasy. First published in 1993, it was Zelazny’s last book prior to his untimely death. Many consider it the best of the fantasy master’s novels. It has inspired many fans to read it every year in October, a chapter a day, and served as inspiration for Neil Gaiman’s brilliant story “Only the End of the World Again.”

And further info from Wikipedia:

A Night in the Lonesome October is a novel by American writer Roger Zelazny published in 1993, near the end of his life. It was his last book, and one of his five personal favorites.

The book is divided in 32 chapters, each representing one “night” in the month of October (plus one “introductory” chapter). The story is told in the first-person, akin to journal entries. Throughout, 33 full-page illustrations by Gahan Wilson (one per chapter, plus one on the inside back cover) punctuate a tale heavily influenced by H. P. Lovecraft. The title is a line from Edgar Allan Poe’s “Ulalume” and Zelazny thanks him as well as others – Mary Shelley, Bram Stoker, Sir Arthur Conan Doyle, Robert Bloch and Albert Payson Terhune – whose most famous characters appear in the book.

The story reveals that once every few decades when the moon is full on the night of Halloween, the fabric of reality thins and doors may be opened between this world and the realm of the Great Old Ones. When these conditions are right, men and women with occult knowledge may gather at a specific ritual site to hold the doors closed, or to help fling them open. Should the Closers win, then the world will remain as it is until the next turning… but should the Openers succeed, then the Great Old Ones will come to Earth, to remake the world in their own image (enslaving or slaughtering the human race in the process). The Openers have never yet won. These meetings are often referred to as “The Game” or “The Great Game” by the participants, who try to keep the goings-on secret from the mundane population.

I bought a used copy online a couple of years ago, after spending some time tracking down a copy.

I’ve seen this book mentioned on all sorts of blogs and book lists over the years. I’ve read books 1 – 5 of Zelazny’s Amber books (loved them… one of these days, I need to read the rest!). I’ve been wanting to read this one for a while, but now is not the time: I hear that the ideal reading approach is to read one chapter per night during the month of October, and I’m totally up for that! I’m so glad I just re-discovered this lurking on my bookshelf. Now I’m all set for a spooky Halloween read!

10 thoughts on “Shelf Control #169: A Night in the Lonesome October by Roger Zelazny”