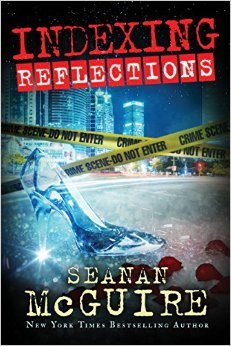 “For her to love me, she had to be willing to kill me. Anything else would show that her heart was untrue.”

The struggle against not-so-charming storybook narratives isn’t the only complicating factor in Henrietta “Henry” Marchen’s life. As part of the ATI Management Bureau team protecting the world from fairy tales gone awry, she’s juggling her unwanted new status as a Snow White, dealing with a potentially dangerous Pied Piper, and wrangling a most troublesome wicked stepsister—along with a budding relationship with Jeff, her teammate.

But when a twisted, vicious Cinderella breaks out of prison and wreaks havoc, things go from disenchanted to deadly. And once Henry realizes someone is trying to use her to destroy the world, her story becomes far from over—and this one might not have a happily ever after.

Indexing: Reflections is New York Times bestselling author Seanan McGuire’s continuing new urban fantasy, where everything you thought you knew about fairy tales gets turned on its head.

Book 2 of the fabulous Indexing series is just as fun and dangerous as the first! The story continues, as Henry’s field team is back out there fighting the good fight to keep fairy tale narratives from killing lots of innocent people. The gang is back together, along with a few new folks (including the HR lady who also happens to be a Bluebeard’s Wife).

It’s not all silly games, though — the stories become dark very quickly, and the various characters, especially Henry and the ever-fascinating Sloane, must face down the demons of their darkest secrets and the scary bad guys of their pasts in order to save the day and save themselves.

Sloane is technically a secondary character, but in Reflections, she gets to take the first-person narrative for several chapters, and she’s a hoot, particularly in the audiobook, where her voice comes across as a potty-mouthed, spoiled, super cranky Valley Girl. Kudos to narrator Mary Robinette Kowal for making Sloane just so excellent.

The voice-work throughout is pretty terrific, only faltering a bit for some of the male characters. This didn’t bother me as much in the 2nd book, because overall the narration is just so compelling and captivating, really capturing the humor and the tension and the darkness so convincingly.

I really ended up loving both of the Indexing books, and want more! Will there be more? Please tell me there will be more! While Reflections comes to a very satsifying conclusion after a truly epic adventure, there’s plenty of room for further adventures of Henry and her field team.