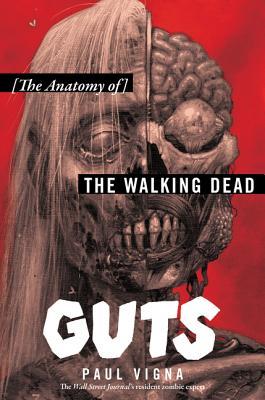 In this first and only guide to AMC’s exceptional hit series The Walking Dead, the Wall Street Journal’s Walking Dead columnist celebrates the show, its storylines, characters, and development, and examines its popularity and cultural resonance.

From its first episode, The Walking Dead took fans in the United States and across the world by storm, becoming the highest-rated series in the history of cable television. After each episode airs, Paul Vigna writes a widely read column in which he breaks down the stories and considers what works and what doesn’t, and tries to discern the small details that will become larger plot points.

So how did a basic cable television show based on Robert Kirkman’s graphic comic series, set in an apocalyptic dog-eat-dog world filled with flesh-eating zombies and even scarier human beings, become a ratings juggernaut and cultural phenomenon? Why is the show such a massive hit? In this playful yet comprehensive guide, Vigna dissect every aspect of The Walking Dead to assess its extraordinary success.

In the vein of Seinfeldia,Vigna digs into the show’s guts, exploring its roots, storyline, relevance for fans and the wider popular culture, and more. He explores how the changing nature of television and media have contributed to the show’s success, and goes deep into the zombie genre, delineating why it’s different from vampires, werewolves, and other monsters. He considers why people have found in zombies a mirror for their own fears, and explains how this connection is important to the show’s popularity. He interviews the cast and crew, who share behind-the-scenes tales, and introduces a cross-section of its diverse and rabid viewership, from fantasy nerds to NFL stars. Guts is a must have for every Walking Dead fan.

I’ve only recently become a convert to the cult of The Walking Dead. After years of turning up my nose, I finally broke down and gave it a try this past spring, and immediately became completely hooked. I binge-watched the entire series to date within about 2 months (not bad for 99 episodes!), and read all of the graphic novels as well. So naturally, when I heard about Guts, I had to read it, and the timing couldn’t be better, as season 8 of The Walking Dead starts TOMORROW. *jumping up and down and hyperventilating with anticipation*

Guts is a truly fascinating book about the show, examining it from all angles and giving thoughtful consideration to its popularity and relevance in today’s world. The author includes recaps of the major events of each season so far, and covers the show’s history, the background of Robert Kirkman, who created the comic series and is an executive producer of the TV series, some anecdotes from behind the scenes, and the ups and downs of production, including the still-ongoing lawsuit by the first showrunner, Frank Darabont, against AMC.

The book also includes interactions with fans, including some observations from a day at Walker Stalker Con, a fan event at which fans interact with cast and crew. The description of the vibe at Walker Stalker shows the deep impact of The Walking Dead on its devoted fan base.

Most interestingly, author Paul Vigna goes deeper than the pop culture tidbits (such as fan favorites, iconic weaponry, and best episodes) to show the philosophical underpinnings of The Walking Dead, connecting the show’s impact to sociopolitical and economic climate of the era. He examines the religious themes that find their way into the show, as well as the political constructs of the various societies and the ways in which both Maslow’s hierarchy and Hobbesian views on the natural state of man can be discussed in relation to themes of community and family as shown in TWD.

Some random and various pieces from the book:

Hobbes argues that the natural state of man, as in a state without the collar of a central government, is one where every man is at war with every other man. There is no industry or security, no artistic pursuits, just the “continual fear and danger of violent death, and the life of man, solitary, poor, nasty, brutish, and short,” Hobbes writes… In Hobbes’s argument, people enter a social contract and surrender some of their personal freedoms in exchange for the kind of security and permanence that will release them from the terror of that brutish life in the wild.

Like giving up their endless wandering to join the community of Alexandria, right?

On political structures in TWD:

What seems to matter most is that a leader in the post-zombie apocalypse is decisive… Negan and the Governor are homicidal and suicidal, but they are also decisive. Negan may be as liable to throw you into an oven as feed you a spaghetti dinner, but in his decisiveness, he can bring some sense of comfort — so long as you don’t cross him.

Acknowledging that “Rick has made enough mistakes to fill a book,”, the author comments:

Now, I don’t have a problem with Rick making mistakes. It wouldn’t be realistic for him to make the right choice every single time. Rick’s greatest quality, apart from an uncanny survival instinct, is the ability to simply choose. In a world where life is measured in hours and days rather than decades, that is an essential quality to have.

The biggest key to survival, really, is how quickly you can shed your old morality and discover a new one.

And finally, a quote from the season 7 finale, spoken by Maggie, that sums up the essence of TWD. This is who the main characters are and what they do — and what makes us love them:

This is what Rick, Maggie, and all the other characters in Alexandria, the Hilltop, and the Kingdom represent, and why we keep tuning in, season after season.

If you’re a fan of The Walking Dead and happen to be inclined to dig in and go beyond the blood and gore, definitely pick up a copy of Guts. It’s a quick, interesting read, with just the right mix of plot points and food for thought.