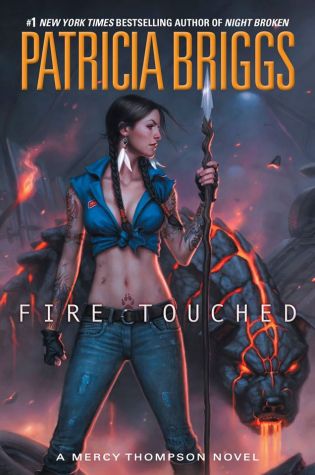 I love this series, truly – madly – deeply. Why do I even bother writing reviews anymore? You know the bottom line is going to be READ THIS BOOK… or for those who haven’t had the pleasure of meeting Mercedes Athena Thompson Hauptmann yet, READ THIS SERIES.

Okay, a little more, perhaps? Fire Touched is the 9th book in the always outstanding Mercy Thompson series by Patricia Briggs. Mercy is a coyote shapeshifter as well as a talented VW mechanic. She’s a woman who never backs down and stands up for herself, her family, her pack, and pretty much anyone who needs her protection — and this is what lands her and the pack in a huge mess in Fire Touched.

Mercy is married to Adam, Alpha of the Columbia Basin Pack — a werewolf pack, that is. Mercy has just finished recovering from the life-threatening events of the previous book, Night Broken, when a new danger emerges. There’s a giant troll on the Cable Bridge of the Tri-Cities, and the local police are smart enough to call in the pack for help. Mercy and a bunch of werewolves battle the big nasty creature (who seems to enjoy smashing cars like an overgrown toddler playing with Matchbox toys) and ultimately defeat him — but Mercy takes the unprecedented step of declaring the Tri-Cities the territory of the pack and warning the fae that the pack will offer sanctuary to all who need their help.

At the moment, this includes Aiden, who looks like a bedraggled 10-year-old, but is in fact centuries old, having been taken into the fae’s unreachable domain of Underhill as a child and kept there ever since. Aiden has escaped, and now has gifts — including the ability to burn with his touch — and the fae would very much like to get their hands on him. By offering sanctuary, Mercy and the pack have set themselves up in direct opposition to all of the fae, and have potentially set the stage for the werewolf vs. fae war that Bran Cornick, leader of all of the North American werewolves, has been working so hard to avoid.

As the story progresses, we see the implications of Mercy’s declaration more and more. The pack will be under siege from all who question their right to claim territory. There are still pack members who resent Mercy’s membership in the pack, seeing as she’s a coyote and not a wolf, and Adam has finally had enough of the sniping. He declares that all werewolves in his pack will treat Mercy with respect, and if they say or do anything further against her, he will end them. And he means it. Strangely, this finally seems to bring the pack into a united team. A dire and unintended effect of the declaration is a break with Bran. Bran can’t afford to turn this into a global war against the fae, as his priority is always the good of ALL werewolves, so he formally breaks with Adam’s pack.

Sob. I love Bran. I love Adam. No sundering! Please work it out, guys.

Okay, so what did I think of this book? Well, as I said, I just pretty much heart everything about this series, so of course I loved Fire Touched too. That said, though, it’s probably not the best of the best, even though it’s awfully darn good.

What was missing for me here was the emphasis on relationships that my favorites in the series have. Mercy and Adam are in a really good place in their marriage, and I’m happy for them, but we don’t actually spend much time in this book just seeing them together. The pack isn’t terribly present in Fire Touched. Yes, they’re in the big fight on the bridge with the troll, and yes, we see the pack meeting where Adam draws his line in the sand about the pack’s treatment of Mercy. But beyond that, the pack is mostly just background. I’ve come to adore so many of the pack members — Ben, Warren, Darryl, Honey — but they’re not central to the plot here, and I missed them.

A lot of Fire Touched was about the fae and the Grey Lords, and how Mercy and Adam deal with their bargains and deceits. It was engaging, but I missed the pack drama and politics. On the plus side, it was nice to see Thomas Hao and Margaret Flanagan again (and if you don’t know who they are, read the story “Fairy Gifts” from the Shifting Shadows collection).

The bad thing about reading a new Mercy Thompson book the second it comes out is the loooooong wait for the next one! Okay, I’m done with Fire Touched — now what? Patricia Briggs’s website shows that there will be a 10th Mercy book and a 5th Alpha & Omega book (yay!), but no date is listed for either, and I assume whichever is next will be published in 2017.

So hey! If you haven’t read any Mercy books, or if you’re behind, now’s a great time to dive in and catch up! Trust me, you won’t be sorry.

Want to know more about the worlds of Patricia Briggs? Check out a few of my previous reviews: