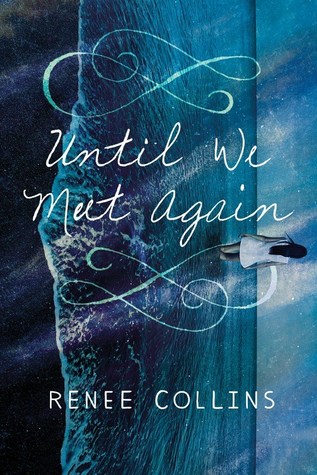 An upper class seaside retreat is the setting for this YA timeslip novel by Renee Collins. Main character Cassandra, age 17, is spending the summer with her mother, stepfather, and 3-year-old brother at a rented beachfront mansion, and she’s bored to tears. Until one day, she wanders down the path between the property’s bushes and ends up on the private beach, where she meets a (very attractive) young man named Lawrence.

The two connect, quickly, and soon come to realize their deep feelings for one another. But trouble looms: Lawrence is the summer guest of his wealthy uncle Ned, who plans for Lawrence to go to Harvard and then law school, then enter the family business. Ned also seems to be pushing a pretty flapper named Fay at Lawrence, and is quite insistent that Lawrence get involved with her. Something seems shady, all right — and when Cassandra hits the library microfiche to see what she can find out about Lawrence and his family, she stumbles upon a shocking news article, which reveals that Lawrence will be murdered on the beach in only a few weeks. Cassandra vows that she’ll find a way to stop it, and between her modern-day research and Lawrence’s snooping in his own time, the two race the clock to save his life… and hope to find a way to be together afterward.

The novel leaves the timeslip element mostly unexplained, although Cassandra agonizes over whether she can or should influence the events of 1925, for fear that the consequences will be devastating. And yet, she plunges right ahead once she realizes Lawrence’s life is on the line.

In terms of plot, there are pros and cons. Pro-wise, the concept of the beach as a portal between the times is interesting. It’s not that either Lawrence or Cassandra has a special ability, but rather, it’s the place that’s powerful. Anyone who passes through the bushes onto the beach can see whoever’s there, from either time — so the beach isn’t some sort of special protected bubble, it’s just that very few people actually go there and so no one else has discovered the odd time disconnect. Also strong is the portrayal of Cassandra as a girl ready for something to happen, throwing herself headfirst into a crazy, emotion-fueled adventure that really should be beyond her belief. I liked the sense of Cassandra’s drive and devotion, and how determined she became to do whatever she needed to do.

In the middle ground for me are the 1920s-era standards — flappers, mobsters, crooked businessmen, hints of Prohibition-defying smuggling. I suppose this may be newer in the realm of young adult fiction, but lately it seems to be done almost to death. While Lawrence’s side of the story is interesting, it’s a pretty surface-level glide through that world, and I didn’t feel that it really explored the setting in a deep enough way.

I could also go either way on the insta-love aspect of the story. Cassandra and Lawrence seem to fall head over heels in love from one moment to the next, but I know that mainly because I was told that’s how they felt, not because I saw it developing organically. Still, I do give the author some credit on this issue, because a teen romance in an exotic setting really could convincingly blossom from casual acquaintance to love-of-my-life status, given a dramatic or extreme enough set of circumstances.

Pieces that didn’t really work for me related to Cassie’s family life. I didn’t get her mother’s issues with Cassandra: She seemed to always be suspicious, very demanding of Cassandra’s time, and then, weirdly, pretty insistent on Cassandra dating some random boy. Why would she be pushing her to date this guy? It just didn’t make sense to me. Cassandra also had this habit of lying about her trips to the beach by announcing she was going running, but half the time she seemed to be in a sundress when she said this, so again, a little hard to believe.

Still, I don’t want to give the impression that I didn’t enjoy the book as a whole. Once the race-against-the-clock element merges with the intense love story, the plot begins zooming forward, and has a great sense of drama that gives a high-stakes feel to the whole thing.

In a way, this book is a metaphor for the quintessential summer romance. Two teens, dragged by their families to a summer vacation spot, meet and fall in love, but have the awful end-of-summer separation looming over them, giving the romance a super-heightened sense of intensity and passion. They’re from two different worlds, their time together is brief, and not being adults yet, they don’t have the control over their futures or lives to prolong the relationship beyond the summer. Take out the timeslip element, and that’s what we have here: Cassandra and Lawrence are flung into each other’s lives because they just happen to have been brought to the same place; they immediately fall in love, but they know they’ll be forced apart when the vacation ends. How glorious for teens in that extra-dramatic period of life, to get the star-crossed lovers experience!

Until We Meet Again combines the best elements of a summer romance with the dramatic build-up of a tragic, doomed love story. In some ways, the ending of the story reminded me of one of my very favorite Doctor Who episodes… although I won’t go into spoiler territory by saying which one. While some pieces of the plot rang a little hollow for me, overall I’d say that Until We Meet Again is an exciting, engaging, quick read that’s worth checking out. And while the timeslip plotline felt a bit thinly developed in places, I also need to recognize that I’m an adult who’s read a LOT of timey-wimey fiction over the years, and for a reader in the target young adult audience, this may be a first encounter with the concept of time travel and its consequences — which could make it a really new and exciting reading experience.

On a final note, this was a very fun read for a chilly week in November! There’s nothing like reading about sunny beach days to chase the cold away.

2 thoughts on “Book Review: Until We Meet Again”