I’m absolutely thrilled to spotlight Destiny’s Plan, a brand new release and first novel by Victoria Saccenti. I’ve known Victoria through our online book club for a few years now, and I’m delighted that my friend is now a published author! Please join me in celebrating Destiny’s Plan! 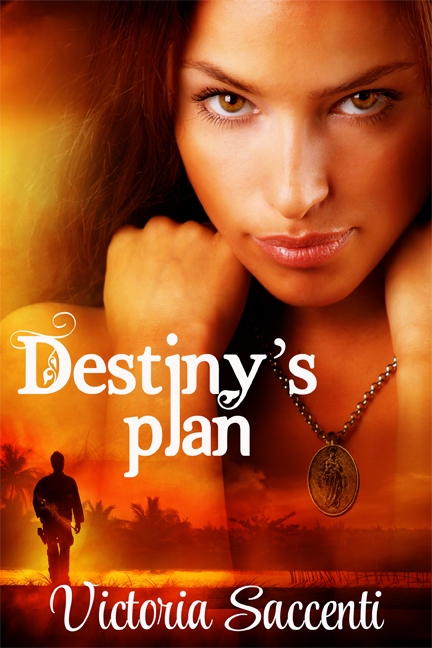 When Raquelita Muro and Matthew Buchanan meet by chance on a Greyhound bus between Texas and Tallahassee, neither suspects Fate is about to take over.

Raquelita, a gentle girl under the heel of her abusive mother, finds this kind young man a miracle.  Matthew, an idealistic young soldier, discovers this sweet-natured girl is an angel in need of a guardian.  However, the next stop on Matthew’s journey is Fort Benning to report for deployment to Vietnam, while Raquelita’s destination is set at her mother’s whim.  Regardless of the forces tearing them apart, they discover a way to secretly span the distance, to end up closer than ever.  But Fate is rarely kind.  The vagaries of war—and the unstable tempers of Raquelita’s mother—intervene, leaving both ill-fated lovers feeling there is no hope for their love.

Set in the turbulent era of the Vietnam War, Raquelita’s and Matthew’s story is one of love, loss, lost faith, shattered memories, deferred dreams and broken promises.  Will Fate tear apart these two damaged souls, leaving them desperately alone forever, or will they finally overcome Fate, their bond stronger than they ever thought possible?

Victoria was gracious enough to answer some questions about her writing, her book, and her life:

Congratulations on the release of Destiny’s Plan! How do you feel, now that your book is out there in the world?

Hi Lisa, thank you for the good wishes and the wonderful opportunity to speak about my baby, Destiny’s Plan. Now that it’s published, I have an internal revolving door of emotions. Happiness, excitement, and trepidation are taking turns in and out.

What was your inspiration for this book?

I worked for an international airline for many years. During my travels I observed young servicemen, either in groups or alone, journeying back and forth on orders. More than once, I wondered about their lives, their loves, their fears, and their beliefs. The idea sprouted there.

Is this a personal story for you? How much of the characters’ lives represent your own experiences?

It is not personal, in the sense that I didn’t use anyone I know. For the rest, I suppose all writers inject into their stories topics and themes they’re familiar with. I grew up in a Spanish-Latin environment. I used that as a reference for the interaction and conflict between Raquelita and her mother, Isabel.

Why this particular time period? Is there something about the era that really speaks to you?

At the risk of sounding a bit schizophrenic, Matthew, a central character in the story, was pretty adamant. He demanded this time period.

Have you always wanted to write? This is your first novel — when did you realize that you needed to write it, and how did you get started?

I’ve been writing on and off for years. As a child, I wrote fairy stories to act out during playtime. When I was stationed in London, my letters were full of tales about the different regions I visited. I never thought I would go this far. Not until the night when Matthew popped into my head with his story from beginning to end. It was kismet <g> — here comes that theme again — because the next day a friend suggested I should write a book. Here we are today.

What does a typical day of writing look like for you? What’s your overall process?

After trial and error I realized, my best writing is in the morning. Initially, I tried to write late at night, after coming home from work. What a disaster. The next day I had to delete everything. I need sleep to see the images and scenes clearly. If I’m rested, I hear the characters better, the dialogue is crisper, and I have to be in my cave with the door locked. This doesn’t mean transmission ends when I stop writing. By now my husband recognizes the blank stare, when I’m connected to the other voices.

I know you went through a lot of ups and down on your path toward getting published. What words of advice or encouragement would you offer aspiring writers?

Neil Gaiman’s quote, “Write your story as it needs to be written” doesn’t always apply to the business/ money aspect. Nevertheless, writing is magical, so I say, hang in there, it takes patience, believe in your book, prepare for rejection, surround yourself with supportive friends – my friends kept me sane. If anyone decides to go Indie, hire a good editor—massive emphasis on the last bit. Despite the challenges, don’t give up on the dream. Persevere for the characters, they’ve sent out an invitation into their world, go with it.

Are you working on anything new yet? What will we see next from you?

I’m almost finished with Book 2 of the Destiny Series. Marité’s Choice should be ready to roll by spring of 2016. I also have in mind a spinoff story based on Richard, a surprisingly attractive character from Destiny’s Plan.

I know you’re a big reader – what are your favorite genres, authors, books? What do you consider the biggest influences on your writing?

I am an equal opportunity, avid reader. If it’s good, I’ll jump right in. I’m a total sucker for historical fiction. <g> In that genre, the incomparable Dorothy Dunnett sits way on top, she’s followed by Salvador de Madariaga, Anya Seton, and Diana Gabaldon. I also love magical realism, a la Isabel Allende, Gabriel García Márquez, and Laura Esquivel. I adore Tolkien, Frank Herbert’s Dune series, Ray Bradbury, and the list goes on. I only hope these outstanding writers left an imprint, however small, in me.

For someone picking up Destiny’s Plan for the first time, what would you want a reader to know?

Destiny’s Plan is a story about love in times of war, duty to one’s country, and spiritual growth. Expect a few twist and turns along the way.

If you had to use just five adjectives to describe Destiny’s Plan, what would they be?

You had to ask. <g> Epic, Romantic, Emotional, Entertaining, Powerful.

Please join me in wishing Victoria great success with Destiny’s Plan and the books yet to come!

A native of Cuba, Victoria loves writing generational sagas and romances with complex, emotional content. In Destiny’s Plan, the readers travel from stately San Antonio, to peaceful Central Florida, to the jungles of Vietnam, and to the hectic streets of New York during the turbulent 60’s.  She is currently writing Book Two of the Destiny’s Series.

And be sure to check out the YouTube book trailer: https://youtu.be/0-ky8VA6nrE

One thought on “Introducing… Destiny’s Plan by Victoria Saccenti”