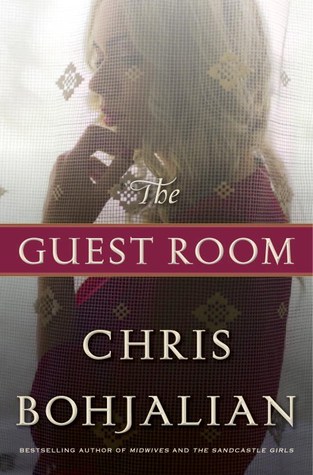 The Guest Room by Chris Bohjalian
(to be released January 5, 2016)

When Richard Chapman offers to host his younger brother’s bachelor party, he expects a certain amount of debauchery. He sends his wife, Kristin, and young daughter off to his mother-in-law’s for the weekend, and he opens his Westchester home to his brother’s friends and their hired entertainment. What he does not expect is this: bacchanalian drunkenness, a dangerously intimate moment in his guest bedroom, and two naked women stabbing and killing their Russian bodyguards before driving off into the night. In the aftermath, Richard’s life rapidly spirals into a nightmare. The police throw him out of his home, now a crime scene; his investment banking firm puts him on indefinite leave; and his wife finds herself unable to forgive him for the moment he shared with a dark-haired girl in the guest room. But the dark-haired girl, Alexandra, faces a much graver danger. In one breathless, violent night, she is free, running to escape the police who will arrest her and the gangsters who will kill her in a heartbeat. A captivating, chilling story about shame and scandal, The Guest Room is a riveting novel from one of our greatest storytellers

This is my first Wishing & Waiting post in about a month — and what better way to jump back in than with a new book by Chris Bohjalian? It almost doesn’t matter what the plot is about — I just have complete faith that whatever he writes will be great!

Looking for some bookish fun on Thursdays? Come join me for my regular weekly feature, Thursday Quotables! You can find out more here — come share the book love!

6 thoughts on “Wishing & Waiting on Wednesday: The Guest Room”