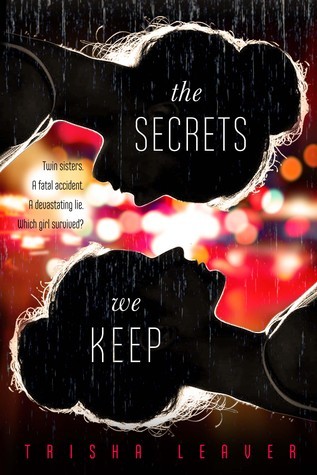 Maddy and Ella, identical twin sisters in their senior year of high school, were best friends since birth… right up until the first week of freshman year, when Maddy’s pursuit of popularity led her to dump quiet, artistic Ella and become the belle of the ball. From that moment onward, the two occupied a home together, but had next to nothing in common. Maddy was always at the center of the in-demand social circle, busy with perfect boyfriend Alex, and obsessed with looks, clothes, and status. Ella found a new best friend, Josh, who shared her interests in art and anime and became her constant companion.

That’s all backstory. Early on in The Secrets We Keep, tragedy strikes. On a rainy night, on the way home from a party, Maddy’s car goes off the road and one twin is killed, the other seriously injured. But who survived? As it turns out, Ella had driven Maddy’s car to pick her sister up — and because Maddy’s clothes were soaked from waiting in the rain, Ella gave Maddy her coat and sweatshirt.

The driver is pulled alive from the wreck, while the other sister is dead at the scene. The car is Maddy’s; the driver is presumed to be Maddy — especially since the dead girl is wearing Ella’s clothes.

When Ella wakes up in the hospital, she at first has no recollection of her name or her circumstances. But there’s a boy holding her hand, dozens of flower bouquets in her room from her many friends, and the name “Maddy” written on the board in her room. She assumes she herself is Maddy, and it’s not until she insists on seeing her dead twin in the morgue that her own memories come flooding back.

And here’s where my belief in this story pretty much went out the window: Ella feels tremendously guilty for causing her sister’s death. She sees how happy her parents are when she wakes up and they greet her as “Maddy”, and she hears from Alex and the nurses how many of “her” friends are crammed into the halls and waiting rooms, cheering for her survival. Ella decides on the spot that her parents wouldn’t be happy if they knew the survivor was Ella, not Maddy. Furthermore, she decides that she owes Maddy a debt for killing her, and the way to make it up to her is to live her life. So Ella keeps her own identity a secret and vows to live Maddy’s life, which becomes a bit harder once she has to attend her own funeral and act like her best friend Josh means nothing to her.

Hoo boy. Things unravel from there. Ella uncovers a dark secret about a very not-nice plot of Maddy’s. Ella does a not-very-good job of impersonating Maddy when she goes back to school, breaking all sorts of rules about appearance, bitchiness, and maintaining mean girl status quo. Instead of going to her own honors classes and maintaining her perfect grades, Ella follows Maddy’s undemanding schedule and has to force herself to dumb down her test performance. In short, it’s a mess.

Does any of this make sense? Not really. Ella’s thinking can be chalked up to shock at first, but she’s really much too smart a girl to actually believe that her parents are happy that Maddy survived and she didn’t. And I couldn’t see any logic in the idea of living Maddy’s life as a way to repay her sister. Maddy is still dead, after all. How can pretending to be her make a difference? And then there’s Ella’s belief that Maddy being alive makes so many more people happy — why does this matter to Ella? She doesn’t even like these people.

It’s really a ridiculous situation, and I found it pretty much impossible to buy the premise. As clichéd as the old stand-by amnesia plot is, the whole set-up here would have been much more plausible if Ella hadn’t regained her memories. If she actually believed herself to be Maddy, it would be interesting to see her trying to piece her life back together, when it was never actually hers. But having Ella pretend to be Maddy for the flimsiest of reasons just defies all logic. The piece about her parents really irritated me, to be honest. So they bury Ella and try to rebuild their lives with Maddy — and then when the truth comes out, they’re forced into a brand-new mourning period for the daughter they believed to be alive, yet they’re supposed to now be overjoyed by Ella’s survival? It’s just weird and cruel, and I felt that Ella’s treatment of her parents was especially callous.

I realize this all sounds as though I didn’t like The Secrets We Keep at all, and that’s not entirely the case. On the more positive side, the writing itself is fast-paced and kept my attention, so even though I kept exclaiming over how unbelievable the plot was, I also didn’t want to put the book down. Granted, a part of me wanted to keep reading to see if there was some great twist coming or if the ending would justify it all. And, well, no, that’s not what happened… but still, I did keep reading and I did want to see how it worked out, so there’s that.

Not every book is for every reader, and despite having a premise — at least according to the synopsis — that sounded really intriguing, the final result just didn’t work for me.

6 thoughts on “Book Review: The Secrets We Keep by Trisha Leaver”