I don’t usually review erotica… and I tend to avoid like the plague book covers featuring chiseled male chests or artfully draped semi-clad torsos. You know the ones I’m talking about. 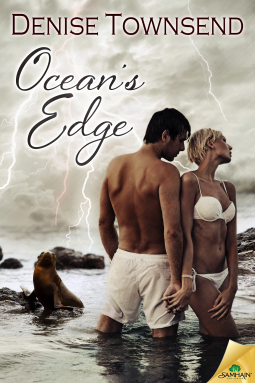 But I’m willing to make an exception for the works of Denise Townsend — Denise Townsend being the erotica-writing alter ego of one of my very favorite urban fantasy authors (whose more mainstream works still feature scorching hot sexytimes).

So when I saw NetGalley featuring an ARC of Ocean’s Edge by Denise Townsend, I jumped on it.

Here’s  what you need to know about her Ocean stories — Ocean’s Touch, Ocean’s Surrender, and now Ocean’s Edge:

Each features a strong woman, recovering from pain or trauma in her past. Each also features a selkie, a super sexy magical being from the sea who appears on the beach as a smoking hot male who wants nothing more in life than to help the main character find her way back to health and happiness. And each involves some majorly hot and heavy action.

In Ocean’s Edge, the main character Rachel is a rape survivor who’s retreated into a shell, but is slowly regaining her confidence through her devotion to martial arts training. When she meets the selkie Conleth, she learns to reclaim her own sexuality, and with Con’s loving guidance, is able to turn to Jake, who runs the dojo where she trains. Between (and I mean literally between) Con and Jake, Rachel is given the support she needs to move past her attack, work with the police to track down her assailant, and start building a future that includes a healthy self-image and the love of a good man.

What I enjoy so much about these books is the strength of the women. Rachel is not a victim. She’s been through a terrible ordeal, but it’s her own inner core of strength and determination that enables her to survive and thrive. Denise Townsend’s main characters are not damsels in distress; they’re women who save themselves. The love interests are there for them when they triumph, but not to triumph on their behalf. These are women who fight their own battles, and also know what it takes to pursue the passion and pleasure that they deserve.

Plus, okay, these books are hot. And explicit. And steamy. And… yeah, hot. And hey: Selkies. If all of this appeals to you, then definitely check out Denise Townsend’s books. You can thank me later.