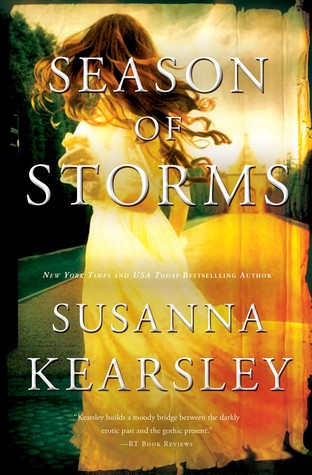 In the early 1900s, in the elegant, isolated villa Il Piacere, the playwright Galeazzo D’Ascanio lived for Celia Sands. She was his muse and his mistress, his most enduring obsession. And she was the inspiration for his most stunning and original play. But the night before she was to take the stage in the leading role, Celia disappeared. Now, decades later, in a theatre on the grounds of Il Piacere, Alessandro D’Ascanio is preparing to stage the first performance of his grandfather’s masterpiece. A promising young actress – who shares Celia Sands’ name, but not her blood – has agreed to star. She is instantly drawn to the mysteries surrounding the play – and to her compelling, compassionate employer. And even though she knows she should let the past go, in the dark – in her dreams – it comes back.

Sourcebooks Landmark has been reissuing Susanna Kearsley’s older books with new, gorgeous covers, and I wholeheartedly approve. Let’s take a moment to appreciate the beauty of these books:

But back to Season of Storms. Originally published in 2001, Season of Storms mostly holds up, although (as the author acknowledges in a preface to the new edition), old technology makes certain passages and exchanges feel clunky. Still, the emotions and connections have a timeless quality to them that makes the plot work, more or less, despite the occasional awkwardness. (Remember using someone else’s computer to send an email, then getting the response printed out on a piece of paper courtesy of the computer owner? And don’t even get me started on the whole telephone issue…)

The book is much more about modern-day Celia Sands than her predecessor, whom we know only through her portraits and through the stories that have come down over the years about her mysterious disappearance. Our Celia is a bit of a blank, to be honest. She’s a 20-something aspiring actress, having very limited stage success in tiny roles, supporting herself as a waitress, and realizing that her funds are about to run out, when she’s offered the role of a lifetime, taking on the lead role in the play that the original Celia never got a chance to perform. Off our Celia goes to a lovely Italian villa, with cast members, the director, a few shady characters, and the dreamy grandson of the playwright. Gee, where is this going?

What I liked: Quite a bit, actually. Susanna Kearsley simply excels at creating a feeling of gothic romance among lush and beautiful settings, mixing in a sense of menace and otherworldly threat with the more mundane stories of people finding their way and working through their pains and sorrows. The setting in the Italian countryside evokes a luxurious time gone by, an air of mystery, and a sense of being removed from the real world. The concept of family here is very au courant: Celia’s mother is a self-centered actress with no moral compass. Celia instead was mostly raised by Rupert and Bryan, a gay couple who provided her with stability, love, and responsible role models during her mother’s self-absorbed absences and misadventures. In Season of Storms, family is where you find it — the people, regardless of blood or legality, who take you in and nurture you unconditionally.

What I didn’t like quite so much: This book, at 500+ pages, is slow and long. The first half is mostly the set-up, and it takes far too long to get to the heart of the romance, the mystery, and the adventure. Celia’s character is not well enough defined for us to really care all that much about her. I never felt a connection with her character — I knew about events in her life, but in the current drama, didn’t get a true sense of how she would feel or why. Additionally, her acting chops aren’t really established. Apparently, she’s brilliant on stage, but I found this hard to believe.

But back to the plus side: Once we finally get to the mystery in the latter half of the book, it’s quite good. There’s intrigue, red herrings, and danger. The resolution to certain parts of the mystery were truly a surprise. Also to the good: The secondary characters are all nicely drawn, with interesting lives and quirks, all unique but not too far-fetched, with personalities that stand out, are believable, and quite enjoyable.

Overall, as with all of Susanna Kearsley’s books, I enjoyed Season of Storms and was glad to have read it. It’s not her strongest, and I felt it suffered by the lack of truly interesting people in the two lead romantic roles. Still, for atmospheric romance with a touch of doomed longing, it’s hard to beat a Susanna Kearsley novel. I’d still recommend Marianna or The Winter Sea as better starting points for newbies — but for the author’s fans, Season of Storms is yet another must-read.

If you’re interested in learning more about this author’s works, check out my reviews of some of her other books:
Mariana
The Firebird
Shadowy Horses
The Splendour Falls