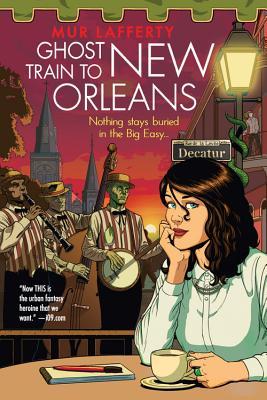 Ghost Train to New Orleans is the second book in the Shambling Guides series — and if you enjoyed the first book, you’ll want to read this one as well.

The series, which starts with The Shambling Guide to New York (reviewed here), tells the story of Zoe Norris, a nice ordinary travel writer who takes a job working for a publisher that specializes in travel guides for the non-human set. Be warned: The proper term for these folks is “coterie” — definitely do not refer to them as monsters! Among Zoe’s colleagues are vampires, zombies, incubi and succubi, goddesses and dragons… and it seems that every time Zoe turns a corner, she discovers some new type of coterie, much to her amazement.

In Ghost Train to New Orleans, Zoe and her team head off to the Big Easy (via the titular Ghost Train — which is in fact quite literally a ghost train). Their mission is to write their next travel book — but first, they need to survive. Among the big revelations here is the fact that Zoe is no mere human: She’s a rare human coterie known as a citytalker — and again, take that term literally. Zoe has the ability to form a psychic (or spiritual) bond with a city, so that the city can speak to her. The problem is, Zoe has has no training on how to use her gift, and could badly use a mentor before she gets into her usual heaps of trouble.

The tongue-in-cheek narration that provides a lot of the series’ charm is back in book 2:

She liked her coworkers, mostly, but was always acutely aware that many saw her as a meal they weren’t allowed to touch.

Also back is the vast array of scary creatures who might possibly want to help Zoe, but who are just as likely to put her in mortal danger. Added to that, Zoe’s boyfriend is on the verge of zombiehood, her closest ally, a water sprite, is missing, and her previous mentor has formed a seemingly permanent melding with the city of New York, and it’s clear to see that Zoe needs to stay on her toes.

In Ghost Train to New Orleans, the mythology of the series is further developed, with new and different supernatural beings, a lot of historical backstory for citytalkers like Zoe, and some new rules regarding ghosts, possessions, demons, and more. New Orleans itself adds a nice flavor, and it’s quite fun to see city landmarks woven into the fabric of the coterie world. Likewise, the author quite inventively works Hurricane Katrina into the supernatural narrative in a way that feels organic to the story, so that the damage to New Orleans is integral to the ability of the city to communicate with Zoe — and factors into just how the city treats Zoe once they’ve connected.

The narrative zooms along from one action sequence to another, and Zoe’s perspective is as wry and snarky as always. Even when lives are at stake, the tone is zippy and energetic, and never veers too long into serious or weighty territory without a well-placed smart-ass comment or two to steer things back into the quirky groove.

I did notice quite a few instances of awkward phrasings and wording errors (for example, the use of “ascent” in a place where only “descent” actually makes sense), and had to wonder whether it was the writing or the editing that was problematic — was there a rush to publication that resulted in these types of seemingly careless errors? I normally wouldn’t make too much of this sort of thing, but it happens enough in Ghost Train to actually be distracting, and therefore is worth noting.

Putting that aside, Ghost Train to New Orleans is a good follow-up installment, and succeeds at maintaining the through-story while introducing new elements and laying the groundwork for future adventures. Some answers are provided, but even more new dilemmas and mysteries are introduced, and that’s just the right mix for a 2nd book in what appears to be an open-ended, ongoing series. I’m intrigued enough — and having enough fun — that I’ll be back for more. I didn’t see anything on the author’s website confirming a 3rd book, but based on the wrap-up of Ghost Train, it’s clear that there are more travels in store for Zoe and her team… and I’d guess lots more trouble (and scary new coterie) as well.