Book Review: The Opposite of Maybe by Maddie Dawson 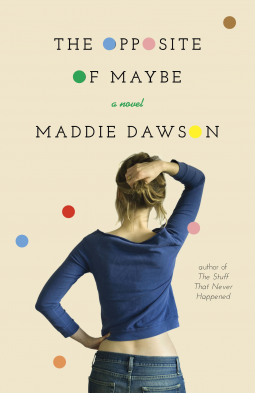 Rosie and Jonathan are “that” couple — you know, the ones whose lives are massively entertaining to their friends because they just never seem to do things the normal way. While all the rest of their friends were busy getting married, buying houses, and having kids, Rosie and Jonathan stuck to their free-spirited artistic ways, keeping things loose, not needing the standard-issue adult lives that everyone else has. Their escapades become the stuff of legends — when the circle of friends gets together for drinks, nothing makes the crowd laugh more than reminiscing over Rosie and Jonathan stories and the crazy shenanigans that ensue.

But at age 44 and after 15 years together, Rosie isn’t so sure that the free and easy life is really a choice any more — maybe it’s just a mask for an inability to grow up? Rosie was a poet and Jonathan a potter when they met, but now Rosie mixes in teaching community college ESL classes with her writing, and Jonathan has completely given up pottery-making for his newest obsession, collecting antique teacups. (Seriously, teacups.) When Jonathan is contacted by another collector and offered the opportunity to partner on a new teacup museum (seriously, a teacup museum), he’s ready to uproot their lives in Connecticut and move to San Diego in pursuit of his dream… and expects Rosie to share the excitement.

It’s not quite so clear for Rosie, though. For starters, her eccentric, cranky grandmother. Soapie is eighty-eight, falls down a lot, and seems to be losing her edge. Soapie raised Rosie since the age of three, when Rosie’s mother died in a freak accident. Rosie can’t stop worrying about Soapie — even though Soapie insists she’s fine and wishes Rosie would stop fussing. Finally, Jonathan convinces Rosie to move to San Diego, and despite years in agreement that they didn’t need to get married like everyone else, he even proposes and gets Rosie to believe things can work. But then, a last-minute teacup emergency (seriously, a teacup emergency!) means the cancellation of wedding plans, and Rosie finally snaps, sending Jonathan off to San Diego on his own, and moves back into Soapie’s large house, envisioning some quiet time to lick her wounds and act as her grandmother’s caretaker.

And Rosie really is wounded, despairing over what her life amounts to:

If a film crew followed her around, what would they see? Nothing. She might as well be dying, for all she’s accomplished. She never had a family, she never owned a house, she never even bought a brand-new car, had a disastrous love affair with an inappropriate person, or even dyed her hair some ghastly shade of red. How does this happen, that you get to be forty-four and you don’t have anything — not even an ill-advised tattoo — to show for it?

The hitch in Rosie’s short-term plan is that Soapie doesn’t really need her. There’s a charming gardener named Tony who’s already moved in and is doing a great job of keeping Soapie on her feet and looked after, and Soapie’s long-time love George is by her side every evening, drinking and dancing and being a perfect courtly (and, as Soapie puts it, “ardent”) suitor (after visiting his wife Louise, suffering from advanced Alzheimer’s, each afternoon at the nursing home). Before long, this odd foursome has formed a family unit of sorts, and Rosie’s eyes are opened to new and fresh possibilities.

Oh, and minor detail? What Rosie takes for early menopause turns out to be a very unexpected pregnancy… and Jonathan most adamantly does not want to be a father. And then there’s sweet Tony, who adores pregnant women, babies, children, people in general, and pretty much everything about life. Rosie wants to give Jonathan a chance to redeem himself, to become a part of their baby’s life, and to prove his commitment to their relationship — but at what cost? Why is Rosie the one who always has to give things up? Soapie insists that Rosie needs to find her “joie de vivre” — and just maybe, the baby, the new crazy family she’s found, and even Tony can help her find that spark again, but is it the right path for her?

The Opposite of Maybe is a refreshingly charming look at adult life and adult dilemmas. Rosie is a terrific character: a woman who’s spent far too long accepting that her life is the way it should be, rather than questioning whether it’s enough. She’s smart and funny, full of passion, and when she finally gets a backbone, she’s actually quite remarkable. Tony is just a big sweetie — younger than Rosie, sexy (of course), struggling to establish a routine with his 5-year-old son in the wake of a divorce, and one lovely, loving guy. Soapie, too, is a treat, verging perhaps on the stereotype of the crazy, tough old lady with a heart of gold, but with her own secrets and a zest for life that is undiminished by the insults of old age and failing health.

It’s lovely to see the shifting definitions of family as portrayed in The Opposite of Maybe. Clearly, a blood tie is not the be-all and end-all. Jonathan may be the baby’s biological father, but he’s so clearly not daddy material. As Soapie, George, Rosie, and Tony open their home to all the friends and strays who populate their lives, they’re surrounded by chaos, fun, and connections that help to root Rosie more firmly in their Connecticut home.

The writing is clever and quirky, and I really got a kick out of the dialogue, particularly between Rosie and Tony, who make each other laugh even while driving each other crazy. (Tony has the habit of misusing words and mangling the English language, which after a while one suspects is done deliberately just to get a rise out of English-teacher Rosie).

The author portrays the indignities of being pregnant at 44 with both compassion and hilarity: In one scene, Rosie is befriended by a nice young mother and taken to see the local playground where the mommies congregate. When she tells her new friend her age, the woman replies, “Wow, that is seriously so brave of you! Forty-four! I just hope I’m still having sex when I’m that age!” Thud. Not only that, but she also kindly adds as she’s leaving, “This is like the place where everybody comes between naps. Sometimes the grandmothers come, too, ha ha! You’ll like them.”

My only quibble with The Opposite of Maybe is the character of Jonathan. He’s a hapless, well-meaning guy who can’t see beyond the end of his own nose (or his teacups) — and after a while, I simply could not see why Rosie would persist in trying to make things work with him. Even when he commits to trying to be the man Rosie needs, he’s just so clearly NOT, and Rosie is far too smart to go along for as long as she does, thinking that Jonathan can change and that the life she wants is possible with him. It’s a staple of romantic fiction that the female lead doesn’t see what’s so obvious to the reader — the dull guy who needs convincing is just NEVER Mr. Right in this kind of story, and the wrong-on-paper guy with the heart of gold usually is oh-so-right. Given that, the outcome of the love story here is all too certain from the get-go. Jonathan just isn’t the guy for Rosie, and keeping him in the role of the primary man in her life feels like an artificial means of stretching out the romantic complications and uncertainties.

Still, I found The Opposite of Maybe a completely delightful and engaging read. There are moments of real sorrow and emotion, as well as humor and joy that feel deserved and organic. Fast-paced and entertaining, I gobbled this book up in about 24 hours, and just didn’t want to put it down before the end. If you enjoy reading about flawed but lovable adults facing real-life choices, with writing that’s zippy and full of fun, don’t miss The Opposite of Maybe.

8 thoughts on “Book Review: The Opposite of Maybe by Maddie Dawson”