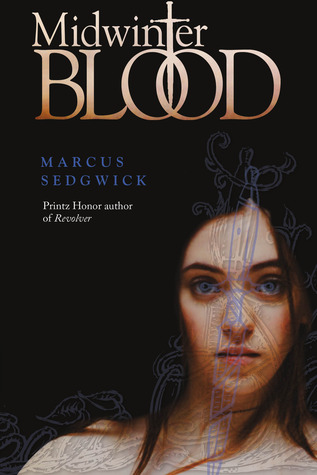 Seven stories of passion and love separated by centuries but mysteriously intertwined—this is a tale of horror and beauty, tenderness and sacrifice.

An archaeologist who unearths a mysterious artifact, an airman who finds himself far from home, a painter, a ghost, a vampire, and a Viking: the seven stories in this compelling novel all take place on the remote Scandinavian island of Blessed where a curiously powerful plant that resembles a dragon grows. What binds these stories together? What secrets lurk beneath the surface of this idyllic countryside? And what might be powerful enough to break the cycle of midwinterblood? From award-winning author Marcus Sedgwick comes a book about passion and preservation and ultimately an exploration of the bounds of love.

I first heard about Midwinterblood almost a year ago, when I read Eoin Colfer’s fabulous review of it in the New York Times and just knew I had to read it. I bought myself a copy immediately, and then one thing and another happened… and every time a Top 10 Tuesday topic came along focused on top TBR books, I always had Midwinterblood right at the top… and suddenly, here I am, almost a full year later, and I’ve only now read the book. And could kick myself for waiting so long.

In case you missed the news, Midwinterblood has just been named the winner of the 2014 Michael L. Printz Award for Excellence in Young Adult Literature. And all I can say is, well done, you award givers, you!

In Midwinterblood, seven connected tales moves backward chronologically from 2073 to days too long ago to have a date attached. In each story, the same characters meet — in different bodies and in different relationships — always seeking and finding, always sharing a deep bond that’s both familiar and mysterious. Always, there’s an Eric and a Merle — sometimes in love, sometimes a brother and sister, sometimes unrelated except by an unusual friendship.

The lead story, “Midsummer Sun”, sets the tone, as a reporter named Eric Seven journeys to a remote island to investigate rumors of a strange and powerful plant and its impact upon the lives of the islanders. Upon arrival at the island, Eric meets a young woman named Merle, as well as the island’s elders, and he quickly realizes that things on the island are a bit strange. But just as quickly, that becomes unimportant to Eric, as it’s his meeting with Merle that consumes all of his thoughts:

Eric Seven does not believe in love at first sight.

Even in that moment, the moment that it happens, he feels his journalist’s brain make a correction, rubbing out a long-held belief, writing a new one in its place.

He did not believe in love at first sight. He thinks he might do so now.

From the first page, it’s clear that there’s something dark and disturbing under the surface, and by the end of the first story — like a nightmare come to life — an ominous mood, full of loss and sacrifice, has been set that carries through the rest of the book. 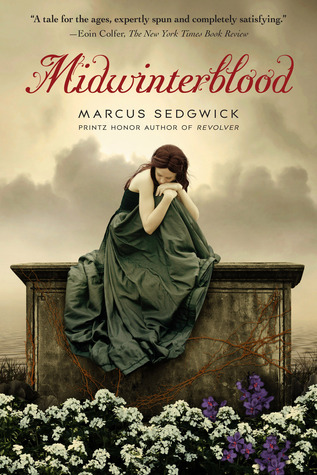 What a beautiful cover! The paperback will be released in April 2014.

In subsequent stories, we meet an archaeologist uncovering both the remains of a Viking tomb and a remnant of a 20th century war; a painter and the small girl who befriends him; twins who hear a ghost story; a Viking king’s young children; and a king and queen from so long ago that their story feels almost mythical. Through each tale, the two lost souls find each other all over again:

One night, as they parted, Erik whispered something precious to Merle.

“Say that you will never leave me,” he said, holding her hands.

“I shall never leave you,” said Merle.

“Is it so easy to say?” Erik asked, surprised.

“But it might not be so easy,” Erik said. “Our love is forbidden. It might become impossible for us to be together.”

It’s hard to describe the mood that takes hold while reading this book. It’s beautiful and hypnotic, with writing that hints and flows, casting a spell of magic and loss and a love that lasts forever. Midwinterblood is not a long book, but every page and every line is carefully constructed to serve the whole, so that reading this book feels like living inside a dream at times.

I’m puzzled as to why this book is defined as young adult. I certainly can’t see any reason for it. Still, I suppose it’s a good thing, seeing how Midwinterblood just won the Printz Award.

I absolutely recommend Midwinterblood. It’s beautiful and sad, creepy and lovely, and altogether different from anything else I’ve read.

Midvinterblot by Carl Larsson. This painting was an inspiration for the author and figures into some of the stories.