Caught up in a moment of boyhood competition, William Bellman recklessly aims his slingshot at a rook resting on a branch, killing the bird instantly. It is a small but cruel act, and is soon forgotten. By the time he is grown, with a wife and children of his own, William seems to have put the whole incident behind him. It was as if he never killed the thing at all. But rooks don’t forget . . . Years later, when a stranger mysteriously enters William’s life, his fortunes begin to turn—and the terrible and unforeseen consequences of his past indiscretion take root. In a desperate bid to save the only precious thing he has left, he enters into a rather strange bargain, with an even stranger partner. Together, they found a decidedly macabre business. And Bellman & Black is born.

I’m going to keep this brief (ha! that’ll be a first for me!), largely because I’m just not at all sure what to say.

At a loss for words? Without a ready opinion? This really is a first for me.

1) I found this to be a quick, engrossing read. It zipped along, and I never had to force myself to continue.

So what IS it all about?

It’s about a talented and beloved boy, William Bellman, who seemingly has everything, and grows up with a magical touch for business. Every endeavor he touches seems to thrive. His ideas are golden, his people skills superb. Nothing could be

better. Yet after a terrible sickness sweeps through his village (scarlet fever, perhaps?) and kills most of his family, he makes a deal — which he doesn’t actually remember — with a mysterious man, and then turns his business acumen to a new enterpise: Bellman & Black, an enormous retail establishment dedicated to death. Bellman & Black specializes in funerary supplies, and succeeds beyond Bellman’s investors’ wildest dreams.

Much of the book is spent in chronicling William’s business skills and ideas. This is a busy, hard-working man. Work becomes his obsession, and he only remembers the mystery man, Black, in bits and pieces. Yet lurking behind all of William’s triumph’s is the sense of a debt to be paid, and sooner or later he knows there must be a reckoning. 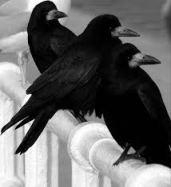 Rooks — black birds similar to crows — are constantly in the background of the story, and their presence, along with random facts about rooks, pops up repeatedly.

The official title of this book is Bellman & Black: A Ghost Story. And I’m not sure why. The rooks represent death, and being haunted by memories, and all sorts of other things (I guess), but I never felt that this was an actual ghost story, other than William being haunted by his forgotten past and all that he’d lost.

It’s odd: This book definitely held my interest, and I was full of admiration for the author’s gift with words. The language is often beautiful, with unusually graceful descriptions and turns of phrase. But at the same time, I spent the entire book at a bit of a loss as far as seeing the point, and never felt like the story gelled in any real way.

Maybe it’s me. Or maybe this is a well-written novel that lacks a certain oomph. Certainly, for a ghost story, you’d expect a scare or two, or at the very least, a sense of growing dread or doom. Yes, there’s an ominous undercurrent — but that’s about it. So perhaps I missed the point in some major, glaring way. But if not, then I’d have to say that Bellman & Black, while beautifully written, doesn’t live up to its billing as a ghost story and doesn’t deliver an ending that’s as full of impact as it’s probably intended to be.

I read it. I enjoyed the reading experience. But I don’t feel touched or enlightened by this book. The books that I love stay with me after I close the covers. This one, despite its many lovely passages, isn’t one of those.

For what it’s worth, I’m probably one of the last people on the planet who hasn’t read Diane Setterfield’s The Thirteenth Tale. Even though Bellman & Black wasn’t a peak reading experience for me, I admire the author’s talents enough to want to read her earlier novel, and will probably seek out her books in the future as well.

6 thoughts on “At a Glance: Bellman & Black by Diane Setterfield”