Book Review: How To Be A Good Wife by Emma Chapman 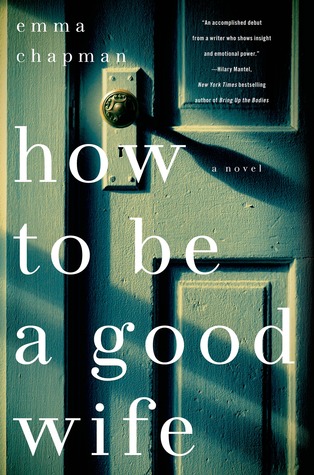 Don’t let the title fool you: This is not a feel-good story, it’s not a happy story about marriage, and it’s certainly not chick lit.

In How To Be A Good Wife, Marta is a sad and lonely middle-aged housewife suffering terribly from empty nest syndrome now that her only child, son Kylan, has grown up and moved to the city. Marta is left behind in her spotlessly clean home in an unnamed small Scandinavian village, where she compulsively keeps an eye on the clock and makes sure everything is perfect for her husband Hector. As a new bride some 25 years earlier, Marta’s mother-in-law gave her a gift of the how-to guide “How To Be A Good Wife”, and Marta follows it to the letter: “Make your home a place of peace and order”, “Your husband belongs in the outside world. The house is your domain, and your responsibility”, and “Never hurry or nag him along. His time is precious, and must be treated as such” are some of the words of wisdom which Marta has memorized and tries to live by.

Marta has been on medication for years — anti-depressants, I initially assumed, although soon enough it becomes clear that there’s more going on here than just depression. Marta decides to go off her meds, just for the sake of making something happen — and something does indeed happen. She starts having flashes, seeing things and hearing things that aren’t there. She begins seeing a young girl in pajamas, who starts appearing more and more frequently, until Marta cannot tell what is real and what is not. As these flashes become more frequent, Marta becomes convinced that they are buried memories coming to the surface — but are they?

Bit by bit, Marta’s rediscovered memories present to her a version of her marriage that doesn’t match at all with what she’s believed all these years. Early on, I found it curious that all of Marta’s memories of her wedding and a vacation are couched in terms of how Hector described the events. Why doesn’t she have her own memories to rely on? As the bits and pieces keep popping up, we see a new twist on what we’ve been told, and the picture shifts dramatically toward terror and nightmares.

But is any of it real? Marta has lived in isolation for so many years; apparently, she has no friends or real connections in the village. Hector and Kylan are her entire world, but if what she remembers is true, then Hector is not what he seems. As Marta becomes desperate to discover what really happened and to escape from what she perceives as a dangerous life, she has to try to convince Kylan of the truth of her memories — but at the same time realizes that if she succeeds, Kylan may very well be the one to suffer the most.

How To Be A Good Wife is a gripping psychological thriller that reminded me in some ways of Before I Go To Sleep by S. J. Watson. Memory is the key here — but in this book, the reliability of Marta’s memories is not at all certain. Her instability and fear could very well stem from the memories that have resurfaced — but they could also be signs of a deep psychosis.

I suppose this book could also be looked at in a more symbolic way, showing how the old-fashioned expectations of a wife’s role completely eat away at a woman’s individuality, until she can’t even be sure of who she really is without guidance from her husband. But for me, I found myself pretty convinced by Marta’s memories, and thus found it especially painful as she is continuously treated as someone with a mental illness needing treatment rather than being listened to and taken seriously.

The writing here flows quickly, and even the detailed descriptions of housework take on an ominous tone as they paint a picture of a woman trapped in a sterile, outwardly beautiful environment that is empty at its core. Marta does exhibit signs of being “off” — her obsession with the time, her desperate clinging to her grown son, her attention to every smudge and mark in her perfect house — so when she also starts acting out based on her flashes of memory, it’s understandable that it might look like crazy to an observer.

How To Be a Good Wife moves quickly and is practically impossible to put down once you get past the mid-point. It’s chilling and disturbing and utterly engrossing. Even when I thought I knew what had happened and what was going on, I kept being surprised by the way things turned out, and found myself getting VERY upset on Marta’s behalf as she struggles to be heard and to be believed.

And really, if a book can upset its reader in such a personal way, then you know the author is doing something right! If you like suspenseful writing and characters with depth, check out How To Be A Good Wife. Just don’t expect a tidy ending with rainbows and sunshine. The ending is bleak and ambiguous, and totally in keeping with the tone of the entire story. I think this is one book that will stay with me and eat away at me for quite a while, and that’s a testament to its power.

Whew. I feel like I’ve really been put through the ringer with this one. If you’ve read it, let me know! You know how some books just beg to be discussed? How To Be a Good Wife definitely is one of those.

Note: After finishing the book, I Googled the title and found out that there really was a small book published in the 1930s called How To Be A Good Wife, which I assume is the same book that Marta receives here. It’s been reprinted and is available from Amazon and other online booksellers — not that I want to buy it, but it might be amusing to read through someday.

6 thoughts on “Book Review: How To Be A Good Wife by Emma Chapman”