Note: I’m going to run this post by Grammarly for proofreading, just to make sure those pesky apostrophe fairies didn’t sneak in behind my back and rearrange my punctuation marks. They’re so annoying when they do that — it’s almost impossible to cope! 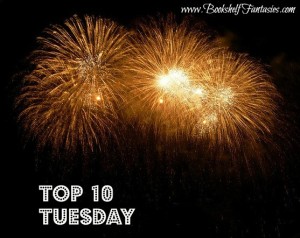 Top Ten Books I Was “Forced” to Read (either by teachers, friends, other bloggers, book club) — doesn’t necessarily have to be a BAD thing. Could be required reading, yes, but also book club, or just super enthusiastic friends “making” you read something!

Based on that, my list mostly consists of books I’m glad to have read, even though I might not have read them on my own without a few nudges and pushes.

1) Titus Andronicus by William Shakespeare: This was the first book on the syllabus for my Shakespearean tragedy class in college, and to tell the truth, it kind of cracked me up! If this were a modern-day thriller, probably everyone would think it was completely over the top, what with hands being cut off, tongues cut out, people baked into pies and served to their parents… I probably never would have read this on my own, but for the sake of rounding out my knowledge of Shakespeare, I guess I’m glad it was required reading!

2) Letters from Thailand by Botan: I wasn’t “forced” into this one so much as emotionally compelled. It’s a wonderful book, and kind of a romantic story (which I wrote about here) as to why I had to read it.

3) The Notebook by Nicholas Sparks: My good friend insisted to me that I *had* to read this book. I finally did, and thought it was awful. (Sorry, all you Sparks fans!) When I saw my friend again, I said to her, “I hate to tell you, but I really thought The Notebook was terrible”. Her response? “I know! I couldn’t believe it — that’s why I wanted you to check it out!” I think that’s the book equivalent of someone giving you a bite of their food and saying, “Here, taste this! It’s so gross!”

5) The Song of the Lioness quartet by Tamora Pierce: My daughter is an avid bookworm (like mother, like daugher!), and when she was a pre-teen, this book series was her absolute favorite… and I just had to see what all the fuss was about. Turns out, I ended up really liking the Alanna books too — perhaps a bit more bed-hopping than I would have wanted her to read at that age, but on the other hand, this series about a girl growing up to be a knight had all sorts of great grrl-power messaging in it as well.

6) Fifty Shades Darker and Fifty Shades Freed by E. L. James: Mock these books all you want to (hey, I’ve done my share!), but admit it — they’re addictive. I thought the writing and plot of the first book were laughable… but I still had to keep reading to see how it would all turn out.

7) Henderson the Rain King by Saul Bellow: This is yet another book that my husband used to rave about, so finally I had to read it just to prove that I listen to him sometimes! And I liked it quite a bit.

8) Portnoy’s Complaint by Philip Roth: My 11th grade high school teacher recommended this book to me for an assignment… and it was so inappropriate! I think he recommended it solely based on the fact that I’m Jewish — so, hey! Try some Philip Roth! My guess it that he hadn’t actually read it himself, although if he had, then wow, what a creepy recommendation to make to a 15-year-old girl. I was so excruciatingly embarrassed to read this book at that age. Perhaps as an adult reader, I’d be able to see literary value in it, but at that age? Just awful.

And wrapping it all up with a couple of childhood favorites

9 & 10) Island of the Blue Dolphins by Scott O’Dell and The Witch of Blackbird Pond by Elizabeth George Speare: These were both required reading at some point while I was in school… and boy, did I love them. In fact, I think I’m overdue for a re-read of both!

What books were you forced to read? And are you glad or mad about it?

27 thoughts on “Top Ten Tuesday: Top Ten Books I Was “Forced” to Read”