Don’t let the pulp fiction sensationalism of the cover fool you: Joyland is, at heart, quite a lovely and nostalgic book.

Devin Jones is one heartbroken 21-year-old in the summer of 1973. No sooner does he take a job at a North Carolina beachside amusement park than his long-term girlfriend — his first love — dumps him for another guy. By letter. Left to lick his wounds, Devin immerses himself in the carny world. He learns the Talk, gets a crash-course on how to be a ride-jockey, and spends sweltering days “wearing the fur” — that is, dressed up as Howie the Happy Hound, mascot of Joyland, dancing the hokey-pokey with delighted crowds of kiddies.

Joyland is a sweet non-Disney-fied world of fun — non-corporate, old-timey, with an ancient owner who really just wants everyone to be happy. There’s a shadow beneath Joyland’s wholesome facade. Rumor has it that a ghost haunts the Horror House, ever since the murder of Linda Gray four years earlier. The crime was never solved, and so Linda waits… for justice, for vengeance, for recognition, for release. Or so the story goes.

Meanwhile, Devin finds friends and a place to forget his sorrows for a while, and come fall, when he should be returning to college, he makes the decision to join the year-round staff of Joyland and stick around for a while. Despite his deep-down loneliness, Dev finally begins to come out of his shell, thanks mostly to the unexpected connection he finds with a beautiful but isolated woman and her wheelchair-bound son. But he can’t quite shake his interest in the fate of Linda Gray, and the more he digs, the more he realizes that the murderer might still be around — perhaps even at Joyland.

So what did I think?

I guess it goes without saying that Stephen King can write. I mean, he could probably write a computer technical manual and you’d either be in tears or screaming in terror by the end. In Joyland, King’s writing is full of his trademark sense of longing for a time gone by. The story is told by Devin from the vantage point of a man in his sixties, looking back at a pivotal moment in his younger days, the summer in which he left behind his childhood innocence for good. We are immersed in the experience of a young man in love, and can feel his longing and his pain with each step, with each memory, with each sad song playing on Dev’s record player in his boarding house room. The writing is down-to-earth and yet lovely at the same time:

I’m not sure anybody ever gets completely over their first love, and that still rankles. Part of me still wants to know what was wrong with me. What I was lacking. I’m in my sixties now, my hair is gray and I’m a prostate cancer survivor, but I still want to know why I wasn’t good enough for Wendy Keegan.

The murder mystery itself is only a small part of the book. Devin’s compulsion to solve the murder is a thread that connects his experiences, but in actuality I’d say only about 25% or so of the plot really focuses on the crime and the ghost. Much more important is Dev’s involvement at Joyland, the friends he makes, and the bond he forms with Annie and Mike Ross. There’s a Summer of ’42 vibe in parts of the story (if you’ve seen the movie, you’ll know what I mean — I hope). Granted, Joyland takes place 30+ years later than the movie, but there are similar themes: innocent boy, one perfect summer, mysterious (beautiful) older woman… well, I won’t elaborate, but that’s what I kept thinking of as certain events developed in Joyland.

As for the murder, the climax is exciting — but feels a bit well-worn as well. The location, the circumstances, even the weather all feel a bit familiar, like something out of a drive-in flick from a few decades ago. Maybe that’s what Stephen King was shooting for? After all, the story is truly heavy on the nostalgia, with a wistful sensibility for the time and place it portrays. So perhaps the ending was designed to feel old-timey as well, in keeping with the overall mood and setting of the book? Something to ponder, anyway. The identity of the murderer wasn’t terribly shocking, if you go with the assumption (as I did) that he would have to be either a character we’d already met or someone closely connected to Joyland. I won’t give anything away here, but I will say that by the time the murderer is revealed, there really was only one other person it could possibly have been. Still, it unfolded in a believably scary and threatening way, and I enjoyed every bit of the big reveal and its aftermath.

Overall, Joyland is a terrific read. Devin makes a sympathetic, insightful narrator, and through his eyes, Joyland — which I suspect would appear a bit corny and shabby if we saw it on our own — appears to be a place of wonder and delight. The sensation of first love and first heartbreak are rendered with painful vividness, as is the simple pleasure to be found spending time in the company of good friends, walking on a deserted beach, or making a child smile.

My only quibble with this book is about the cover. Published by the Hard Case Crime division of Titan Books, the cover — with the tagline of “Who dares enter the FUNHOUSE OF FEAR?” — seems to promise a very different book than what Joyland actually delivers. The cover art is terrific — oh, that red-head in the little green dress! What horrors has she witnessed? Who is chasing her through the park? What did she photograph that’s so shocking? The problem is, none of these questions are relevant in the slightest, and the picture only has the vaguest of connections to the actual events in the book.

I’m no designer or artist (so be nice!), but I started playing around with old-timey amusement park photos, and I think either of these might do more justice to the actual story of Joyland: 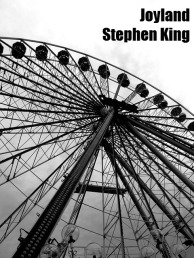 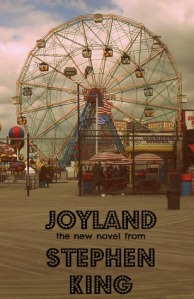 Sure, neither screams “Stephen King” at you — which the real cover surely does, in its own way. Still, I think I’d have liked this book a smidge better if my expectations were more in line with the reality of the book from the start. Joyland is not pulp fiction, and it’s not even that much of a crime story. It’s nostalgic fiction about the end of innocence and the farewell to first love; it’s about growing up and confronting life; and it’s about people and connections.