Question: How do you write a review for the sixth and final book in a series without giving away spoilers for the earlier books?

Tempest Reborn is the eagerly anticipated final entry in Nicole Peeler’s hip, funny urban fantasy series about small-town girl Jane True, who is definitely a lot more than she appears to be. When we first meet Jane in book one, Tempest Rising, she’s an introverted 20-something living in Rockabill, Maine, where she’s both ostracized and demonized for causing her high school sweetheart’s death — at least, that’s how the most vocal townies see it. Jane worries about her not-so-healthy father and works in the charmingly named Read It and Weep bookstore, has terribly low self-esteem, and escapes to the ocean for a swim whenever she needs a pick-me-up. Jane’s world is completely rocked, and forever altered, when she stumbles upon a murder and gets caught up in the investigation. The biggest revelation? Jane’s mother was a selkie, and Jane herself is considered a halfling — half human, half supernatural, with magical powers and gifts that she could never have imagined.

Over the course of the six books in the series, Jane learns more about the hidden supernatural world, develops her powers, finds deep and meaningful friendships and connections , and at the same time, becomes embroiled in supernatural scheming and politics, has her life endangered countless times — and  finds the love of her life.

Nicole Peeler’s writing is uproariously funny. Like, I laugh out loud when I read these books, and I am not easily prone to fits of LOLing when I read. Jane is hilarious, silly, loyal, blunt, and really rather adorable.  Some delicious little Jane-isms from earlier books:

I wasn’t running now so much as stumbling quickly, panting like a geriatric lion. (Tracking the Tempest)

That hair-pulling thing he did really peeled my bananas. (Eye of the Tempest)

They were paragons of conservative propriety in public, but in private they swung like pinatas. (Tempest’s Legacy)

Some heroes are born. Some are made. And some are bribed with promises of food and sex. (Tempest’s Fury)

In Tempest Reborn, all of Jane’s struggles and triumphs reach a climax, with danger and disaster lurking around every corner. Book #5, Tempest’s Fury, ended in one of the cruelest cliffhangers I’ve ever read — particularly in a series that generally leavens the deadly peril with big doses of hilarity. That ending! I think Jane True fans everywhere let out a collective shriek on the last page… and then we waited… and waited… for Tempest Reborn.

Tempest Reborn picks up immediately after that shocker of an ending, and proceeds to slam readers up and down and off the walls a few times in the first few chapters alone. This is a decidedly much less funny book, simply because Jane is dealing with calamitous events, and there’s precious little to smile about, much less indulge in out-and-out laughs. The stakes are higher than they’ve ever been, Jane is at the center of the ultimate power struggle, and her life and the lives of everyone she loves hang in the balance. And… I really can’t say more about the plot. Read the books, dammit!

Nicole Peeler has a remarkable gift for language, creating a texture and idiom in her narration and dialogue that’s easily identifiable as belonging to Jane’s world. And what a rich world it is! The author’s talents extend to an incredibly creative knack for world-building. The rules and intricacies of this supernatural society are superbly defined, so that we the readers absolutely know by the sixth book what it all means and where our beloved characters fit in.

Plus, it’s all just great fun. Memorable characters include Iris the succubus, Daoud the djinn (who seems to be able to pull any object he needs out of his magical pants), Caleb the satyr (who is pants-challenged), Nell the gnome, Anyan the incredibly hot barghest, and on and on. There’s royalty, there are rebels, and — check out the cover — there are even dragons.

As a fan of the series, I was completely satisfied by the dramatic conclusion to the story — and very appreciative of the epilogue (which, again, I won’t say anything about, because — spoilers!). I’m sad to see it all come to an end, but I’ve enjoyed every moment of reading this uproariously funny, sweetly romantic, and scorchingly sexy series. I can only hope that Nicole Peeler will choose to set more stories in this universe that she’s created — but whatever she writes next, I’m in. 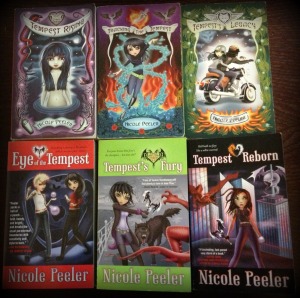