Book Review: The Theory of Everything by J. J. Johnson 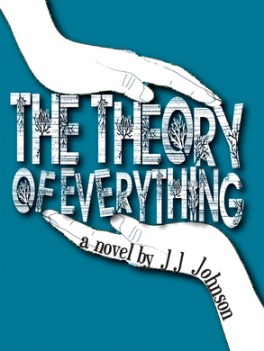 I stumbled across this sweet, sad young adult novel at my library, quite by chance, and just happened to take a peek inside. Once I saw the Venn diagrams, I was hooked!

The Theory of Everything is narrated by 15-year-old Sarah Jones, a typical teenager in many ways but one: Eight months earlier, her BFF Jamie was killed in a freak accident in the gym at school. Sarah, the only witness, was powerless to help or to save Jamie. Now, months later, it seems as though everyone’s patience with Sarah has worn thin. Shouldn’t she be over it by now? Sarah is lost, consumed by guilt and grief, and has been taken over, as she puts it, by the “snark box” that speaks for her, even when she knows snarkiness will only get her further into trouble.

Sarah’s parents are at wits’ end, her brother thinks she’s a freak, and her boyfriend, sweet and supportive Stenn, just wants her to open up and talk — but that’s the last thing Sarah wants to do. Instead, she skips classes, talks back, makes out with Stenn, and immerses herself in her nerdly pursuit of endless rewatchings of Star Wars and Battlestar Galactica. Sarah’s only true comfort comes from her loyal dog Ruby, but if Sarah doesn’t shape up soon, even Ruby may be taken away from her as her desperate parents search for some sort of leverage.

It may sound rather grim, but Sarah’s voice is honest and clear, and while she’s been through an awful tragedy, it’s hard not to feel a bit cheered by Sarah’s inner dialogue. Her snark box may be fully functional, but so is her wit, and Sarah’s approach to figuring out how to move forward often comes down to charts and diagrams, liberally scattered throughout the book.  We get plotted graphs of “Things Said To Parents & Likely Outcomes” (with outcomes ranging from stink-eye to counseling to jail), a pie chart on “Possibility that ghosts exist”, and a Venn diagram of “Things I Understand” (which includes chaos theory) and “Things I’ll Never Understand” (which includes “why Jamie died”). 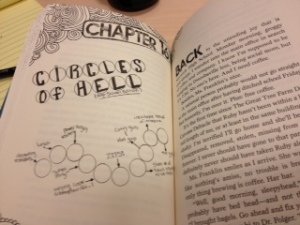 The Theory of Everything does not offer easy solutions, and that’s only fitting. Sarah has a long journey ahead of her, and while she’s making progress, there is no magic wand that will make her all better. What we see in this book is a girl in transition, coping with one of the most awful and unfair situations imaginable, and yet having to find a way to deal, simply because not dealing is not an option.

It’s interesting to me to think about how different readers might be affected by this book in different ways. I would imagine that a teen would completely side with Sarah, and would agree with her that her parents are being pushy and unreasonable. I could sympathize with Sarah and understand why she would feel this way. At the same time, as a parent myself, I can only imagine how terribly helpless Sarah’s parents must feel, watching their daughter go through such horrible turmoil and feeling desperate to reach her at any cost. It’s a tribute to the author’s gifted storytelling that both perspectives feel realistic. A tragedy like this would of course have ripple effects that spread and continue. The Theory of Everything lets us see one girl’s struggle to understand her loss and to find a way to continue a life that’s missing its center.

6 thoughts on “Book Review: The Theory of Everything”