Book Review: Revenge Of The Girl With The Great Personality by Elizabeth Eulberg 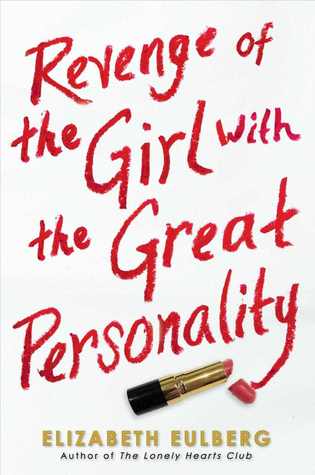 16-year-old Lexi has had it up to here. She spends every weekend acting as lackey to her younger sister Mackenzie at beauty pageant after beauty pageant. She works a part-time job to pay for basics while her mother spends thousands of dollars they don’t have on endless gowns and “necessities” for Mac. Her sister is turning into the world’s biggest spoiled brat. And to top it all off, she’s sixteen and has never had a date. She may be considered a Girl With A Great Personality, but is it too much to hope that a cute boy will take notice one of these days?

In this charming, engaging young adult novel, main character Lexi isn’t exactly unpopular — everyone likes her well enough —  but she’s not one of the Beautiful People at school by a long shot:

“In other words, I’m the girl that all the guys go to because, well, I’m the cool chick who they can talk to about the girl they really like.”

Lexi had it drummed into her head long ago that her sister got the looks in the family, so she has basically just stopped trying. She’s great at making people laugh, but her daily look at school is jeans, baggy T-shirt, ponytail, and no make-up. Ironically, Lexi’s dream in life is to study fashion in New York and pursue a career as a designer. She’s got a gift for clothes and wardrobe, but uses it to help everyone but herself.

Finally, on a dare from her best friend, Lexi decides to give glamor a whirl. She gets hair and make-up tips from an expert on the pageant circuit, puts on a dress, and voila! Suddenly, she’s turning heads, getting noticed, and getting boys. While Lexi basks in the glow of her new-found social success, she’s uncomfortable as well. The question remains: Should she have to be a different person in order to get people (boys) to like her? And if a boy who never gave her the time of day is now falling all over her, should she be flattered — or insulted?

Revenge is not just a book about a makeover. Lexi has it pretty tough in her home life. Her parents split up soon after Mac was born, and her mother’s emotional neediness has led her to unhealthy overeating, morbid obesity, horrible money management, and an obsession with pageants. Lexi’s dad is a benign absence; he means well, but just isn’t around. Lexi watches in growing dismay as her mother ignores past-due bills in order to buy new tooth covers (called “flippers” in pageant lingo) so that 7-year-old Mackenzie can have a smile just as perfect as all the other wanna-be beauty princesses.

It would have been easy, I think, for an author to take a preachy approach to this subject matter — beauty is only skin deep, beauty is in the eye of the beholder, blah blah blah. That’s all well and good, but that doesn’t help a teen girl who feels invisible every single day of her life. In Revenge, author Elizabeth Eulberg gives the reader (and Lexi) food for thought, but there are no pat, easy answers. Lexi really does feel better when she likes the way she looks. She really does have more confidence when she goes into school and people notice that she’s pretty. She seems to get a new burst of energy once she starts dressing herself with the same care that she puts into advising others on their fashion choices. And yet, she’s very much aware that the boy of her dreams never once saw her as a love interest until she changed her beauty routine, and that the party invitations only started coming her way once she changed who she was on the outside.

So should she have to change to be liked? Where’s the limit between making yourself feel good and remaking yourself to please others? If people only let you into their inner circles if they approve of your looks, is that circle really worth entering?

Lexi is a terrifically likeable main character. She’s smart, she’s funny, she’s a good friend, and she tries her best to make her mother see reason. Her home life is a disaster, and I couldn’t help but feel horribly sad for her. Lexi has to shoulder a burden that’s simply unfair for a girl her age, and she struggles through admirably, trying to find a balance between duty and protecting her own wants and needs. When a final disaster pushes her over the edge, Lexi decides to take a stand once and for all, and to say that there are fireworks is an understatement.

Revenge of the Girl With the Great Personality zips along, with plenty of quirk and humor to offset the sadness and pain that Lexi experiences. The writing is fast-paced and never dull, and the characters feels relatable and true to life. The biggest take-away message from Revenge seems to be that dressed up or dressed down, you have to be able to live with yourself and the choices you make. It’s not wrong to make changes to try to fit in better, if that’s what you want. The point is to be true to your own happiness, to your friends, and to your own sense of what quality of person you want to be. As Lexi puts it so winningly, as she confronts the school queen of mean:

“I have tried to be like you guys, to be liked by you. And say what you want, but I did it. You all didn’t have time for a loser like me unless I was entertaining you or doing something for you. So I guess deep down, we’re all losers who have something we want to cover up… We’re all the same. So you’re not better than me… You just like to pretend that you are. Why? To make you feel better about yourself.

So I can take off the makeup, but I’m still a good person… But there’s no such thing as bitch remover.”

I truly enjoyed Revenge of the Girl With the Great Personality. Great characters, convincingly told truths, and a plot with tons of zing — what’s not to love? Highly recommended for teen girls… and their moms, too.

3 thoughts on “Book Review: Revenge Of The Girl With The Great Personality by Elizabeth Eulberg”