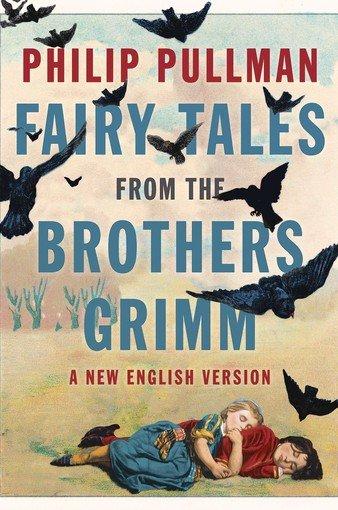 First of all, for those of you who have been following my struggles: I did it! I actually finished a book of short stories! I’ve mentioned a few times now that I have a big problem with story collections, and generally avoid them like the plague. I made an exception, however, for Fairy Tales From The Brothers Grimm by Philip Pullman, because a) fairy tales! and b) Philip Pullman!

And now that that’s out of the way… what can I tell you about this collection? We all — or at least, those of us above a certain age — grew up with the color-themed fairy books, right? I was a bit obsessed with these as a child, and read whichever volumes were available on my library’s shelves at any given book-bingeing visit. It’s been years since I’ve revisited fairy tales in the written form, as opposed to all the Disnified versions that I’ve watched countless times with my kids.

In Fairy Tales From The Brothers Grimm (let’s just call if FTFTBG for now, okay?), Philip Pullman presents fifty Grimm tales which he’s rewritten in modern, simple English. The language is straightforward and pure, without archaisms that abound in more “traditional” Grimm collections. At the conclusion of each story, the author includes source information as well as his own comments on the story itself and any changes he may have made from the original narratives. He is quite faithful to Grimm, identifying which edition of the Grimm stories he’s pulled from, and only deviates from the source material when he feels that the story is missing a connection or a conclusion.

Pullman’s comments vary from factual — stating source and context — to highly opinionated, and it’s these latter types of comments that are the most entertaining. When the author has something to say, he really says it. Here’s one of my favorites:

However, the tale itself is disgusting. The most repellent aspect is the cowardice of the miller, which goes quite unpunished. The tone of never-shaken piety is nauseating, and the restoration of the poor woman’s hands simply preposterous… Instead of being struck by wonder, here we laugh. It’s ridiculous. This tale and others like it must have spoken very deeply to many audiences, though, for it to spread so widely, or perhaps a great many people like stories of maiming, cruelty and sentimental piety. (Comments on story #21, “The Girl With No Hands”)

The introduction to FTFTBG is wonderful, outlining the history of the Brothers Grimm and their efforts to record and retell folk tales. Philip Pullman gives a very useful overview of common characteristics of fairy tales, among them the immediacy of the characters and narrative: The characters tend to have no backstory, and often lack names other than “the miller”, “the tailor”, “the youngest son”, etc. The stories are tales of actions and consequences, with little to no time spent on descriptions of settings or the natural world, character motivations, or personal growth or development:

There is no psychology in a fairy tale. The characters have little interior life; their motives are clear and obvious. If people are good, they are good, and if bad, they’re bad… The tremors and mysteries of human awareness, the whispers of memory, the promptings of half-understood regret or doubt or desire that are so much part of the subject matter of the modern novel are absent entirely.

I am not an academic; I have no fancy degrees in folklore, ethnography, or comparative literature. I can’t compare Philip Pullman’s retellings to other versions, reinterpretations, or new translations. What I can assess is how this particular collection of stories worked for me as a reader — and the answer is, it worked very well indeed!

I truly enjoyed this collection, which includes both familiar tales (“Cinderella”, “Rapunzel”, “Snow White”, “Little Red Riding Hood”) as well as tales (with wonderful titles!) that I’d never heard of, such as “Hans-my-Hedgehog”, “The Mouse, the Bird and the Sausage”, and “The Singing, Springing Lark”. Even for the most familiar tales, I was surprised to realize how far my own memory of the stories had strayed from the Grimm version into the land of Disney princesses and happily-ever-afters. There’s something oddly appealing — at least to me, with my appreciation for the dark and off-beat — in realizing that even a story that ends with kisses and marriage (such as “Cinderella”) also includes self-mutilation, horrific cruelty, and shoes filled with blood. In real Grimm stories, fairy tales are definitely not soothing stories to lull children into peaceful dreams!

Some of the stories which were new to me were quirky and funny, such as “The Boy Who Left Home to Find Out About The Shivers” and “Lazy Heinz”. Then again, there are plenty of truly disturbing stories. “Thousandfurs”, for me, is the most disturbing in the collection, not specifically because of Pullman’s retelling, but because “Thousandfurs”  is one of the origin stories for the brilliant yet wildly upsetting novel Deerskin by Robin McKinley.

And perhaps that’s the point and the beauty of reading such a well-written and thoughtful collection of traditional fairy tales: We’ve all encountered these stories in so many ways, with so many different interpretations. In reading them anew, we’re instantly reminded of all the associations we’ve developed with these stories, from reinterpretations in modern novels to our grandparents’ versions of fairy tales as bed-time stories to cautionary tales about greed and duplicity. What’s most interesting to me is that the stories resonate so deeply and so widely; your Rapunzel and my Rapunzel may be very different, but the bottom line is that fairy tales like these give us a common language and cultural points of reference. On my bookshelf, I have a wonderful collection of short fiction by women writers entitled We Are The Stories We Tell. Given the depth of experiences we all share thanks to fairy tales such as those in FTFTBG, I’d say that we are also the stories we read.

3 thoughts on “Book Review: Fairy Tales From The Brothers Grimm by Philip Pullman”