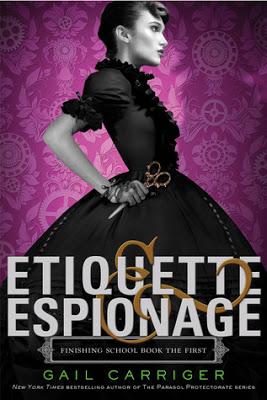 Steampunk authoress extraordinaire Gail Carriger, who made the reading world a better place by introducing us to the wonderful world of The Parasol Protectorate, now steams ahead with a new young adult series, The Finishing School.

“Book The First” in the new series is Etiquette & Espionage, in which we meet 14-year-old Sophronia Timminnick, the somewhat unruly and definitely unfinished daughter of a large country-dwelling family. Sophronia is prone to mischief and misadventure, largely due to an unbridled curiosity and an unwillingness to let fashion and manners dictate her every move. Within the first chapter, Sophronia is recruited into Mademoiselle Geraldine’s Finishing Academy for Young Ladies of Quality, which takes a very select few girls for “finishing”.

And what a finishing school it is! Housed in a huge dirigible which floats over the moors, Mademoiselle Geraldine’s teaches girls not only how to curtsy and flutter eyelashes, but the finer points of misdirection, covert operations, knife and poison skills, and all the other necessary knowledge of a first-rate intelligencer.

There’s action galore amidst the comedy of manners, as well as an array of mechanical wonders including clockwork maids and butlers that run on tracks and a rather adorable little dachshund-like mechanical dog (a “mechanimal”) named Bumbersnoot. Much of the plot revolves around Sophronia chasing around after a secret prototype that’s drawn the attention of a variety of baddies out to steal it, in between which Sophronia explores the out-of-bounds areas of the school, makes unlikely friends, and learns to appreciate the finer nuances of appropriate dress and accessories.

It’s all quite clever and tongue-in-cheek, with much the same spirit as the Parasol Protectorate books. The Finishing School series is set in the same world as The Parasol Protectorate — a steampunk-ish version of England, in which vampires and werewolves are a part of society and the pursuit of scientific knowledge is often cause for nefarious crimes and plots. The Finishing School takes place about 25 years before the events in The Parasol Protectorate, but still, a nice variety of familiar faces pop up in Etiquette & Espionage, and I’m hoping that a certain burly, ill-tempered werewolf will make an appearance in one of the future volumes.

Gail Carriger shows her usual flair with character names, which in this book include Mrs. Barnaclegoose, Dimity Ann Plumleigh-Teignmott, Agatha Woosmoss, and the roguish Lord Dingleproops.

Overall, while cute and entertaining, I wasn’t enthralled by Etiquette & Espionage, which disappoints me as I’d had this one on preorder for months, based on loving Soulless and the rest of the Parasol Protectorate books so very much. The tone of E&E struck me as a bit juvenile, more middle grade than young adult. The opening chapter’s set piece is Sophronia’s misadventure in a dumbwaiter, ending badly with a trifle flying through the air and landing on an indignant woman’s hat. From there, the book continues with a great number of adventures and mischief, but I never felt that there was much at stake, despite what are intended to be a few menacing sorts trying to cause trouble.

While The Finishing School is marketed as a young adult series, Sophronia, at age 14, seems a big young and green to anchor a series whose intended audience is teens. I’m assuming that Sophronia will grow up during the ensuing volumes of the series (perhaps à la Harry Potter and his seven years at Hogwarts). I’m hoping that as Sophronia ages during the remaining three books in The Finishing School, the maturity level of the storyline will age with her.

That said, I’m sure Etiquette & Espionage will be a big hit with Gail Carriger’s goggle-and-top-hat-wearing fans. I’ll be curious to see how it fares with the young adult audience, who most likely are not familiar with the quirky delights of the world featured in the adult Parasol Protectorate books. Etiquette & Espionage is a promising beginning, but to hold my attention, I’d like to see the next book take on a little more depth and move beyond E&E‘s flavor of madcap adventure into something with a bit more substance.