When Jamie is bitten by a venomous snake, Claire fears she may not have the resources to save him. Jamie asks Roger to complete an important task in the event of his death.

The menfolk of the Ridge go out on a hunt, then split up into groups to track a herd of buffalo. Roger and Jamie pair up, and Jamie is bitten by a snake. It appears to be venomous, and Jamie becomes ill very quickly. Roger attempts to go for help, but the others are too far away. They have no choice but to make camp for the night and try to return by daylight.

Jamie’s condition worsens, and he believes he’s going to die. He asks Roger for last rites, which Roger says he doesn’t know, and in any case, that Jamie doesn’t need them. He offers Jamie a prayer for the sick, but Jamie scoffs since it’s not in Latin. As long as he keeps his sense of humor, he can’t be too badly off, right? Jamie makes Roger promise two things in case he (Jamie) dies: To kill Stephen Bonnet, and to make sure Claire goes back to her own time, along with Roger, Bree and Jemmy, if possible.

In the morning, Jamie’s condition is bad, but he’s still alive. Roger begins hauling him back to the Ridge, but luckily, Ian and Fergus find them and help get Jamie home. 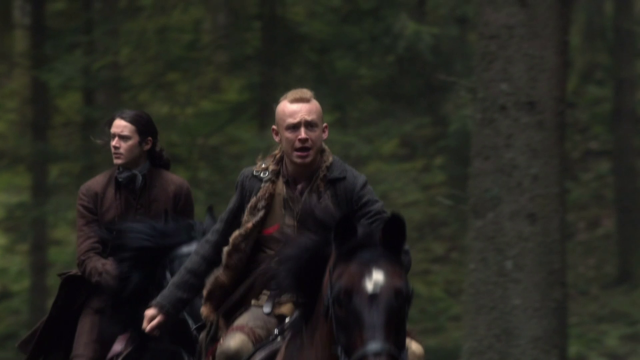 Jamie’s leg looks bad. His body has fought off the venom, but his wound is infected, and even an application of maggots can’t get rid of all the infection. If only Claire’s syringe hadn’t been broken by that rotten Brown brother last episode!

Claire knows that she may have to amputate the leg to save Jamie’s life, and he tries to force her to promise not to do it. Ian scolds Jamie harshly, asking if Ian Sr or Fergus were any less brave or honorable for having lost limbs to amputation?

Finally, Jamie gives in and gives Claire permission to amputate, but engineer Bree rushes in to save the day. She’s made a syringe from the fang of the snake that bit Jamie, and Claire is able to use this to inject Jamie with penicillin. All is right with the world!

There are some great moments in this episode. Early on, we get a tender moment as Claire gives Marsali a prenatal check-up and Marsali confides how glad she is to have Claire with her, both as a doctor and as a mother. Sweet! Of course, when the time finally comes, Claire has her hands full with Jamie and Marsali goes into fast labor out in the woods with Fergus and their two kids… let’s just assume she made it back home and didn’t deliver right then and there.

We also get an important scene with Claire and Brianna, talking about finding their callings. Claire knows she was always meant to be a doctor, and whether called a healer, a nurse, or even a witch, her life will always have meaning so long as she can continue to practice medicine. Brianna is concerned about both herself and Roger and what they might do with their lives. Claire reassures Brianna that she’s meant to be an engineer, and that it’ll be up to Bree to figure out what that looks like for her in the 18th century.

I loved Roger and Jamie’s time together, each showing their depth of caring and respect in their own way. And in all the drama of the episode, it’s almost easy to forget the opening scene, when Jamie comes to the cabin to fetch Brianna for the hunting trip and basically walks in on Roger and Bree in bed together. Little Jemmy was adorable too.

And not too quibble or be ungrateful for a beautiful episode… but apparently the show has decided that Roger is just perfectly okay and has no lasting damage from the hanging? Alrighty then. I mean, strange choice, but okay.

Claire was simply stellar in this episode. She tends to Jamie as a physician but also as the woman who loves him, and feels the absolute crushing weight of her impending decision. I don’t for a minute believe she’d allow Jamie to die rather than amputate his leg, no matter what she promises him, but she also knows that if she does it without his consent, he may never forgive her. The moment when he appears to be dying and Claire wraps herself around him and begs him to stay with her… oh my. Waterworks.

This was such a well-done episode. Maybe I loved it so much because it does what the best Outlander episodes do — show us the hearts of the people involved and the depth of their relationships.

So much of season 5 has focused on externals — the Regulators and the Governor and the battles and militia. Here, in episode 9, we’re tightly focused on the Fraser family and their life at the Ridge, and it’s a beautiful thing.

More of this, please!

And yet… it’s sad to realize that suddenly the season is starting to near the end. Only three more episodes to go!