The Frasers must come to terms with all that has changed in the aftermath of the Battle of Alamance Creek. Brianna tries to help Roger overcome the trauma he has endured. An unexpected visitor arrives at the Ridge.

This is going to be another relatively short reaction post — because how much more is there to cover beyond ROGER IS ALIVE and IAN IS BACK(!!) ?

Okay, digging in a bit more…

We open with a scene at Oxford in 1969, which Roger is leading a classroom discussion in his role as professor. Damn, he’s good. As the class discusses “famous last words”, Roger’s students press him to say what he would want his own last words to be. He finally shares:

Let history forget my name, so long as my words and my deeds are remembered by those I love.

We cut back to the 18th century, but the show makes the strange stylistic decision to show the hanging and its immediate aftermath in the style of an old silent movie. It’s a weird choice. Yes, we’re supposed to be experiencing this through Roger’s traumatized perspective, but I don’t know. It just didn’t work for me.

In any case… by freeing his bound hands moments before the hanging, Roger is able to get a hand in between the rope and his neck just enough to keep his airway open, and when Jamie goes to cut Roger down, he discovers that Roger is still alive. Claire performs emergency field surgery to get him breathing. Everyone should be happy, right?

Unfortunately, Roger is suffering severe PTSD. Three months later, while healed physically, he’s withdrawn and noncommunicative, not even willing to try to speak. His voice will never be what it was, but he should be able to talk a little, at least. It’s not until Jemmy is about to touch a hot kettle that Roger vocalizes at all, shouting to protect Jem… but Brianna’s delight is short-lived, since Roger still won’t talk.

Bree is feeling sad and desperate, wondering if she’ll ever get Roger back. Claire explains about “shell shock” to Brianna, which helps her understand a bit more what Roger may be feeling. 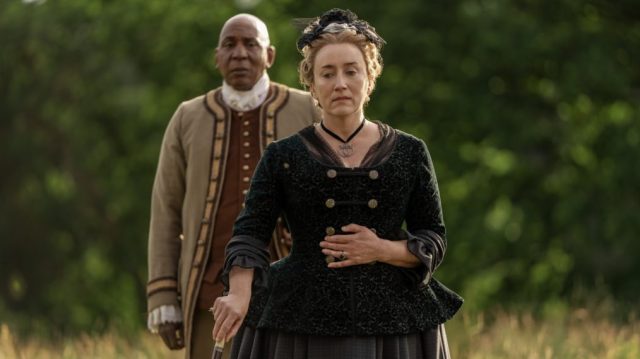 Meanwhile, Jocasta comes to the Ridge to visit Murtagh’s final resting place, and she and Jamie share fond words and tears.

And later, Jamie and Claire and Jem are playing hide and seek in the woods (ooh, aren’t Jamie and Claire fun grandparents) when a wild boar comes at them. The boar dies instantly from an arrow shot by a Mohawk up on the hill — who turns out to be Young Ian. Yay for Ian’s return! In book #5, he doesn’t show up until much later, but I’m happy to have him back. His hair is kind of silly looking, but I’m loving the dots tattooed on his face. Ian is very reticent, not offering any explanation for why he’s back or what he’s experienced (despite Marsali’s best effort to get him talking. I love Marsali to pieces).

As a “so sorry I nearly killed you” consolation prize, the Governor has granted Roger 5,000 acres of backcountry land, and Roger and Ian go out together to survey the property. It’s a healing trip for both men, as both have to find reason to live.

When Roger returns, he’s finally ready to try to talk again. He and Brianna reunite, although he explains that he’s not the same person he was before.

I just didn’t love this episode. The silent movie effect didn’t feel necessary to me — I felt like it was trying too hard to be artistic, and it took me out of the emotion of the episode.

Not to be too nitpicky, but I believe Claire says early on that Roger doesn’t have a scar (or barely has a scar) — and maybe it’s easier for the costume and makeup folks this way, but book Roger bears a very noticeable and obvious scar across his throat for the rest of his life. It’s yet another thing that marks Roger as an outsider, making him an obviously hanged man wherever he goes.

As I mentioned, I do love Marsali. She just brightens up every scene she’s in, and she had a few good ones this episode.

But it is great to see Young Ian back, and I’m eager for him to start sharing his story with Jamie and the family.

And yay for the family fur babies! We got both Adso and Rollo in this episode, so I consider that a win!