The Regulator Rebellion reaches a boiling point, forcing Jamie to face his fear and confront the consequence of his divided loyalties.

I’m going to keep this brief, because my brain is absolutely fried this week! 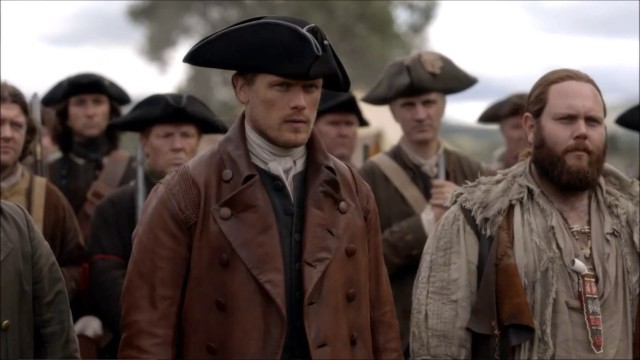 The 7th episode of season 5 focuses exclusively on the Batttle of Alamance Creek, fought between the Governor’s troops and the rebel Regulators. As Bree explains in her hasty history lesson, this battle is later seen as a precursor to the War of Independence. For now, Jamie and Claire are on the government’s side, but they know they’ll have to switch soon.

Poor Roger! He has no business being a soldier. He’s an Oxford history professor! He never handled a gun in his life before traveling to the past, and now he’s a militia captain? He’s doing what he must for his family, but geez, do I wish he and Brianna had had the good sense to get the hell out of there by now.

And hey, it’s Jamie’s 50th birthday! May we all be so blessed to look that good at his age! He and Claire enjoy a tender, loving morning in bed before the battle arrives. Jamie later invokes the spirit of his late uncle Dougal MacKenzie, the warrior who taught him all he knows about battle and whose side he fought beside so many times.

You’d think Claire and Jamie would understand by now that they can’t change history — but Jamie still has to try, for the sake of saving Murtagh. Roger delivers the message and Murtagh declines to leave before battle, but Roger would have made it safely back to Jamie’s camp most likely had he not had the misfortune of running into his ancestress Morag Mackenzie, whom he’d saved (in the previous season) on board Stephen Bonnet’s ship. He tries to warn her away from the battle and offers her and her family a refuge on Fraser’s Ridge. But when he embraces her, her husband shows up and beats the hell out of Roger. (And good job, show, for bringing back the amazing Graham McTavish as Buck Mackenzie! With a full head of hair! Nice touch of casting, indeed.)

Well, things are not good. Jamie is forced into wearing the red coat of a British officer, which is just not a feel-good moment for him, considering that these coats represent the enemy in so many of his life’s worst times. As the battle progresses and the slaughter begins, Jamie finally encounters Murtagh in the woods, but Murtagh is shot protecting Jamie. In his last heroic act, Murtagh stayed true to his vow to Ellen Mackenzie Fraser to always protect her son. Murtagh is dead before Jamie can get him to Claire. It’s so damned sad.

Roger still hasn’t come back. Jamie has heated words with the Governor, disgusted by all the needless death, and throws down the coat and renounces his military role. The Frasers go looking for Roger, and eventually come upon a tree where some Regulators have been hanged for treason. Jamie recognizes one man, despite his face being covered. It’s Roger!

So wow. Not an upbeat episode at all. It’s always great to see Claire in full doctor mode, and I wanted to punch whichever awful Brown that was who deliberately crushed her one and only syringe of penicillin.

My heart was busy aching preemptively for Roger and Brianna. Having read the book, I knew what was coming. I also know what happens after the cliffhanger ending, but I’m not telling!

I really did love seeing Graham McTavish again! So clever to cast him as a nasty Mackenzie.

And poor Roger! He should have known better than to hug Morag. I mean, HE knows that she’s his many-greats-great-grandmother, but she and her husband don’t. And while I don’t think he deserved what happened, he should have had the sense not to act so intimately toward another man’s wife, no matter how innocently intended.

I was surprised by Murtagh’s death. As we all know, his character dies at Culloden in the books, so any role for him past season 2 is new and different for the TV series. TV Murtagh was a fantastic character, but I didn’t love his role as Regulator leader. It just didn’t seem to fit him, and it led directly to his death. So what was the point of keeping him alive until now? I wish he’d had more time to live happily on the Ridge with Jamie, but I guess it wouldn’t have had enough drama that way. Jamie’s heartbreak over Murtagh’s death was incredibly well done.

And now, it’s two weeks until the next new episode… two weeks of dreading the outcome of that horrible last scene.