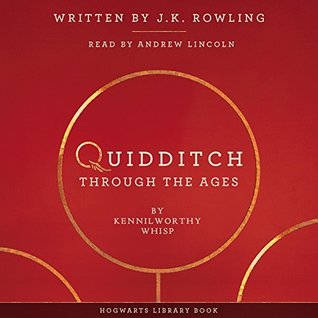 A perennial best seller in the wizarding world and one of the most popular books in the Hogwarts School Library, Quidditch Through the Ages contains all you will ever need to know about the history, the rules – and the breaking of the rules – of the noble sport of Quidditch. Packed with fascinating facts, this definitive guide by the esteemed Quidditch writer Kennilworthy Whisp charts the game’s history from its early origins in the medieval mists on Queerditch Marsh through to the modern-day sport loved by so many wizard and Muggle families around the world. With comprehensive coverage of famous Quidditch teams, the commonest fouls, the development of racing brooms, and much more, this is a must-have sporting bible for all Harry Potter fans and Quidditch lovers and players, whether the weekend amateur or the seasoned Chudley Cannons season-ticket holder.

Narrated by Andrew Lincoln, this is the first audiobook edition of Whisp’s book ever to be released

I read the Hogwarts schoolbooks ages ago, and thought they were good silly fun, if a bit inconsequential. BUT, when I heard that Pottermore was releasing an audio version narrated by Andrew Lincoln (Rick Grimes, yo), I was all in.

Rick is an avid Quidditch fan.

So was it worth it?

Well, yes. Clearly, this is a fans-only book for Potter-philes. A passion for the Potter-verse is required! An interest in the minutiae of Quidditch play might be helpful too. The book itself covers the history of Quidditch, modern teams, Quidditch equipment, the evolution of the racing broom, and famous (or infamous) examples of unusual World Cup tournaments.

The audiobook includes material not found in the original printed edition, but (I believe) available via the Pottermore website — coverage of the 2014 Quidditch World Cup, as told by the Daily Prophet’s sports reporter Ginny Potter, with occasional social commentary from gossip columnist Rita Skeeter. The Skeeter bits are particularly funny; Ginny’s coverage of EVERY SINGLE GAME in the tournament, which initially amusing, gets old really fast.

This was a good, fairly entertaining companion on my daily commute. Definitely doesn’t require much concentration! It’s a bit long for what it is — the concept wears out its novelty pretty early on. Also, the production includes sound effects (all sorts of whooshes, as if Quidditch players are zooming by… constantly), which I found annoying, but a less grumpy listener might find these amusing.

All in all? A fun listen, not essential, but not a bad choice for escapist fare while your mind is mostly elsewhere.

Worth noting: Proceeds from Quidditch Through the Ages benefit Comic Relief and the Lumos Foundation. It’s always nice to support a good cause while indulging Potter obsessions!

2 thoughts on “Audiobook Review: Quidditch Through the Ages”