Season 3 is here! My intention is to write an “Insta-Reaction” post for each episode soon after viewing, to share some initial thoughts, questions, reactions — you name it.

Brianna grapples with life-changing revelations and Claire must help her come to terms with the fact that she is her father’s daughter. Roger brings news that forces Claire and Brianna to face an impossible choice.

This episode is 99% Claire — the focus is on her life in Boston following her return from Scotland, her relationship with Brianna, and the decision she must make about whether to attempt to return to Jamie again.

This was, by necessity, a slower episode — especially relative to the previous four, with their emphasis on Jamie’s travails post-Culloden. Here in 305, the drama is mostly internal. It’s all about the choice facing Claire — a choice she never really believed she’d have to make. 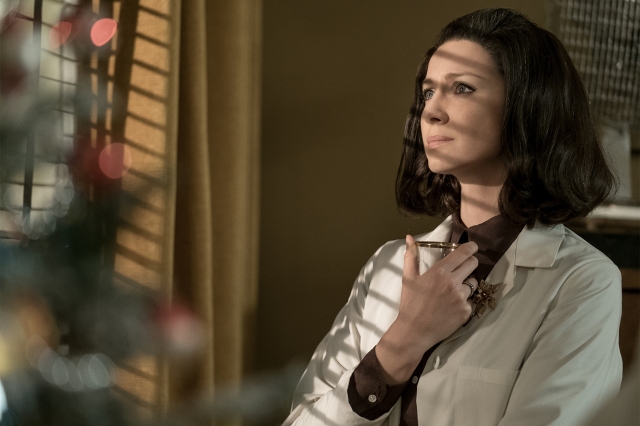 On the one hand is the man who still haunts her every waking moment. It’s been 20 years, but she’s never forgotten or stopped loving Jamie. But until Roger shows up with his new proof, the idea of actually seeing Jamie again was just a dream, not a real possibility.

And of course, on the other hand, there’s Brianna. Can Claire make a decision that will result in probably never seeing her daughter again? Claire has a powerful, touching conversation with Brianna about all she’ll miss — seeing Brianna marry and walking her down the aisle, being a grandmother to Brianna’s children — and simply being a part of her daughter’s life.

Brianna is a young woman who’s been through a lot in the past year, losing the only father she knew and finding out the truth about her real father, and now faces losing her mother as well. She handles it with grace and poise. She NEEDS Claire to go, to find her father and make sure he knows that he has a daughter. Brianna still isn’t fully formed as an adult, but she insists to Claire that it’s time. Brianna will be okay — now it’s time for Claire to find Brianna’s father.

The scene at the ceremony for Frank struck me as a bit unnecessary. Why bring Frank’s mistress back into the story? She accuses Claire of selfishness, of refusing to let Frank go when he could have had years of happiness with someone who really loved him. Now, we know that Claire did offer Frank a divorce after the debacle the night of her graduation. So why force this scene now?

In thinking about it, it ties in with the scene earlier in the episode in Brianna’s history classroom at Harvard, when the professor discusses Paul Revere, then talks about the difference between historical facts versus what gets passed down through time. History depends on whose version we’re hearing. So back to Frank — did he tell the other woman that he’s the one who chose to stay in the marriage? Perhaps her version of history feels real to her, but it’s based on her source, who didn’t share all the information with her.

And speaking of Brianna’s history class… The professor informs Bree that she’s failing the class. Bree suggests that she’s just not smart enough, which is nonsense. Before Frank’s death and the trip to Scotland, she was an outstanding student. Clearly, Brianna has been through some life-altering events. As she sits in class, she’s drawing sketches of campus architecture rather than taking notes on the lecture, and later, giving Roger a tour, she becomes animated talking about the intricacies of the building’s design. Brianna is a history major, following in her father’s footsteps, but this is a clue that her true passion lies elsewhere. It’ll be interesting to see how much more of Brianna we see this season, and whether her career/education path gets more attention.

Roger, as always, is a sweetheart. He’s so awkwardly romantic with Brianna, and he cares for Claire so much. It’s not just the historian in him that gets him to keep digging for Jamie when it seemed they’d hit a dead end. Roger is now entangled in the story of Claire and Jamie (and Brianna), and he doesn’t want to let go of the connection.

And finally, after soul-searching and conversation upon conversation, Claire decides to go. She makes herself an 18th-century-appropriate traveling outfit with lots of hidden pockets so she can store her penicillin, syringes, and other 20th century must-haves (the show calls it her Batsuit!), and she’s ready to go.

Claire says goodbye to Brianna and Roger in Boston. It would be too hard to have Brianna with her at the stones — perhaps she wouldn’t have the strength to really leave her. And next we see, she’s in Edinburgh!

Finally, finally, we get the start of Claire and Jamie’s reunion. There’s absolute joy on Claire’s face as she finally sees Jamie working at the printing press. And then Jamie hears her voice! He freezes, slowly turns and sees her, and then passes out! Well, naturally — Claire has been on a journey back to Jamie for months, but Jamie has had absolutely no warning. It’s taken him 20 years to come to terms with losing Claire and rebuild a life for himself, but he never expected to actually see her again. And then there she is, suddenly, standing in front of him! Fainting dead away is a reasonable response, given the situation.

And…. fade to black! That’s the end of the episode. Oh, it’ll be a long, cruel couple of weeks until we see what happens next, but we can be sure that good things are in store for Claire and Jamie!

Another strong episode for a fantastic season. I can already imagine that there’s some grumbling going on among fans who can’t stand being Jamie-less for a full episode (or thereabouts), but anyone who’s read the book knows that we’d caught up to as much of Jamie’s life as we could expect to see as of the end of last episode. Yes, there are still some years to cover, but we’ll find out more about those when Claire does. Meanwhile, knowing that he’s a printer in Edinburgh is all that was truly important for the sake of getting Claire to finally go to him.

I’m glad that the show took a shortcut along the way, showing Claire stepping out of the taxi and into 18th century Edinburgh. We didn’t really need to see her arrive in Scotland, go to Craigh na Dun, travel through the stones, then find transportation to Edinburgh. We know that’s what happened without seeing it on screen. A book can take the time to show every detail, but in this visual medium, with a limited amount of minutes per episode, it was more important to get Claire to her destination than to spend time on the journey — especially since we’ve seen her go through the stones twice now, and Geillis once. We know how it works, so the show was right to get straight to what matters most, bringing Claire and Jamie together.

Thinking about the stones and time travel for a moment more, it’s lovely to think about the differences in Claire’s journeys. The first time she went through, it was purely by accident. She made no decision, but was pulled through without knowing what was happening. The second time, she went through the stones to save her child. It was deliberate, but done very much against her will and desire, and felt like the end of her real life. It was a moment of despair and heartbreak, from which Claire never truly recovered. How lovely, then, that Claire is owning her life and destiny here by choosing the stones this time. She’s fully cognizant of what she’s leaving, and makes the decision to go back in time in order to consciously choose a life with Jamie. Such a beautiful testament to the love she feels for him and its power.

On a different note, I enjoyed the scenes showing Claire and Joe Abernathy*. They’re colleagues, but also friends — probably the only friend Claire has. Claire tells Joe a partial truth about Jamie — that he was her true love and Brianna’s real father, and that she may have a chance to reconnect with him. Joe is supportive and enthusiastic (yet another person pointing out to her that no one really bought the fairy tale that she and Frank were happily married). Joe offers Claire reassurance that she’s still attractive.

*Side note: It’ll seem odd and unimportant to anyone who hasn’t read the books, but the scene with the skeleton in Joe’s office isn’t just a throwaway. It may seem weird in this episode, but there’s a reason to include it. ‘Nuff said.

It’s odd to see poised, careful Claire showing this type of vulnerability, wondering if Jamie will still want her now that she’s 20 years older. I was a little disappointed by her deciding to cover up her gray hair before leaving for Scotland. What will she do when the roots grow back in? Can she make a hair dye from acorns or something? Still, this too shows the internal fear which she hasn’t shared with Brianna. She knows she’ll always love and want Jamie, but she really doesn’t know what his life has been like over the past 20 years. Will he still want her, love her, or have room for her in his life? She’s stepping out into the unknown with no guarantees at all. I suppose I can understand her doubts and fears, as she looks at her gray hair and (completely unnoticeable) wrinkles. (Wouldn’t we all love to look like Caitriona Balfe as we age??) And this highlights how truly brave she is. It’s not just the danger of the time travel and the uncertainties inherent in the passage through the stones. Even if all goes according to plan and she finds Jamie, she really has no idea what he’ll be like and whether she can restart a life with him.

And she goes anyway. Like I said, that’s bravery — and love.

Oh, the cruelty of whoever puts together the Starz calendar! We now have a two-week wait for the next episode, which means we won’t see the Claire and Jamie reunion until October 22nd. How shall we bear it?