The 2nd season of Outlander is entering the home stretch. I’m writing an “Insta-Reaction” post for each episode right after viewing, to share some initial thoughts, questions, reactions — you name it.

Claire and Jamie reunite with the Lallybroch and MacKenzie men as they train. Jamie’s power struggle and Claire’s personal battle weigh upon them, but new information comes when an Englishman pays a visit to their camp.

It’s all quite rosy to start with. The Scottish scenery is beautiful, as always. There are smiles and hugs all around as Jamie and Claire arrive at the main camp and are reunited with the Lallybroch contingent, headed by Murtagh. Wee Fergus is adorable as always and has a lovely little greeting for “milord” and “milady”. It seems like quite a happy reunion at first with the MacKenzie men, as Claire delivers kisses on the cheek to Angus and Rupert. Dougal is there as well — turns out that it’s just the three of them from the MacKenzie clan, as Colum is sticking to his decision to stay out of things. Even young Willie seems to have committed gross betrayal by getting married and moving to Ireland.

Jamie and Murtagh quickly realize the sorry state of their “fighting” men, who are largely farmers armed with pitchforks and old swords. Dougal is all for pushing on towards Prince Charles’s camp — he wants to make sure they’re ahead of the game in terms of grabbing a seat at the prince’s table. Jamie isn’t having it. He insists that the men need to be turned into soldiers first. This isn’t a cattle raid; they’ll be marching into battle against highly trained British soldiers armed with muskets and cannon, and need to know how to fight together if they have any chance of success. 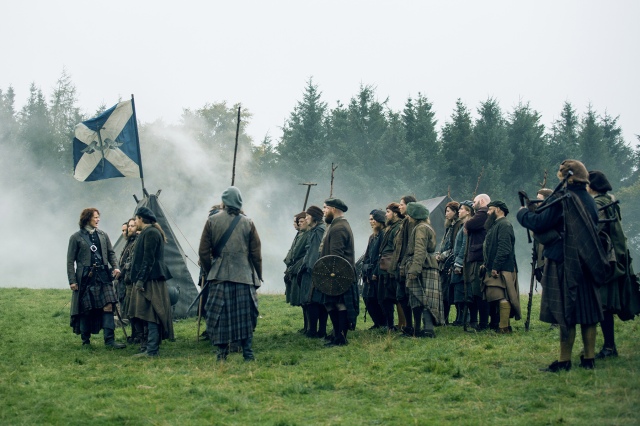 Dougal and Jamie’s power dynamic here is very interesting. Dougal tries to assert himself as more knowledgeable and better able to lead, but Jamie does not back down. He’s not on MacKenzie land anymore and doesn’t owe Dougal anything. Jamie basically tells Dougal to fall in line or leave, and Dougal seems to comply… although not without a slimy scene with Claire where he tries to strong-arm her into supporting what he wants. Claire tells him to f*ck off, so go Claire!

Dougal manages to disrupt Jamie’s careful, disciplined training session by staging a Highland charge. It’s the old ways vs the new ways, and Jamie puts Dougal in his place pretty quickly… but Dougal sure does look good wearing just a kilt and plenty of mud.

Claire’s situation is intense, yet makes perfect sense. Although Jamie fought as a mercenary in France years earlier, Claire’s really the only one present who fully understands the horror of war. As she sees the men train, laugh, complain about the food, and deal with the mundane details of army life, she’s brought back again and again to her experiences as a battlefield nurse during World War II. She know only too well that the young men who share a light-hearted meal may very well end up as cannon fodder. When she finally has a complete breakdown, Jamie wants to send her back to Lallybroch where she’ll be safe and away from the battle, but she refuses. What Claire cannot abide is being helpless and alone. She’ll stick with Jamie no matter what and do what she can to keep trying to rewrite history. 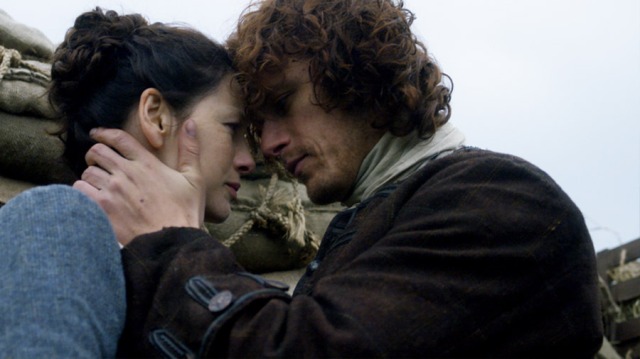 Lord John!!! Well, he’s not really known as Lord John here, but book readers know and love this character. As in the book Dragonfly in Amber, a young British lad sneaks into the Highlanders’ camp and tries to attack Jamie. He’s just a teen, but shows a lot of courage, even if it’s pretty foolishly carried out. He refuses to talk, even under threat of torture, until Claire puts on an act, pretending to be a captured Englishwoman being held prisoner by these Scottish barbarians. In order to protect Claire’s honor from the ravishing of the Scottish captain (ha!), the boy gives his name, William Grey, and gives all sorts of helpful details about the nearby British camp. 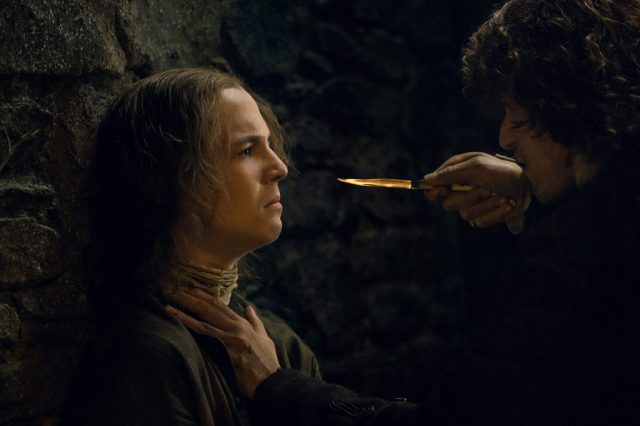 Side note: There’s actually a small change from the book that I quite approve of. In the episode, it’s Claire’s own idea to pose as a captive in order to get the boy to talk, whereas in the book, Jamie initiates it, going so far as to rip open Claire’s dress and fondle her in front of everyone. She gives him a well-deserved slap afterward, as I recall, as she really does not appreciate being manhandled this way, even if it’s ultimately for a good cause. So kudos to the show for giving Claire her own power here!

What else? Well, there’s quite a bit of punishment by lashing in this episode. First, two men who fail at their sentry duties are given six lashes each, by Jamie’s command and delivered by Murtagh. Later, Dougal’s men are responsible for letting William Grey into camp, and they are to be lashed as well — but so is Jamie. Jamie declares that it’s his own failure, because the boy saw their unshielded fires which led him toward them in the first place, so Jamie insists that he take a punishment as well. Hey, any excuse for a shirtless Jamie, I guess.

Claire and Jamie are affectionate and close. I always end up taking the temperature of their relationship each episode, and they seem to be right where they should be. There are a lot of little touches and caresses, and Jamie is very in tune with the nuances of Claire’s behavior, noticing that something is wrong way before she’s ready to admit it and talk to him about her battlefield trauma. They’ve clearly resumed their hot and steamy sex life, and even though they didn’t have time for it what with all the battle prep, they seem to be back on track.

I couldn’t help feeling a sense of looming sorrow watching this episode. There’s an innocence to Jamie’s preparation of the men and the excitement that they feel. As we watch a training montage, which shows the progress they’re making, I was still overwhelmed by the fact that history isn’t going to change, and no matter how hard Jamie tries, he’s still marching a group of ill-prepared civilians into a war against a professional army, completely outmatched in terms of numbers, weaponry, and abilities. It’s horrible to look at all of the Highlanders here and know the destruction that they’ll be facing.

Jamie is back in his dad’s coat! Jamie wore his father’s leather coat back in the first season when he was resuming the role of Laird of Lallybroch, and in this episode, it seems to denote his leadership role. It’s a great bit of continuity, as well as a symbol of Jamie taking on responsibility in a way that he associates with his own father. 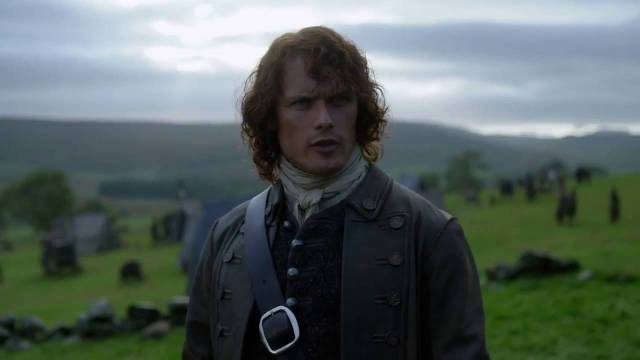