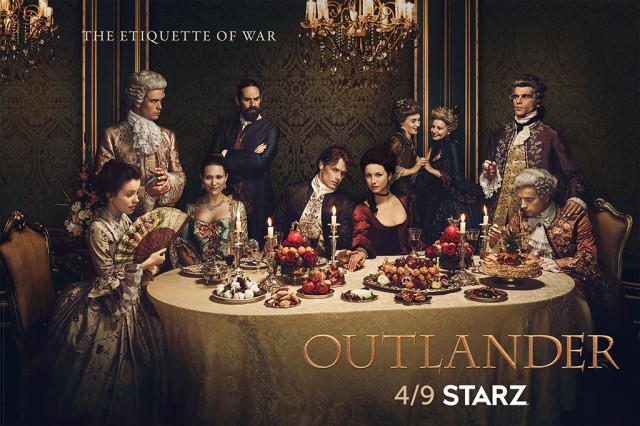 Season 2 has begun! My intention is to write an “Insta-Reaction” post for each episode right after viewing, to share some initial thoughts, questions, reactions — you name it.

Jamie and Claire use Claire’s medical knowledge to devise a scheme to stop a deal which could fill the war chest. When Claire learns Jamie has gone back on his word, the couple is met with dire consequences.

Even knowing what will happen, I kept hoping it wouldn’t.

But let’s start at the beginning. It’s nice to see Claire and Jamie talking through their problems, rather than being permanently divided. Jamie makes clear that he’s honoring Claire’s request to spare Randall not because of any debt he owes her, but because he himself has a stake in Frank’s survival. If things go badly and they’re unable to stop the Rising and the devastation of Culloden, Jamie wants to be sure that Claire has a man who loves her to protect and care for her and the baby. He makes Claire promise to return to her own time and to Frank, if Jamie should die. Sob! 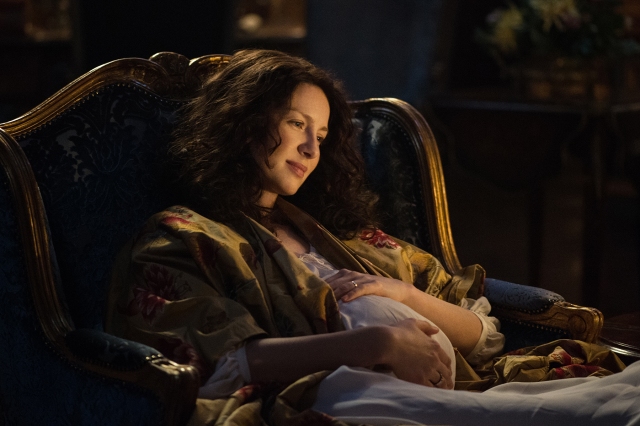 The plan to interfere with the wine deal between Charles and the Comte St. Germain is complicated, relying on Claire’s use of herbs to try to fake a smallpox outbreak on the ship carrying the wine. I actually prefer the TV version of this scheme to the book version, which is more drawn out and involved Jamie actually sailing on the ship from Portugal. The episode gets the job done, but in a more condensed fashion. The end result is the same – Charles is ruined financially. 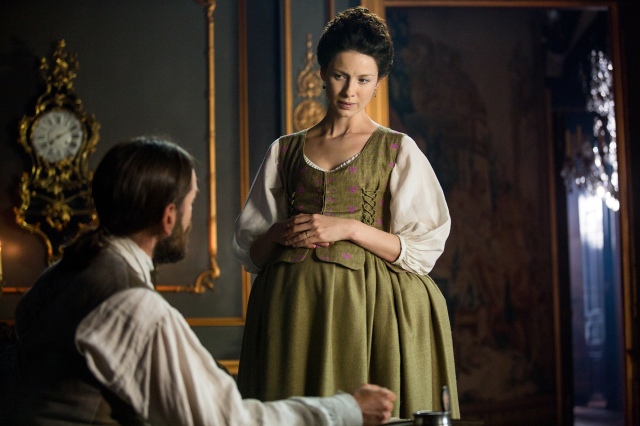 Meanwhile, Claire is getting close to her due date and is sporting a spectacularly huge baby bump, but that doesn’t keep her from her work at the hospital. Hanging out with the society ladies — whose idea of social justice is getting the police to move poor people out of desirable neighborhoods so they don’t spoil the scenery — is upsetting to Claire, so she works at the hospital even harder, hoping to distract herself while Jamie is out on his wine adventure. Mother Hildegard is worried about Claire’s health and forces her to rest. Claire is having some spotting, which Mother Hildegard assures her is normal at this stage of pregnancy — but her face tells a different story.

Finally, Claire comes home to discover Jamie is gone. He’s left her a note of apology — he’s gone off to duel Randall after all. Claire rushes after him in the carriage, clutching her belly the whole time. This is not good. She arrives mid-duel, and doesn’t dare to cry out for fear of distracting Jamie and causing either his death… or Frank’s. Jamie wounds BJR in the crotch (okay, admit it, it’s awfully satisfying to see the blood pouring out), and Claire begins to bleed profusely as well. She screams out Jamie’s name just as the gendarmes arrive to arrest Jamie for dueling, and Claire passes out in a servant’s arms. 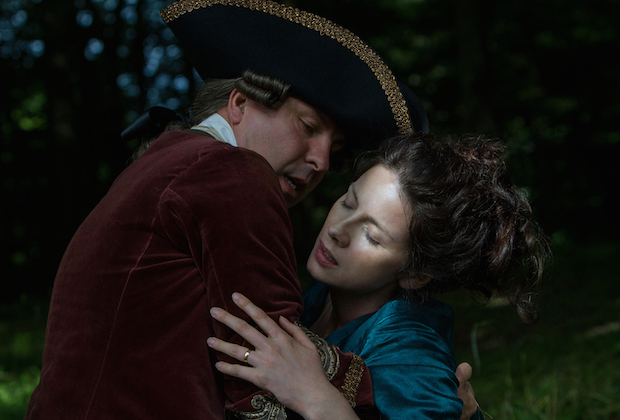 This is not good at all.

Damn. Even having read the book, I wanted things to be different.

Beautiful acting all around. Claire and Jamie’s intimate moments are sweet, sensual, and loving. I adored the scene of Jamie talking to Claire’s belly. Hi, it’s me, I’m your dad! What a cute moment… tinged only by the knowledge that bad things are coming.

Great moments for Fergus in this episode too. Is that kid the epitome of adorableness, or what? I loved the way the fateful moment in the brothel was done, with Fergus exploring the room with the red coat hanging in the corner. Never has a piece of clothing been so threatening! Ah, wee Fergus is just so precious. 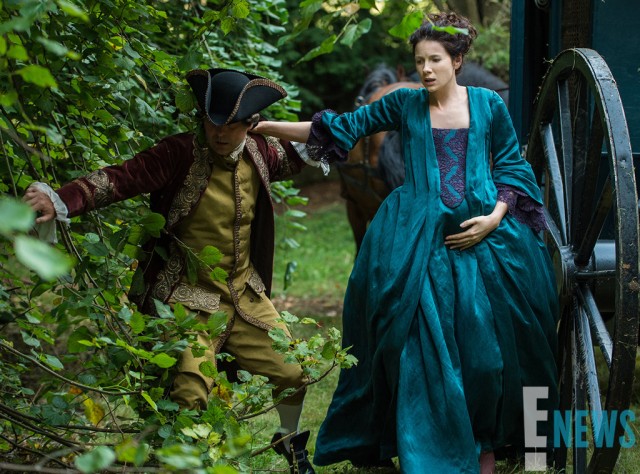 Was Claire wrong to rush after Jamie? She couldn’t change the outcome of the duel, and was already experiencing some pain and bleeding before she even rushed off in the carriage. Would she have begun hemorrhaging anyway, even if she’d done nothing? It certainly looks that way, but dashing off like that was not a wise choice. I understand her emotional distress, but still, she must have known that her health and the baby’s health were already at risk. Oh, Claire.

Then again, I’m sure she sees it as Jamie’s fault, breaking his promise to her with no regard for their marriage or for their baby. 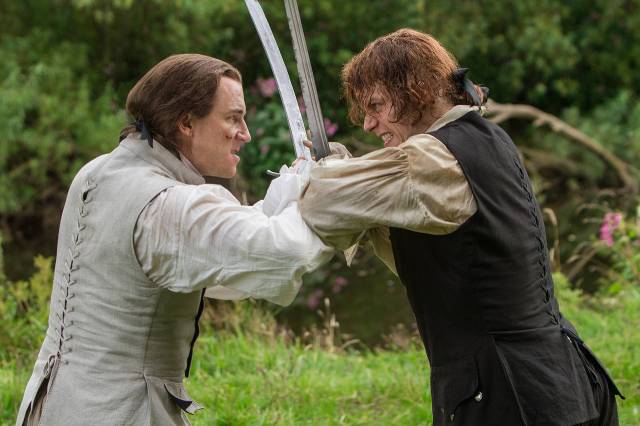 The truth about why he went ahead with the duel will come out next episode, I’m sure, but this is one more horrible moment that has the potential to damage the love and trust between Jamie and Claire. They spend so much time and effort worrying about other people — and the entire future of Scotland, for f*ck’s sake — that they seem to put their own lives and marriage on the back burner.

Wasn’t Murtagh in fancy clothes hilarious? He’s the last man on earth to want frills and flowers. What was the point of his dressing up? Now that I think about it, I think the idea was to implicate Les Disciples, the band of aristocrats who carry out such thuggery as rape and theft for the sake of a thrill — so if Murtagh and the other men carrying out the wine theft were dressed in fine clothing, Les Disciples might be blamed. It wasn’t really clear during the episode, I didn’t think, but now I guess it makes sense. And anyway, it’s worth it to see Murtagh all fancy-like.

Final thought: I’m so glad Jamie finally brought Murtagh into the loop. He’s been operating on blind faith when it comes to  Jamie and Claire’s scheming, but he’s certainly more than earned their trust and deserves to know the truth about Claire and her time travel. It was a sweet moment between him and Claire, and I do love that he punched  Jamie in the face before being okay with the secret keeping. 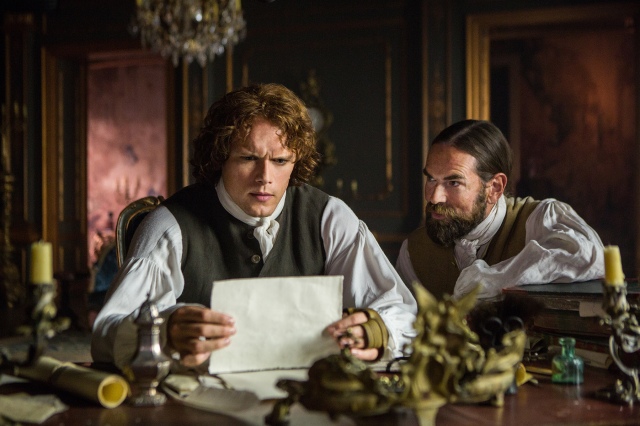 All in all, another terrifically well-done episode!